Fires burned in South Minneapolis throughout the night, destroying homes and businesses. 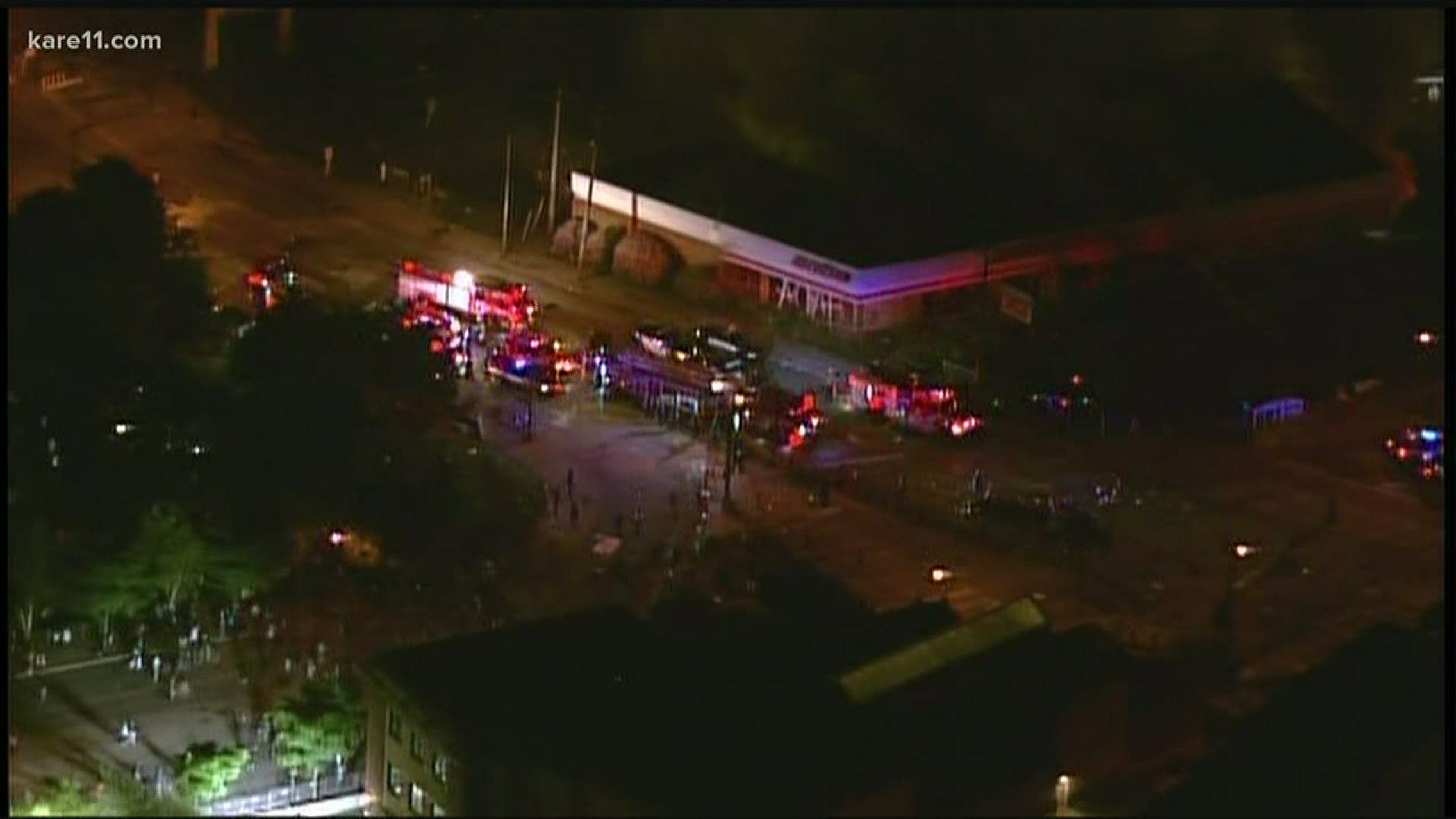 MINNEAPOLIS — With demonstrations entering a second day following the police-involved death of George Floyd, Minneapolis Police Chief Medaria Arradondo is urging people observing or participating to do so with safety in mind.

Arradondo says he is supportive of peaceful demonstrations, but says a small minority of those out on the streets are not focused on that.

A spokesperson for the mayor confirmed Thursday morning that Frey had requested support from the Minnesota National Guard.

When previously asked by KARE 11's Julie Nelson whether or not the Minneapolis Police Chief would consider employing the help of the National Guard, he said he hopes it doesn't come to that, but if a public safety need arose in which he had to do so, he would request additional resources.

The chief says a request for any National Guard resources, however, would have to come from the Mayor of Minneapolis, Jacob Frey.

RELATED: Frey pleads for protestors to 'keep the peace'

"Yes, absolutely, if I need to reach out and request those resources ... and actually that would be an undertaking that Mayor Frey would have to do formerly to request that with Governor Walz ... certainly then that is an option," Arradondo said. "I'm hoping that we don't have to get to that point. I'm hoping that those that are engaging in this negative behavior ... that they cease in doing that, and that we can allow a space for folks to gather peacefully and assemble. Certainly that is an option that I have."

The chief said the "vast majority" of people have been peaceful, but there was at least one incident on Tuesday evening involving a breach of police department property where he approved the use of tear gas.

"I did direct our officers to deploy gas once a secure fence was breached, and those individuals, again not all, but some of those individuals were in our secure parking facility which had access to our Minneapolis squad cars and weapons," Arradondo said. "I was concerned about the personal safety of not only our officers, but of course those who were in attendance and the general public who was still out there observing."

Arradondo says he has instructed his officers to keep a level of restraint.

"The Minneapolis Police Department will continue to ensure the safeguards of everyone's First Amendment," Arradondo said. "But that cannot be at the expense of others' personal safety. So I'm urging all those who participate in these very important gatherings to do so and to be mindful of others' personal safety, their space, to be respectful. We cannot have members of our community engaging in destructive or criminal types of behavior."

KARE 11 has had crews on the ground throughout the day following the Minneapolis Police Department's press conference.

Crews described continuing tension from groups of individuals well into Wednesday night, with reports of destruction, and many people continuing to arrive as the evening progressed.

KARE 11 Reporter Deevon Rahming was live on the scene Wednesday night, near MPD's Third Precinct, describing the situation as having gone from "bad to worse" since the more peaceful demonstrations earlier in the afternoon.

Police used tear gas and flashbangs to divert individuals as Rahming reported looting in some of the properties within the local area, including a local AutoZone which was reportedly on fire around 10:30 p.m. spewing toxic fumes from explosive materials inside that made it difficult to breathe according to Rahming.

According to Rahming, police were forced to man the epicenter of the continuing protests, near MPD's Third Precinct, and unable to stem the tide of looting nearby as a result.  However, Rahming went on to note that some of the nighttime demonstrators took it upon themselves to block other individuals seeking to steal from local shops and businesses.

When asked of one man whether he was the owner of a tobacco shop targeted by looters, the man reportedly replied, "no, but I'm just sick of what is unfolding out here because this is not why we are out here, and this is not what we are asking for."

Rahming describes the dichotomy of the now nighttime protest saying there are people who want a more peaceful protest, desiring to keep the peace and order, while there are others still who have grown increasingly hostile as tensions continue to unfold.

Earlier in the morning, Rahming described a far different atmosphere of peaceful protesters centered around the intersection where the initial arrest of George Floyd took place. Scenes of laying flowers, chants and a makeshift memorial abounded.  However, ever since the call was made around 2 p.m. to move the demonstration to MPD's Third Precinct, things started to go downhill according to Rahming. It wasn't until roughly 5 p.m. that police began to take matters into their own hands converging on the demonstrations with tear gas, flashbangs and raw manpower.  Some demonstrators responded by throwing rocks and bottles forcing some to run and take shelter, including our KARE 11 crewmembers - with police attempting to manage the crowds from the rooftops above, and the riot lines below.

A state official tells KARE 11 that the state has deployed Minnesota State Troopers to assist the scene in Minneapolis.

St. Paul PD says they have responded by sending around 40 officers to help aid the Minneapolis Fire Department as they put out fires and work to keep people and property safe.

As for the investigation into Floyd's death, now being handled by the Minnesota BCA, the chief said he has not seen body camera video from the officers involved, and has no timeline for its release.

Chief Arradondo also responded to Mayor Jacob Frey's emotional news conference earlier in the day, where he called on the Hennepin County Attorney to file charges against the arresting officer.

"What I observed, those actions from those former four officers in no way reflect the values, the vision and the culture that i want to change here with the Minneapolis Police Department. And so many of our men and women work each and every day to try to build those relationships of trust," Arradondo said.