Going Underground; A Look at the Tunnels Under West Fort Hood

Once a top secret location that stored nuclear and atomic weapons for 20 years, the intricate tunnel systems carved under the hills of West Fort Hood are now used for training. 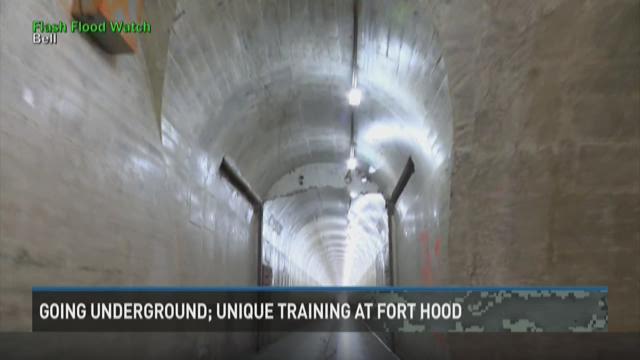 FORT HOOD – Originally known as ‘Project 76’, miners carved an intricate tunnel system into the hillside of what is now West Fort Hood. At the time, they had no idea where or why they were building the tunnels.

Completed in 1949, the secret underground complex was one of only seven atomic and nuclear storage facilities in the U.S.

“There was a guard force outside. It had guard towers, machine gun pillboxes, the whole nine yards. It was so secretive even the guards weren’t allowed inside it,” said Gene Bauer, a Fort Hood Range Manager.

More than 90 feet underground, the tunnel corridors stretched 20 feet wide with 30-foot ceilings – big enough for vehicles to travel the tunnels. “The facility was completely self-contained. It had living quarters and a kitchen area. It has its own power and even a backup power system so they could be completely contained,” said Bauer.

For 20 years the tunnels remained a top secret location where atomic weapons were stored, maintained and repaired.

In 1969 the tunnel complex was deactivated by the Department of Defense, and the atomic weapons were removed. After major safety modifications, like the removal of asbestos and sealing the lead paint, the tunnels were reopened in 2003 as the Fort Hood Underground Training Facility.

“The combat environment for soldiers now days brings them in contact with these underground facilities all over the world. So, a need for a facility like this was obvious,” said Bauer.

Bauer says this complex is the only underground tunnel system in the U.S. specifically used for training, which is why units and agencies travel from across the nation to train in the Fort Hood tunnels.

“The training in this facility is unlike any other facility. There is no other range in the world where you have to worry about how much oxygen there is to breathe,” he said.

The underground facility is mostly used by soldiers going through different training scenarios, but other outside agencies also take advantage of the unique underground environment.

“Pretty soon Homeland Security is coming, and they’re going to use it for an urban search and rescue,” said Bauer.

Scenarios can range from a simple day-long exercise to complex training that lasts a few weeks, like a subway system that has collapsed.

As a safety backup, a specialized unit with the Fort Hood Fire Department called Tunnel Emergency Rescue Team, or TERT, is on standby whenever training is being conducted at the facility.

“The purpose of this [TERT] is so we can cover the Army and other DoD entities who want to come out here and train in underground operations,” said Captain Kevin Kees with the Fort Hood FD. “Not only does it benefit the department, but it benefits the Army.”

This 24-man crew trains at the tunnels often to prepare them for a worst case scenario, such as an explosion and tunnel collapse with people inside.

“I’ve done confined space rescue training, but I haven’t done anything at this magnitude,” said fire fighter Joey Dominguez, a new TERT member. “It’s dark and it’s huge. You definitely have to have your bearings inside there, otherwise you get turned around really quick.”

While the tunnels were once mysterious and filled with rumors of things such as alien research or a corridor that reached the Gulf of Mexico, Bauer says there’s nothing secret about the tunnels anymore.

“There are no UFOs,” he smiled. “It’s just a tunnel system soldiers can use to train on in a unique environment.”