Goldfish are a regulated invasive species in Minnesota, meaning you can buy, sell and transport them, but can't release them in public waters. 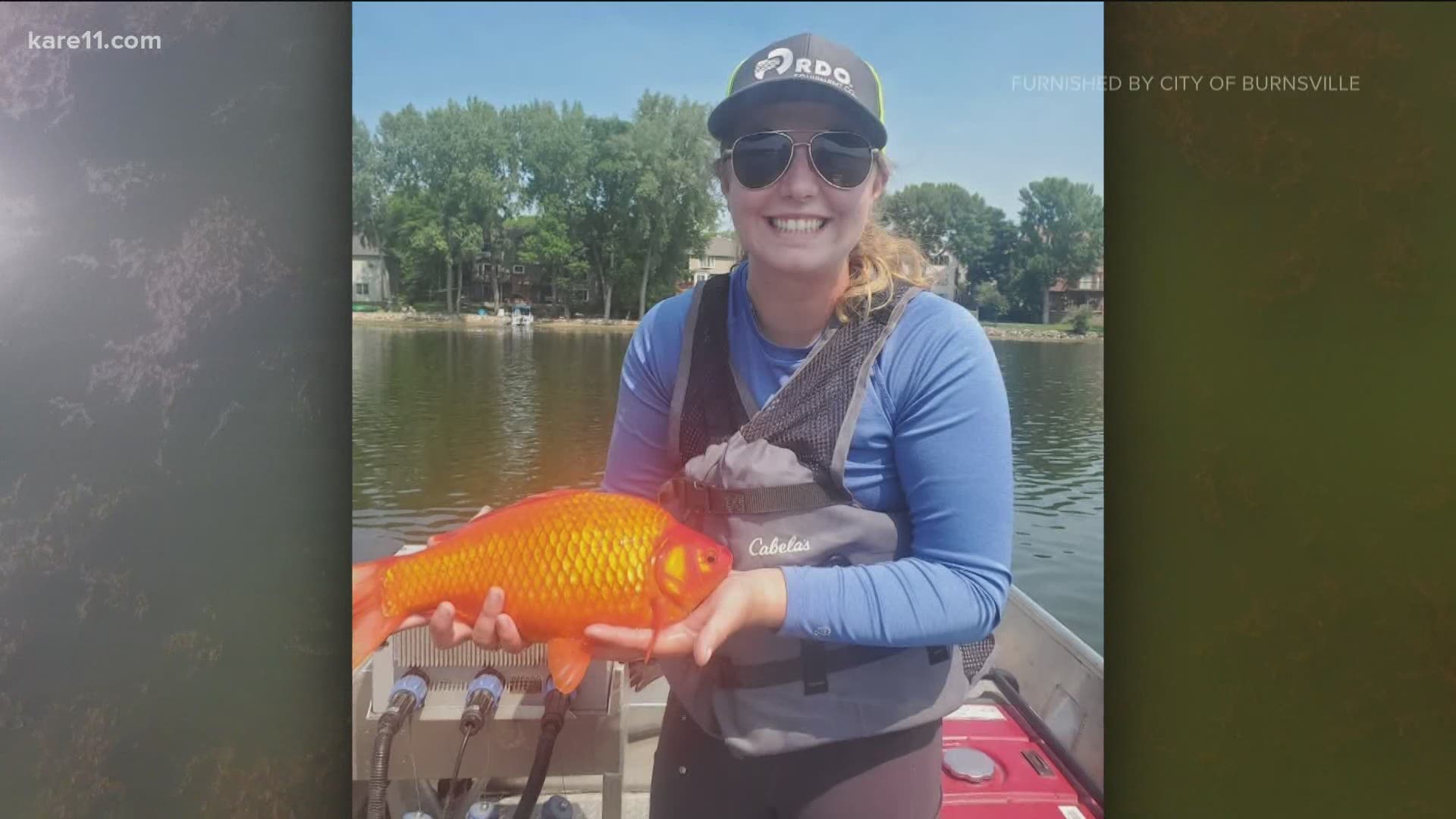 BURNSVILLE, Minn. — You'll want to think twice before dumping that county fair goldfish you won into a nearby stream or pond.

The City of Burnsville tweeted out some pretty shocking photos Friday morning, of massive, overgrown goldfish found in Keller Lake.

"Please don't release your pet goldfish into ponds and lakes! They grow bigger than you think and contribute to poor water quality by mucking up the bottom sediments and uprooting plants," read the post.

It might seem harmless to release your unwanted pet goldfish into a nearby waterway, but you could end up doing serious harm to the local ecosystem.

Please don't release your pet goldfish into ponds and lakes! They grow bigger than you think and contribute to poor water quality by mucking up the bottom sediments and uprooting plants.
Groups of these large goldfish were recently found in Keller Lake. pic.twitter.com/Zmya2Ql1E2

Burnsville's Natural Resources Specialist Caleb Ashling got a chance to hold some of these massive goldfish during the last two times contractors made their way out to survey Keller Lake.

"I knew they could get a little bit bigger than what we see in the pet store, but it is hard to imagine that these little tiny animals can grow to that size," he said.

"Between our two rounds of surveys we've caught 28 of these very large goldfish," Ashling added. "The largest I believe is about 15 inches in size and many were kind of close to that range, so they're pretty significant fish."

Ashling said the city got wind of the gold fish after residents called to report them.

"It seemed like there were increasing reports of large groups of them," he said. "And we've been doing a lot of water quality improvement projects at the lake and we wanted to try to protect those investments by getting a good assessment of what was going on with the goldfish that were here and being reported."

"They're quite brightly orange, at least some of then and certain times of year when the water is clear, you can see them relatively well," Ashling said.

Despite their comical size and traffic-cone orange, they're not welcome here, or in any body of water that's not a tank.

"The biggest problem is that goldfish are bottom feeders, so they like to muck around in the bottom and that uproots a lot of the aquatic plants which help provide a lot of habitat for other fish and animals," Ashling said. "And in general they muck up all the sediments which release nutrients in the water and that can drive a lot of algae blooms."

And that's the fishy takeaway from this all, is that Burnsville has now gone viral--saying compassionate release of your pet is not really showing compassion to nature as a whole.

"We were caught a little off guard about the national interest, but it's great people are learning more about some of the dangers or harm that pets can cause if they are released into the wild," Ashling said. "And hopefully learning that releasing goldfish or any type of pet into the natural environment can cause a lot of unintended consequences."

According to the Minnesota Department of Natural Resources, goldfish are considered a regulated invasive species, meaning you can buy, sell and transport them, but you can't release them in public waters. That is illegal, according to Ashling.

Because they're part of the minnow family, goldfish can easily work their way through city storm water ponds and into lakes and streams, according to the DNR. They can rapidly reproduce and survive harsh conditions, creating headaches for the municipalities that have to invest in their removal.

If you really want to dispose of your goldfish or other animals that are invasive in Minnesota, the DNR recommends finding another owner or reaching out to a veterinarian or pet retailer for guidance on humane disposal.

If you see something you believe is an invasive species, take a photo and note the exact location before contacting a local DNR specialist or fisheries office.