Heart of Central Texas: The Legend of Hico's Billy the Kid

HICO - His statue stands tall and proud in the middle of town and a gravestone with his name lies just a few miles down the road. It is clear the town of Hico is proud to claim a legendary outlaw. 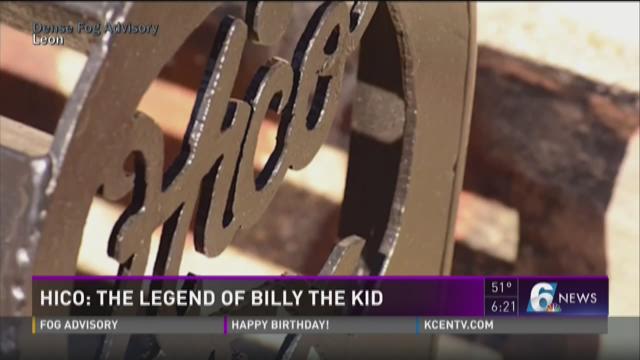 HICO - His statue stands tall and proud in the middle of town and a gravestone with his name lies just a few miles down the road. It is clear the town of Hico is proud to claim a legendary outlaw.

“When you ask these people what are they doing in Hico Texas they will tell you it’s because of Billy the Kid museum,” says Sue Land, Director of the Billy the Kid Museum.

The legend goes Billy the Kid was a wild outlaw, an escape artist and a murderer before the age of 21. The state of New Mexico claims the western legend died in a shootout with a town sheriff in the late 1800s. A grave and museum in Fort Sumner, New Mexico serves as their proof the legend is true.

But Hico believes a different story about what really happened to Billy the Kid the night Sheriff Pat Garrett claimed to have killed him.

“He shot and killed a young man by the name of Billy Barlow who had a beard who had a dark complexion plus the deputy marshal there that night that told Pat Garrett that he killed the wrong man and he filed a report stating that that nobody bothered to look at,”says Land. “No he was not killed. He was wounded and he did escape. He made his way with the help of some of the town people to a sheep herders camp where he recuperated until he was ready to travel.”

Land says historians and researchers have tracked Billy the Kid’s travel to Mexico and his return to Texas in the early 1900s when he finally settled in Hico for 17 years.

“He never told anybody who he was until 1950 when a detective from Florida came looking for him because he had been told this was Billy the Kid and this is where he lived in Hico Texas, went by the name of Brushy Bill, William Henry Roberts,” says Land.

“He showed up here looking for Brushy and Brushy refused to talk to him until the third time and then he agreed to talk and tell him his story and how he wanted his pardon that he felt like had been promised to him back in the 1800s by the governor of New Mexico and he needed Morrison’s help to prove it. Morrison set out to prove one way or the other Brushy Bill was or was not Billy the Kid and to his satisfaction he proved it,” says Land.

Land says scars and marks on Brushy Bill’s body matched those of Billy the Kid but even after a trip to New Mexico to prove who he was, no one believed him.

“The Governor wouldn’t look at any of the evidence or anything and just claimed that Billy was a sick old man and Billy was sent home and a few days later he died. He had a heart attack here on the street here in Hico,” said Land.

In recent years, new historians have taken an interest in the Brushy Bill theory. According to the Billy the Kid Museum in Hico, many believe the story but proving it is nearly impossible.

“Now the historians are saying okay we will change history. We will state that Pat Garret did not kill Billy the Kid but we will not say that William Henry Roberts known as Brushy Bill was Billy because you need a DNA,” says Land. “We could take a DNA from Brushy’s bones but there is no living descendant so it wouldn’t do any good. You can never prove that.”

Even without solid proof, Hico has become a tourist attraction for thousands of visitors from all over the world. The Billy the Kid Museum has become the main attraction in town. Land says there is a certain fascination with the legendary outlaw’s life.

“They are rooting for that 14-year old boy to have made it out of New Mexico and made a life for himself and they really enjoy hearing our side of the story,” says Land. “He was a vision of what every young man wanted to be. Wild and free. If they’ve gone to New Mexico first, they come here and they end up saying we like your story better. Or they come here and say now we’re going to go hear New Mexico and we tell them don’t tell them you’ve been to Hico, you might get run out of town.”

It may never be proven whether or not Brushy Bill was Billy the Kid but Land says they don’t need it. The story is enough.

“We don’t need any more proof. New Mexico does. They don’t like us a whole lot but that’s okay we don’t care,” says Land.