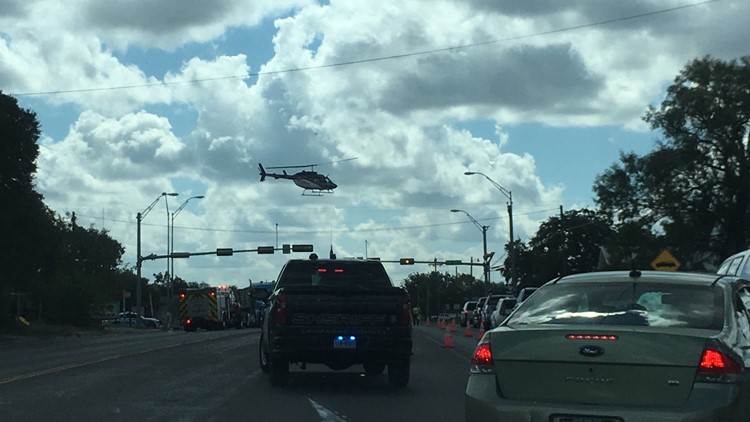 KEMPNER, Texas — A high-speed chase that began in Lampasas ended with a stolen car lodged under semi-truck in Kempner Monday, police said.

The Lampasas Police Department received a call from OnStar around 10:15 a.m. saying a customer's 2017 Chevrolet Equinox that was reported stolen in Killeen had a GPS signal coming from the Lampasas Walmart.

Three officers responded to the parking lot where they found the car parked, locked and unoccupied. They were told a black 2015 Kia Soul that was parked by the Equinox had been "acting suspicious" while driving through the lot, according to LPD.

LPD said one officer followed the Kia before it accelerated out of the parking lot and started driving east on US Hwy. 190 despite the officer's attempts to stop it.

During the pursuit, the officer found the Killeen Police Department had listed the Kia as a stolen vehicle too, LPD said.

The Kia reached speeds of 115 miles per hour before the Texas Department of Public Safety used a tire deflation device near the Lampasas Bridge, LPD said.

The car hit the device, deflating at least one of its tires but continued speeding into Kempner.

Traffic was stopped at the FM 2313 red light where the Kia's driver tried to pass to the left but hit a semi-truck that was turning onto US 190 west from FM 2313 south.

LPD said the Kia hit the truck's trailer, lodging itself under the truck and against its rear wheels.

The truck's driver was uninjured, but both of suspects had to be flown to Baylor Scott and White Hospital in Temple for their injuries.

The LPD Investigations division determined Altamirano and Craven acted alone in bringing the stolen cars to Lampasas. The department is still working to determine their motive.

Charges against the suspects are anticipated following their release from the hospital, LPD said.