HOLLAND - In a small town like Holland, school spirit is town spirit. The Hornets mascot looks over the streets of downtown from the water tower and the local markets keep newspaper clippings of the latest high school sports achievement pinned to the bulletin board. 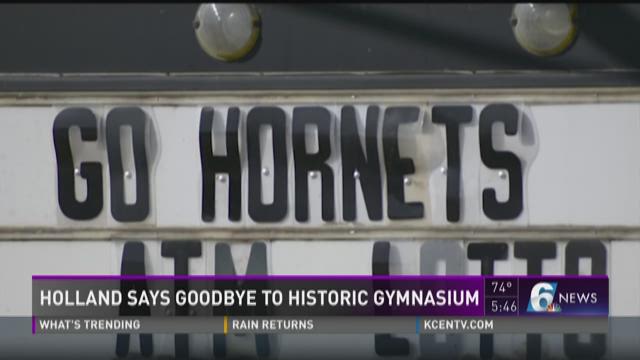 HOLLAND - In a small town like Holland, school spirit is town spirit. The Hornets mascot looks over the streets of downtown from the water tower and the local markets keep newspaper clippings of the latest high school sports achievement pinned to the bulletin board.

“We all played in the gym," says Blaire Starke, Holland High School Class of 1955. He remembers eating his first pasteurized bottled milk in the cafeteria that was located underneath the bleachers of the historic gym built in 1939.

“Whenever we’d turn our plates in to wash them, they’d just rake ‘em out the window to the hogs," says Starke. “We thought we had a pretty good gym back then. Salado’s, when you’d go down the court going west, if you weren't careful, you’d run out the front door.”

Coach Jack Parker coached boys and girls basketball in Holland from 1981 until he retired in 1996 winning 525 games inside the same four walls.

“When I got here in 1981, nobody had went to the playoffs in basketball. The girls went about 10 years in a row after that," recalls Parker.“When I first got here, there were only 2 basketballs in that gym and I went to the superintendent and I said 'I’ve got to have some basketballs' so I bought 18 basketballs and that helped a lot."

Holland's gym served as more than just a sports venue. It was the town's meeting place. Donkey basketball games, proms, dances, plays, recitals and even graduations were held in the same solid concrete building without air conditioning for decades.

Recently, the school built a new gymnasium but the "old" gym remained in use for elementary school students and left unlocked for community use on the weekends.

“Unfortunately, it has outlived it’s ability to provide everything that we need for our school," says Cindy Gunn, Superintendent of Holland ISD.

She says after getting bids for additional repairs and renovations for the building, the school board came to the hard realization that it was in the district's best interest to demolish the old gym and replace it with a new structure.

“We had 82% of the community support the bond so that was a good sign for us that it was okay to do this even though it was something that people felt very strongly about. People have been very supportive knowing that progress has to occur but it’s just really hard letting go," said Gunn.

This summer, the nearly 80 year old gymnasium is coming down and will be replaced in the fall with a new facility that will serve as a band hall, a library and additional classroom space. Before the demolition, residents of Holland came to save what they could of the old gym like planks from the court, bleachers, basketball rims, even the historic hornet painted in the center of the court.

“We grew up here and that was our place to play basketball and everything else," says Frank Wooley."Growth is inevitable. Time to let it go I guess.”

For others like Coach Parker, memories are just enough.

“That’s all I wanted out of it I told Cindy, Mrs. Gunn. She asked me if I wanted something out of there. I said no. I got plenty of memories out of there that’s all I need," said Parker.