I-35 Investigation: Where have the workers gone?

Where are the workers? 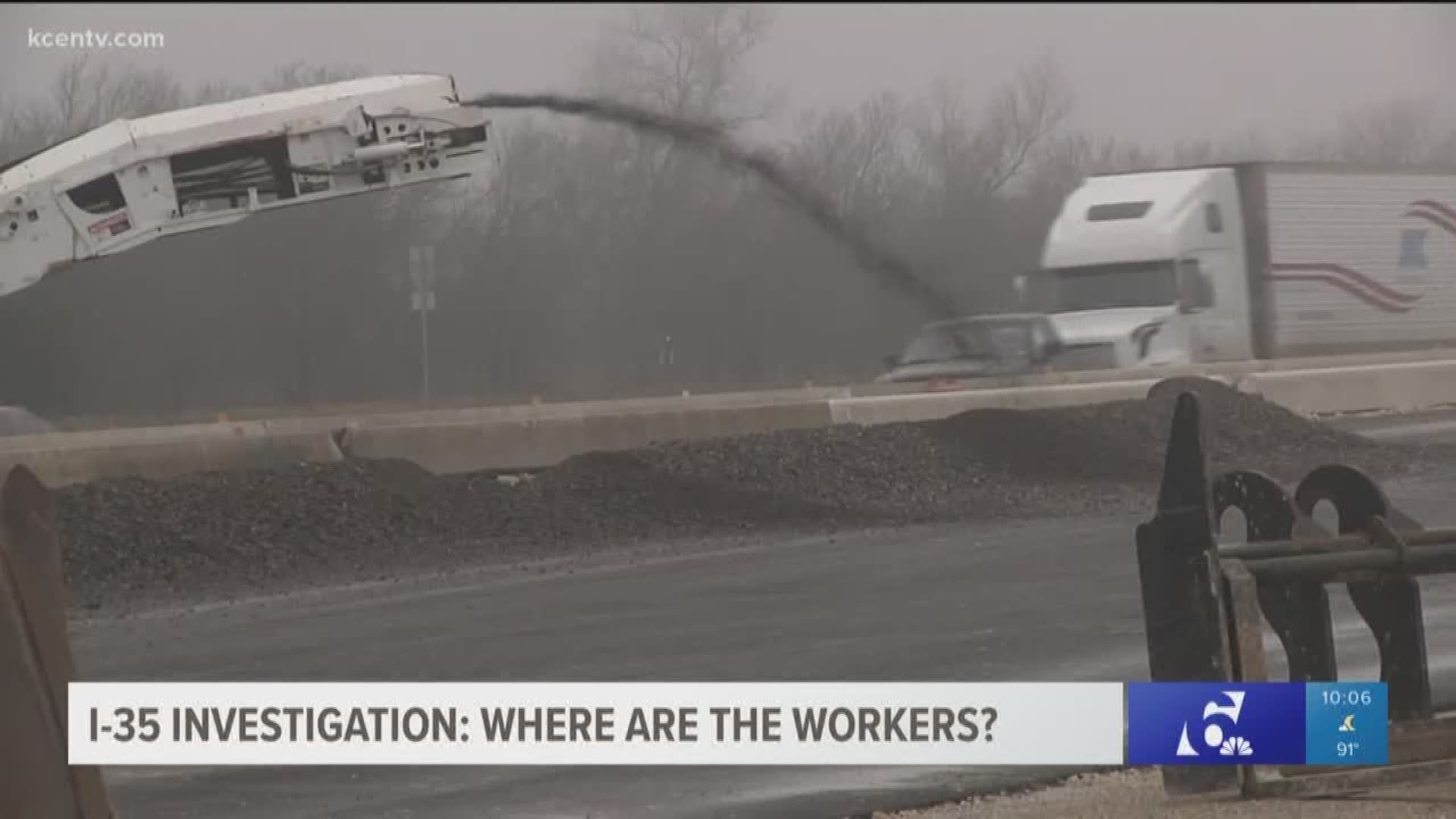 CENTRAL TEXAS — Contractor James Construction, which recently changed its name to PSC Heavy Civil, is responsible for completing three I-35 projects totaling 21 miles across Bell County. The projects are located in Temple, Troy, and Bruceville-Eddy, and in the last two of those projects, the contractor is already facing financial penalties for running late. But while a driver would expect to see all hands on deck, many see the opposite.

“Going towards Troy you see heavy equipment just sitting there for the last three, four, five months that hasn't moved.” Temple resident Cedric Luster said. “You wonder what is going on?”

When Channel 6 drove the highway, some areas had whole crews working, but many others had multiple backhoes, graters, and other machines just sitting, and crews that could be counted on one hand.

James Construction would not return calls from Channel 6 but other contractors in the area were able to provide some perspective. Mitchell Construction Operations Manager Brandon Friedholm told Channel 6 workers are simply hard to find right now.

“What we are seeing is the lack of applications for skilled laborers such as electricians, licensed welders, that type of thing,” Friedholm said. “A lot of the stuff we were hiring out of state. We currently have guys we have hired from Alaska.”

Friedholm said the company works all over the I-35 corridor but frequently has to find people outside central Texas and often outside the state. He said none of the equipment operators the company currently has are native to the area.

And while Friedholm said the company did get more applications for unskilled labor, few of those applications represented “quality” workers.

“We are seeing a lack of the quality of the applications we get in,” Friedholm said. “The people who actually want to work and stay working with us.”

But despite the issues getting workers, Friedholm said those issues do not slow down their company after they get started on a job. Friedholm said jobs are normally delayed because of weather, the need to get permits, and scheduling conflicts with other jobs that are suddenly awarded. He said they don’t let equipment sit around.

“If we have a job we have the workforce there ready to go,” Friedholm said.

So if this is the case, then what is holding up workers for James Construction? Workforce Solutions Chief Operating Officer Kendall Cox told Channel 6 there are other issues to consider.

Contractors that hire lots of equipment operators are also prone to losing them to better work.

“Pavers, dozer operators, compactors, those skills necessary to do road work are in high demand,” Cox said. “If you think about what has happened recently across the United States with the hurricanes in Texas, Florida, Puerto Rico… they are paying top dollars to bring individuals to work on projects.”

“Given the need for the need for skilled construction laborers across the full suite of requirements, chances are they can go down there for a year and a half, come back here and still get a job,” Cox said. “If (James Construction) was just starting off that portion of I-35 when hurricane Harvey hit… that could very easily be a challenge.”

With James Construction not talking, it's impossible to know how often this happens with operators working on I-35.

“TxDOT does not get into the means and methods of a contractor’s work. The department’s project managers meet with contractors regularly to discuss progress, but do not direct specific work at specific times. TxDOT provides a deadline for the project and may assess financial penalties if those deadlines are not met.”

With TxDOT not monitoring the issue, Channel 6 does not know to what extent it is affecting progress on I-35. Based on how difficult it is for Mitchell Construction to find operators, however, James Construction would have to make a good offer to replace lost operators in today’s job market.