The downtown convention center opened its doors to hundreds of migrant girls as the first group of unaccompanied children arrived in San Diego Saturday. 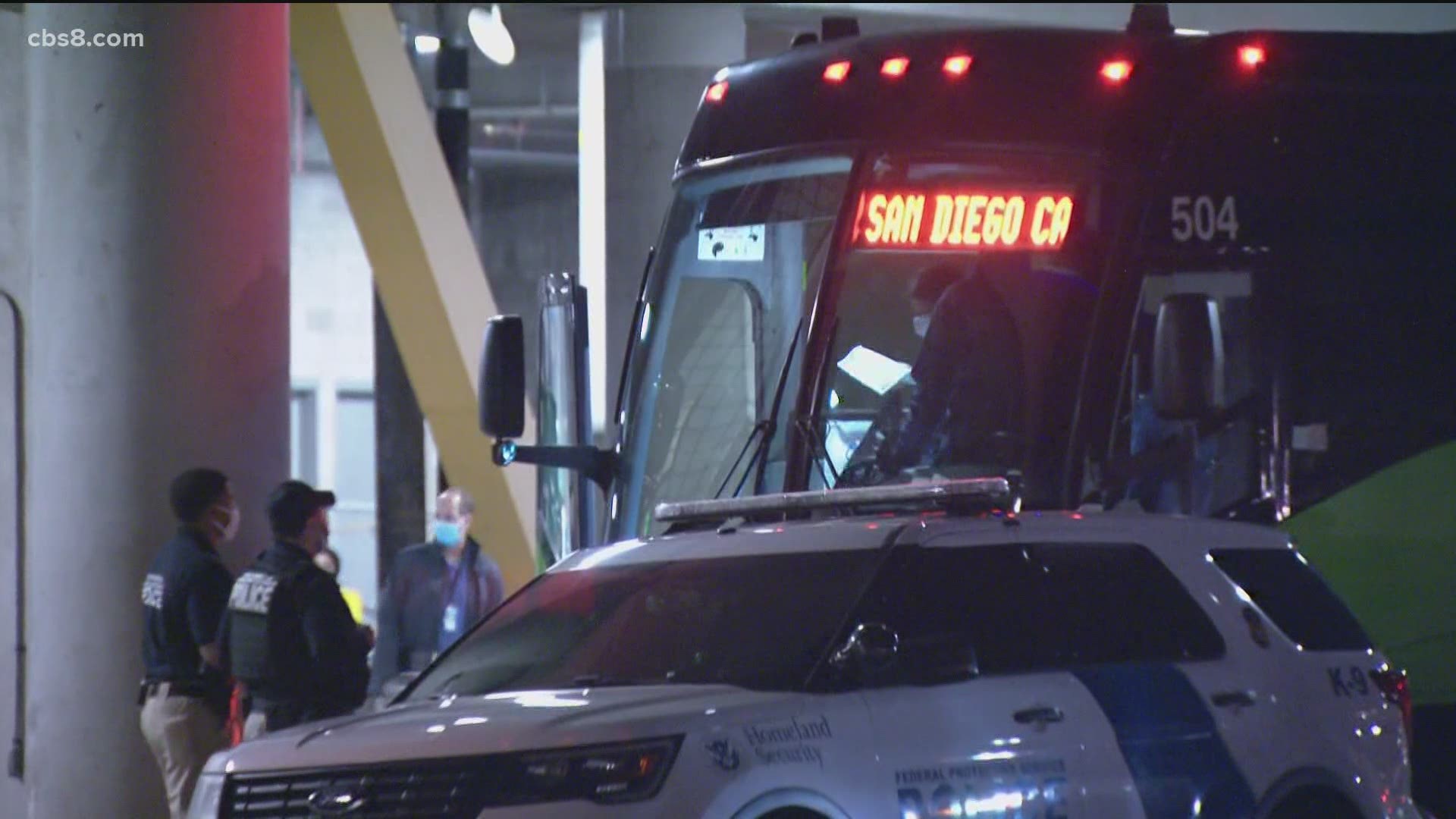 SAN DIEGO — The U.S. Department of Health and Human Services says 500 migrant girls, aged 13 to 17 years old, will be staying in downtown San Diego as their asylum cases are processed inside the convention center. Some of those unaccompanied children arrived Saturday night when a single bus pulled up just after 9:30 p.m. near the loading dock area at the convention center. The bus was escorted by Homeland Security officers.

Saturday morning before the arrival of the children, San Diego leaders and Congress members got an up-close look at the bedding, kitchen and clinic areas that teenage girls, who are part of the first migrant group, will use as their accommodations while they are being processed.

Congressman Scott Peters of California's 52nd Congressional District said, "This is not the answer to immigration reform. This will not be perfect, don’t expect it to be, and border patrol facilities were not built to house children.”

The lawmakers made it known this care will be reimbursed by the federal government.

"This is a collective effort with taxpayer dollars, and we will be as transparent as possible," said San Diego Mayor Todd Gloria.

Leaders got a look at where the group of girls will sleep on rows of green cots and toured a medical intake area that Rady's Children's hospital will help run. The group will be COVID tested and separated with help from CDC staff.

There will be case managers who are also social workers. Staff will have a 15 to 1 ratio with girls. The convention center can accommodate up to 1,450 in what will be an all-girl facility.

Pete Weldy of the Department of Health and Human Services, Administration for Children and Families said, "This is not the first shelter in the U.S., but this is the first emergency influx site in California."

Congressman Juan Vargas said, "These girls arrived in a legal way the law allows them to come forward and to say we are seeking asylum."

In the kitchen, the leaders saw the meals the young girls will eat, including cheeseburgers individually wrapped in foil for dinner on Saturday. The chef said there will be variety of food options. Their next meal will be enchiladas.

"[These are] children who we have a moral duty to make sure that they are welcomed and that they have a safe and secure place to be until we can unite them with their families," said Congresswoman Sara Jacobs, who represents California's 53rd District.

The next group of 250 girls is expected to arrive on Monday.

"Can you imagine the trauma some of these girls have faced on the way here? Can you imagine how difficult it's been for them? So when they arrive thank God in San Diego, we don't have a community that is going to yell and scream and beat up on the bus as they arrive," Vargas said.

The girls can stay here anywhere from 30 to 35 days and this convention center site is expected to remain open until July.

South Bay Community Services is raising money for the girls after they leave the convention center. They ask that donors specify they want the money they donate to be used for that purpose on the page found here.