In less than 24 hours of a Facebook plea, displaced Marine Jordan Taylor and Jilia Arroyo were married and on their way to happily ever after. 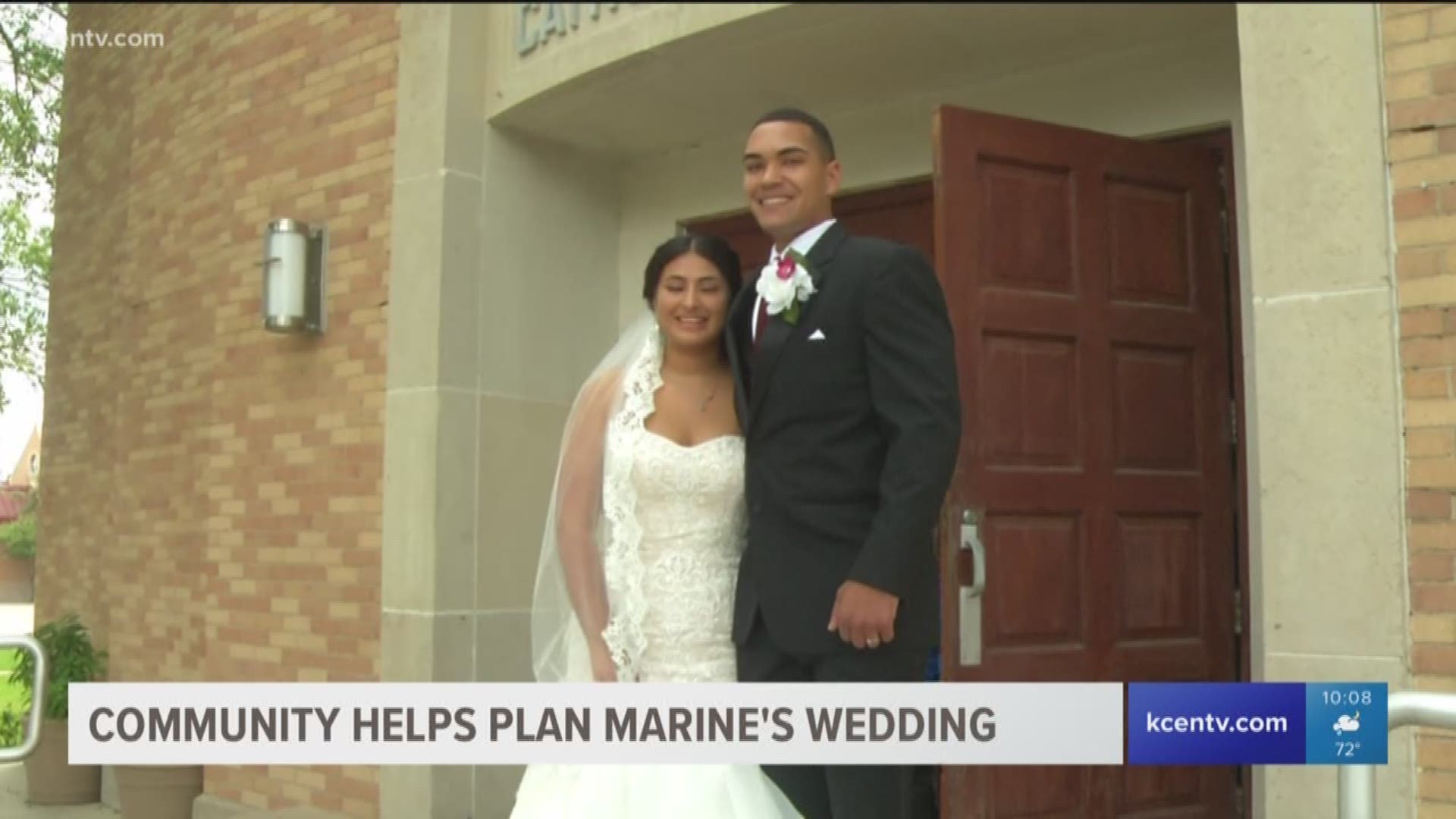 TEMPLE, Texas — After a Marine was forced to evacuate his North Carolina home during Hurricane Florence and his wedding plans were ruined he and his bride-to-be got married Thursday in Central Texas in a last-minute ceremony before he ships off to California.

KCEN Channel 6 stepped in to help Jordan Taylor and Jilia Arroyo tie the knot after seeing a plea for help on social media.

Taylor and Arroyo were planning to marry in North Carolina in October, until Florence ripped through and displaced thousands of residents, including Taylor who was stationed at Camp Lejeune.

Taylor and Arroyo, who is originally from Temple, weren't willing to let Florence stop their nuptials. Almost overnight, several members of the community came together to throw a wedding the couple would never forget.

Johnson's post asked Killeen to step up for a "911 military emergency," and KCEN did just that.

"Killeen friends, I have a 911 military emergency (that) I need your help with please.

"My friend who lives out of town has (a) son in the Marines. He was scheduled to get married in Oct. in North Carolina, but due to the floods he was evacuated. He and His fiancée have decided to get married in Temple TOMORROW AT NOON, because he has to leave for school on Monday.

"They have no photographer, no family to attend, aside from her mom, and no one to share the day with. (Welcome to the military). Let’s show her how we do things as a family. I am also out of town tomorrow, but I am hoping a few of you can help me pull off a beautiful wedding day. (Reminds me of my own) I have a hotel package I will donate to them.

"Can I get someone to go take pictures for them, maybe someone to get a small cake and a bottle of moscato for their “reception” and just go celebrate the occasion with them? Please message me if you can help so we can talk details."

While Aroyo already had a dress and the couple had a church and reception hall, the groom-to-be needed a suit, they needed a cake and they needed a honeymoon.

After Draffin and several other members of the KCEN team reached out to local businesses. 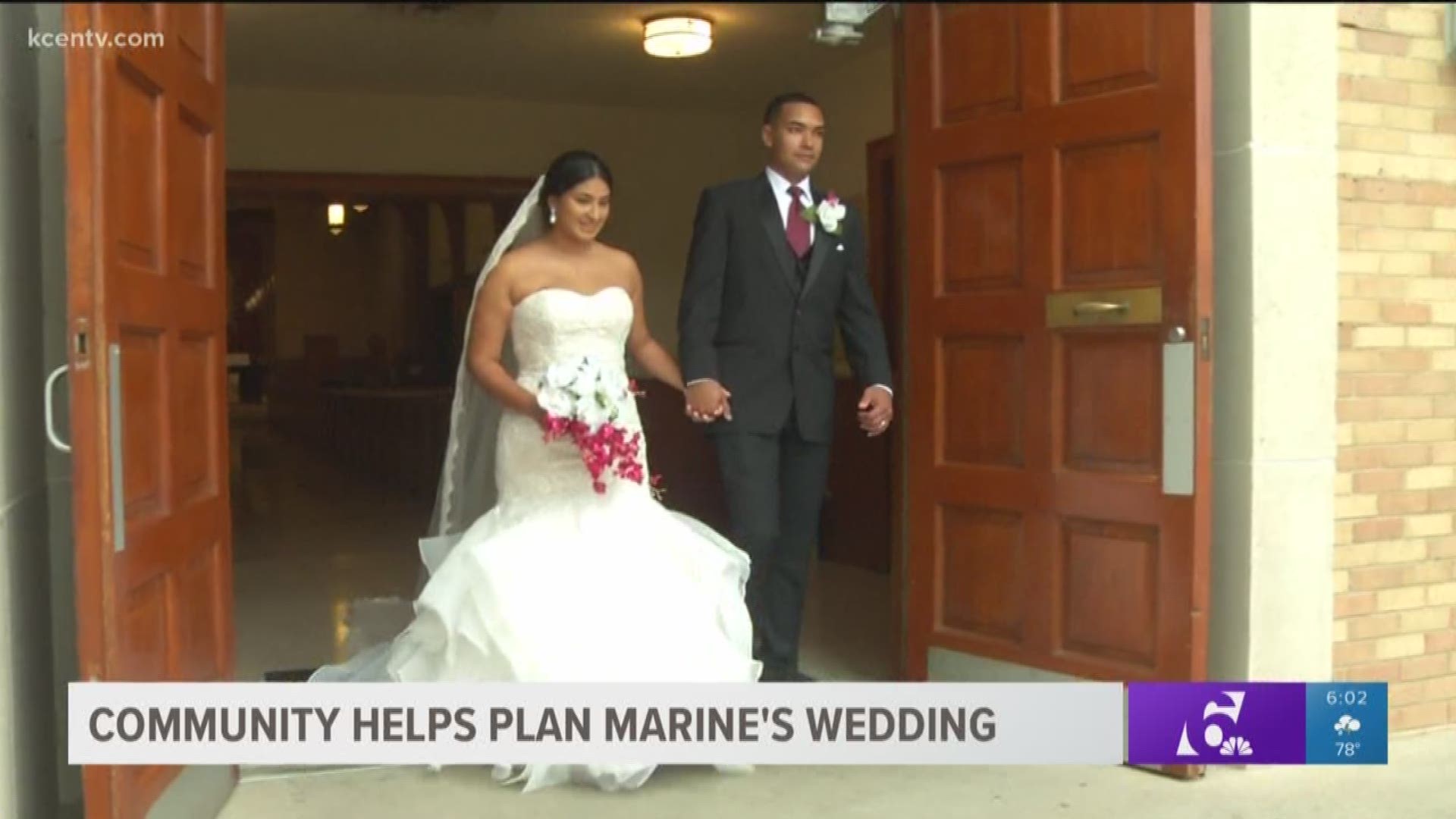 Arroyo’s hair was done by Brittany Parker, whose dad was in the military.

“Being that my dad is a veteran, it’s the least I could do, Parker said.

Salado’s Inn on the Creek donated a bridal suite and a gift certificate for a meal at the award-winning Alexander’s Distillery to the couple for their honeymoon.

“My husband is retired military and my daughter is active duty," Colleen with Salado’s Inn on the Creek said. "I also have several military wives who work here, we’re very happy to be a part of this. So thank you for including us.”

Maria Reed and Chandnee Ulch, of ‘Moving with the Military’, signed on to shoot video and take pictures of the ceremony.

"That's what we do as military spouses, we come together and try to make it happen," Reed said. Ulch added, "when the military needs help we come."

Other's donated decorations and food and a local wedding planner donated her time to the cause.

And then Colleen Kalinoksi, Operations Manager from Inn on the Creek in Salado, took care of the couple’s wedding night suite.

“We have a lot of military families here" Kalinoksi said. "My husband’s retired Army. My daughter’s active duty. My manager Melinda’s husband is deployed. So, we felt honored to chip in and help another military family."

In less than 24 hours of Johnson's Facebook plea, a new military spouse was welcomed into a worldwide community, and Taylor and Arroyo were married and on their way to happily ever after.