TULSA, Oklahoma — A private track coach and retired U.S. Army sergeant first class from Killeen said in a plea agreement he sexually assaulted a 17-year-old girl during a trip to Tulsa, Oklahoma, to meet with college coaches, the Department of Justice said in a press release.

Kerry Sloan, 56, pleaded guilty Tuesday to transporting a minor with intent to engage in criminal sexual activity during a college visit on June 11, 2017, the release said.

Sloan admitted to sexually assaulting the teen, according to the plea agreement. He signed the following statement in the agreement:

"I, Kerry Sloan, admit that on or about 6/11/17 I knowingly transported [redacted], a child under 18 years of age, from Killeen, Texas to Tulsa, Oklahoma, in the Northern District of Oklahoma. I was [redacted]'s private track coach. Although we traveled to attend college visits with track coaches, I intended to have sex with [redacted] without her consent and in fact did have sex with [redacted] in Tulsa without her consent, which is illegal under Title 21, Oklahoma Statues, Section 843.5(E)" 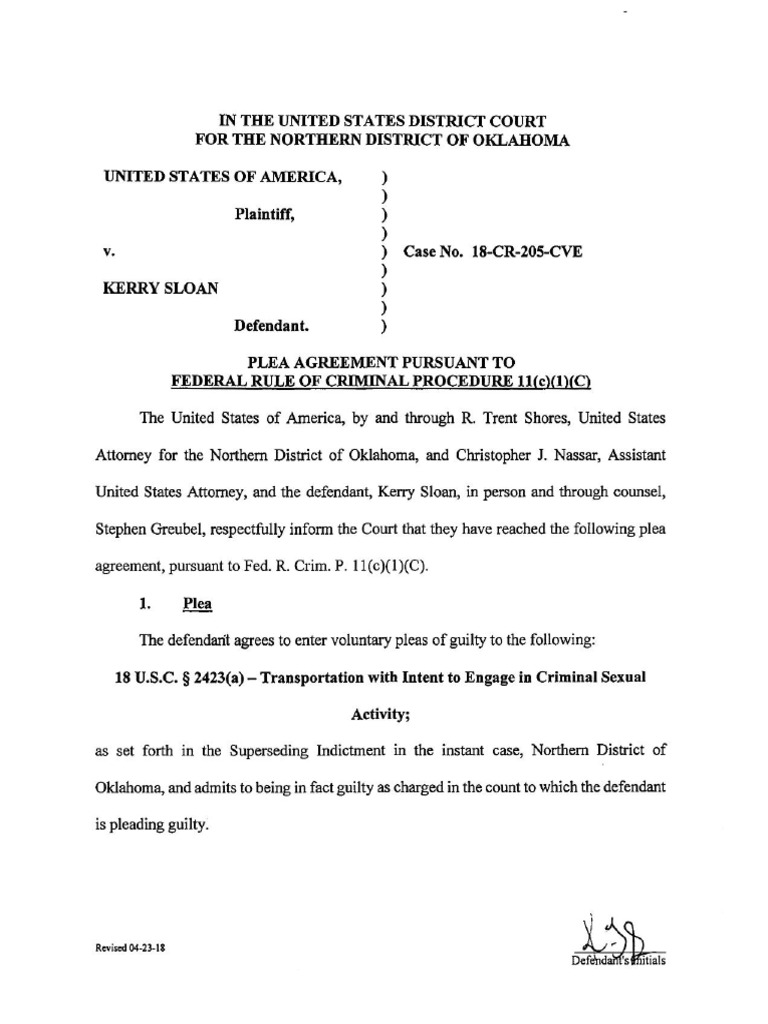 A 911 call was made on the way back to Killeen, and Pittsburg County Sheriff's deputies rescued the victim after stopping the vehicle the two were in, the release said. Since the investigation started, multiple victims from as far back as 1990 came forward to say Sloan assaulted them.

“Kerry Sloan was a wolf in sheep’s clothing. He portrayed himself to parents and children as a trustworthy and caring mentor when in reality he was a danger to young girls,” U.S. Attorney Trent Shores said. “During the course of this prosecution, even more victims than we were originally aware of came forward, claiming to have been groomed and assaulted by Mr. Sloan. His days of preying on unsuspecting families and their daughters are over. Federal prison is his next stop.”

Sloan's sentencing is set for June 26, and the minimum punishment he faces is 10 years in prison, and the maximum is life in prison. He also faces a maximum fine of $250,000. The release said Sloan was allowed to remain on bond until the sentencing hearing, but while on bond, the U.S. Probation Office will heavily monitor him.

According to court documents, the victim accused Sloan of reaching down her pants and touching her while she was asleep on the drive to Tulsa. Additionally, he rented a hotel room with two bedrooms, and the victim said she was having hip pain. The victim also accused Sloan of rubbing lotion on her hip, then taking off her pants and raping her when she fell asleep, court documents said.

The victim's testimony said he raped her again later that night, then she told him to stop and take her home, court documents said. According to her testimony, Sloan refused to stop the car on the drive back when the victim asked, so she called her mother to tell her what happened. Her mother then called the Pittsburg County Sheriff's Office, which eventually stopped the car Sloan was driving, court documents said.

According to court documents, the Tulsa Police Department searched the hotel room where Sloan and the victim stayed, and they found a used condom and a bottle of Viagra. DNA testing did not exclude Sloan as a suspect in the victim's accusations, but he was not arrested after the traffic stop and was allowed to return to Texas, court documents said.

Sloan was officially indicted on a federal charge of transporting a minor with intent to engage in criminal sexual on Oct. 3, 2018, after the state of Oklahoma dismissed its case of a first-degree rape charge, court documents said.

Sloan filed to dismiss the case, claiming the indictment didn't indicate what criminal offense involving sexual activity he intended to commit. Sloan also claimed he was not provided with adequate notice of what he was being accused of and that he couldn't properly prepare a defense. He also claimed the case was not subject to meaningful scrutiny before the indictment was issued. 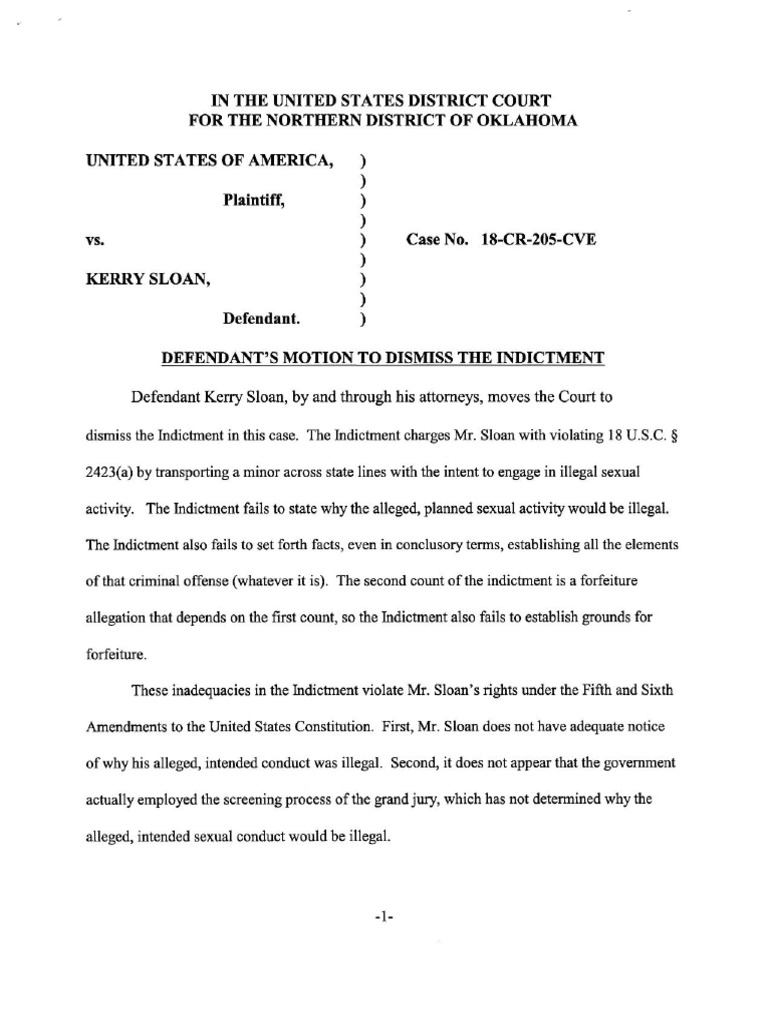 Kerry Sloan's motion to dismiss federal indictment
Sloan was officially indicted on a federal charge of transporting a minor with intent to engage in criminal sexual on Oct. 3, 2018, after the state of Oklahoma dismissed its case of a first degree rape charge, court documents said. This is his motion to dismiss it.

Accusations from other women

Prosecutors said while investigating the federal charge, two other women came forward detailing accounts of Sloan assaulting them in the '90s while they were in the military with him.

According to court documents, commanding officers found sufficient evidence and probable cause in one case, but chose not to prosecute him. In the second case, probable cause was also found and Sloan appeared to receive a non-judicial punishment for false official statements and indecent assault, court documents said. 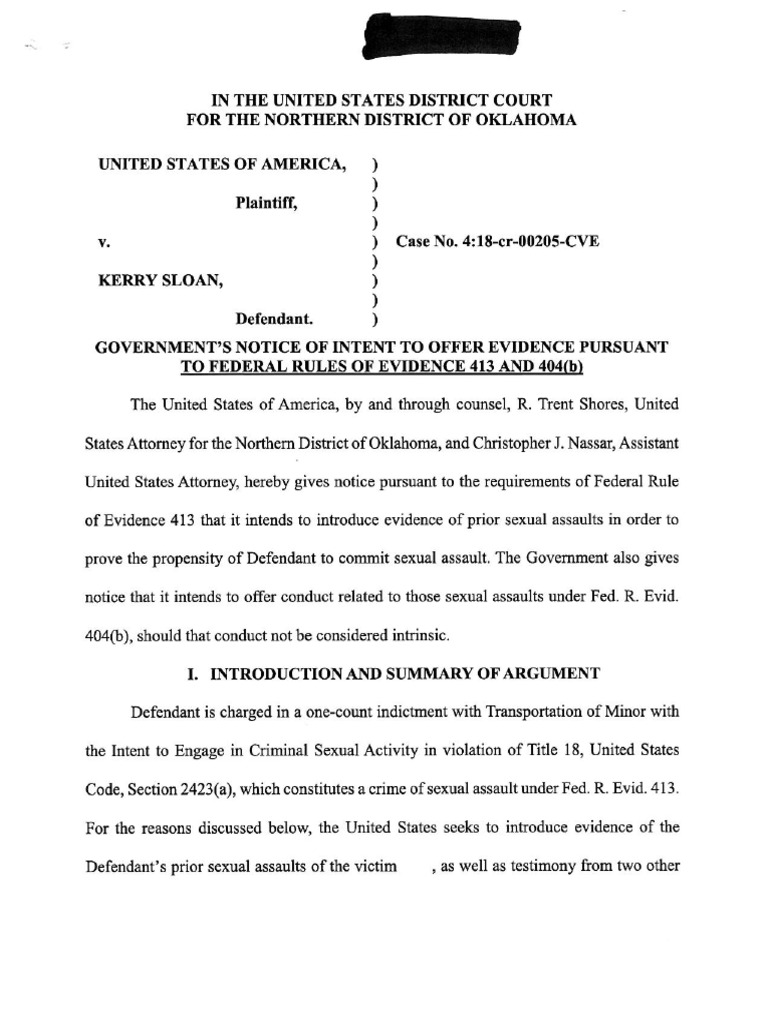 The case was brought as part of the DOJ's Project Safe Childhood, which is a nationwide movement geared toward stopping child sexual exploitation and abuse. For more information about the project, visit its website.