In his lawsuit, the U.S. Army officer alleges two police officers escalated things during a traffic stop, pulled guns on him, then pepper-sprayed and hit him. 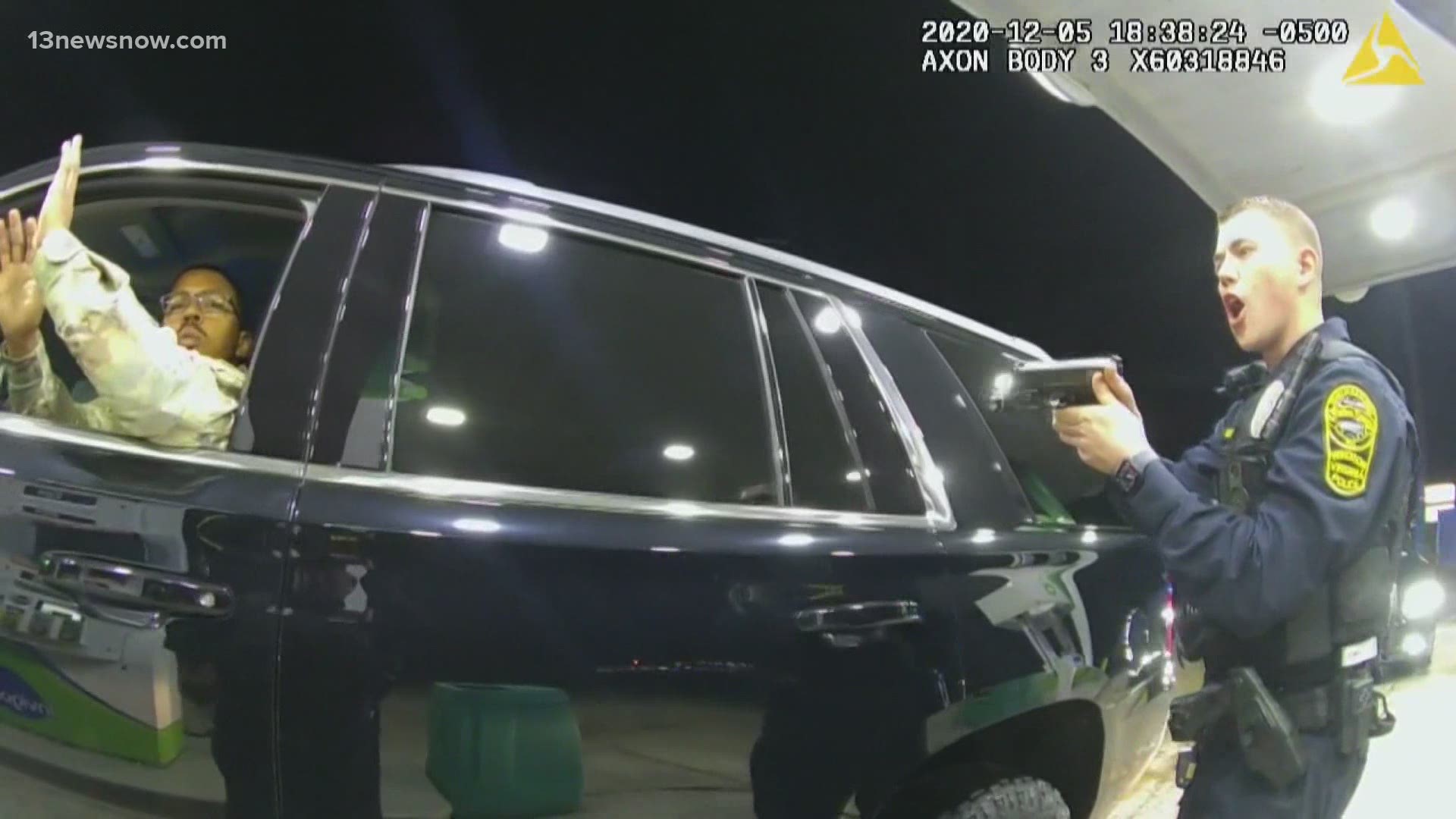 ISLE OF WIGHT COUNTY, Va. — Two Windsor police officers are facing a civil lawsuit that alleges they acted aggressively towards a minority, uniformed Army officer during a traffic stop.

The lawsuit was filed Friday in the U.S. District Court for Eastern Virginia in Norfolk.

Documents from the lawsuit claim officers Joe Gutierrez and Daniel Crocker (the defendants) pulled over a newly-bought SUV for not having a rear license plate on December 5, 2020.

They approached with guns pointed at the car, gave opposing instructions to a uniformed soldier behind the wheel, and then pepper-sprayed him -- all while threatening him with different charges and levels of violence for noncompliance.

“I can think of absolutely no reason under the sun as to why those officers should have exited their vehicles with their firearms trained on my client or any other,” explained lawyer Jonathan Arthur.

Below is one of the body camera videos from the incident. Viewers should be advised there is foul language and content that might be graphic to some audiences:

“Everyone has heard, I believe, in the doctrine of qualified immunity that protects law enforcement if they don't violate clearly established laws," Arthur said. "In this case, we believe that both the United States Supreme Court, the Fourth Circuit, and the Virginia Supreme Court have all said that this type of behavior is completely inappropriate."

He said the plaintiff had calmly deferred to the officers' instructions starting from the moment the police lights started flashing.

"My client didn't do anything wrong," Arthur said.

There were recorded conversations where Officer Crocker tells dispatch that the driver is slowing down to pull over as requested, and Officer Gutierrez said based on training experience, the decision to pull over at a well-lit gas station meant the driver was probably a minority.

According to the documents, which reference police body camera footage, before the officers got to Nazario's car, they would have been able to see that he had a temporary license plate taped to his rear window.

Nazario's lawyer wrote that the plaintiff had calmly deferred to the officers' instructions starting from the moment the police lights started flashing.

Nazario says once he was out of the vehicle, after being sprayed, the officers struck him multiple times, handcuffed him, and interrogated him.

“There was no justification for that type of conduct or at least not under the law,” explained Arthur.

The documents say the officers ended up letting Nazario go after threatening to charge him with obstructing justice, eluding police, and assaulting a law enforcement officer (with the intent of derailing Nazario's military career).

In the lawsuit's introduction, Nazario's lawyer wrote that this was a racially-based violation of justice. Court documents mention Nazario's heritage, which is Latinx and African-American.

"These cameras captured footage of behavior consistent with a disgusting nationwide trend of law enforcement officers, who, believing they can operate with complete impunity, engage in unprofessional, discourteous, racially-biased, dangerous, and sometimes deadly abuses of authority, (including issuing unreasonable comply-or-die commands), ignore the clearly established mandates of the Constitution of these United States and the state and local laws, and usurp the roles of legislator, judge, jury, and executioner; substituting the rule of law for their arbitrary and illegal conduct," the suit reads.

13News Now reached out to Windsor Police Department to see what law enforcement officials had to say about the lawsuit.

Below is one of the body camera videos from the incident. Viewers should be advised there is foul language and content that might be graphic to some audiences: