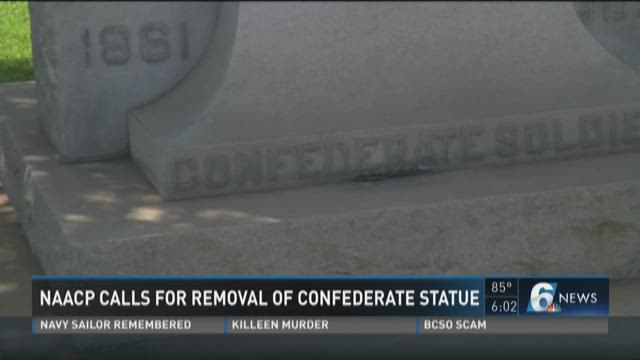 A local chapter of the NAACP is calling for the relocation of a confederate statue that has been in Bell County for more than 100 years.

This comes on the heels of rising violence and racial tensions across the country as confederate statues are being removed.

The statue is right outside of the Bell County courthouse and is dedicated to confederate soldiers – something that is getting mixed reactions from people in the area.

The request to relocate this statue is just the latest in a string of requests all around the country with some history enthusiasts telling us it needs to be stopped.

However, Bennie Walsh, president of NAACP’s Temple chapter disagrees. He met with County Judge Jon Burrows and several commissioners early Tuesday to express his concerns. He suggested moving the statue to a museum or confederate cemetery and said he did not ask for it to be destroyed.

The group met for more than an hour and Walsh said he walked away frustrated.

“We believe from talking got them that their mind is pretty much made up,” Walsh said. “Hopefully, they’ll think about it and consider the whole community we believe that they’re only thinking about one part of the community.”

History Enthusiasts Jane Pitts said the it is an antique and it is art.

“The statue has been standing there for over 100 years, why move it now,” Pitts said.

Channel 6 spoke with the judge after the meeting.

He said everyone in the room had productive dialogue and said he plans to meet with the NAACP again about the issue sometime in the future. A date has not been set.

He also said concerns were raised about the safety of moving the statue since it is so old.

The Bell County Confederate Statue differs from the statues that have been removed in other locations. Many of the other statutes were of specific Confederate Generals or Officers that had no relation to the State of Texas or to the location of the statues.

The Bell County Statue has a direct relation to Bell County. As shown on the statue, it was dedicated to soldiers from Bell County that fought in the Civil War. It has the simple inscription, “To our Confederate Heroes – Erected by Bell County Chapter No. 101 – United Daughters of the Confederacy – October 1916.”

The Confederate Statue is similar to the World War II Statue also located on the Courthouse grounds, in that both have direct historical connection to Bell County. Both commemorate fallen soldiers from Bell County with no commentary on the wars in which the soldiers fought.

Due to the history of Texas, the names of many schools, parks, streets, buildings, statutes, federal installations and other locations may have links to the Civil War, but that is the history of the state. Where there is a direct relation between the named “structure” and its locale, that is simply “History”. The Statue on the grounds of the Historic Bell County Courthouse is simply history.

Members of the Commissioners Court met with a group of citizens today who requested the Statue be removed to another location, such as to the Bell County Museum. They were told the Museum does not have the structural capacity to hold the Statue. Ideas presented by the Court included adding a marker next to the Statue giving the Historical Context of the Statue’s erection. The parties agreed to give thought to other ideas and meet again later to continue the discussion.