"An individual can weed through what they want to see," said Jonathan Riches, "and come up with a conclusion of what happened, why and how." 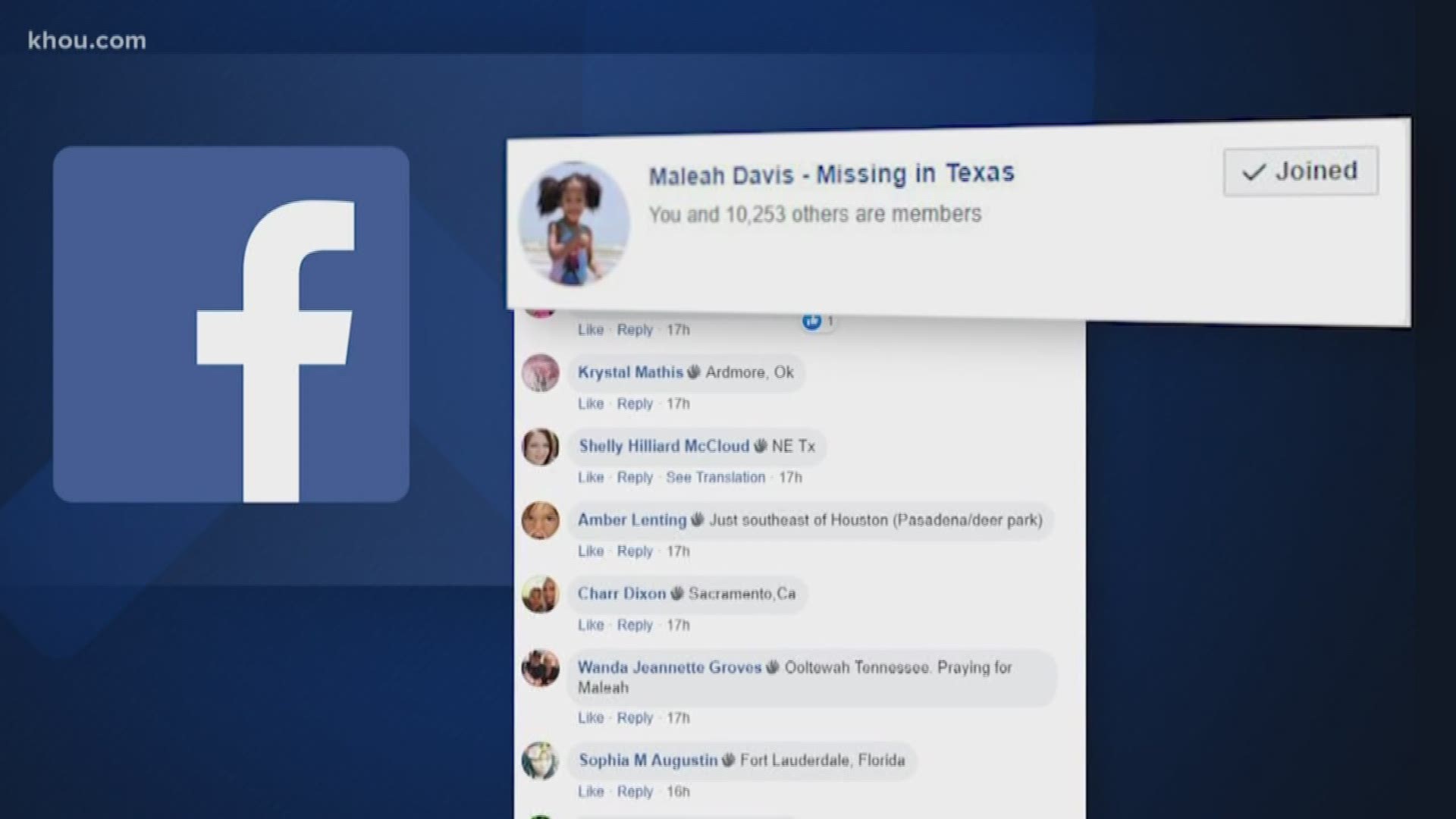 HOUSTON — Air 11 on Tuesday flew over a portion of Rosharon where search teams scoured the area for four-year old Maleah Davis.

Within seconds of KHOU's live video, viewers were sharing the details in Facebook groups dedicated to the disappearance of Maleah Davis.

If you type her name into the Facebook search bar, you'll find dozens of opportunities to discuss the missing person's case.

"We’ve been receiving members joining the group from Australia from the United Kingdom," said Jonathan Riches who created the Maleah Davis-Missing In Texas Facebook group.

Maleah Davis - Missing in Texas
Maleah Davis was reported missing by her stepfather, who says she was kidnapped by three men, sparking an Amber Alert. The 4-year-old girl's stepfather told Houston Police that Maleah was abducted...

Thousands of people with no direct connection to Houston are joining Facebook groups to discuss breaks in the case, questions and details about the search for the little girl.

Riches was in Florida when we spoke to him by Facebook Messenger video chat.

"We created the group last week. There was a few hundred people that joined," said Riches, who's been creating Facebook discussion pages for about three years. "We’re now at about 10,000 members. They mostly flooded in over the weekend, when the searches were going on."

Social media is becoming the place for people to sound off. Riches said it makes sense. People are gathering information online and want to immediately discuss it online.

"I think it’s the future," Riches said. "I think it’s a valuable tool. I think the information is there and available in the group that an individual can scour down and weed through what they want to see."

Riches said he does his best to moderate the group and keep conversations clear of profanity.

But the 24/7 conversation reminds us all just because it's on Facebook doesn't mean it's true. Make sure you're gathering details from a credible source like KHOU11 News or police.

"They’re seeing this case unfold and it touches a lot of people’s hearts. So they’re joining," Riches said.

The disappearance of Maleah Davis is fueling a digital conversation by a community concerned.

What happened to Maleah Davis? The abuse allegations, the evidence and the key players

Did Maleah Davis' mother attend her father's funeral in Massachusetts?

Where is Maleah Davis? Timeline in the disappearance of 4-year-old Houston girl