Rodney Smith Jr. was born in Bermuda but has lived here in the states for over 15 years. You might recognize him as the founder of Raising Men Lawn Care Service. 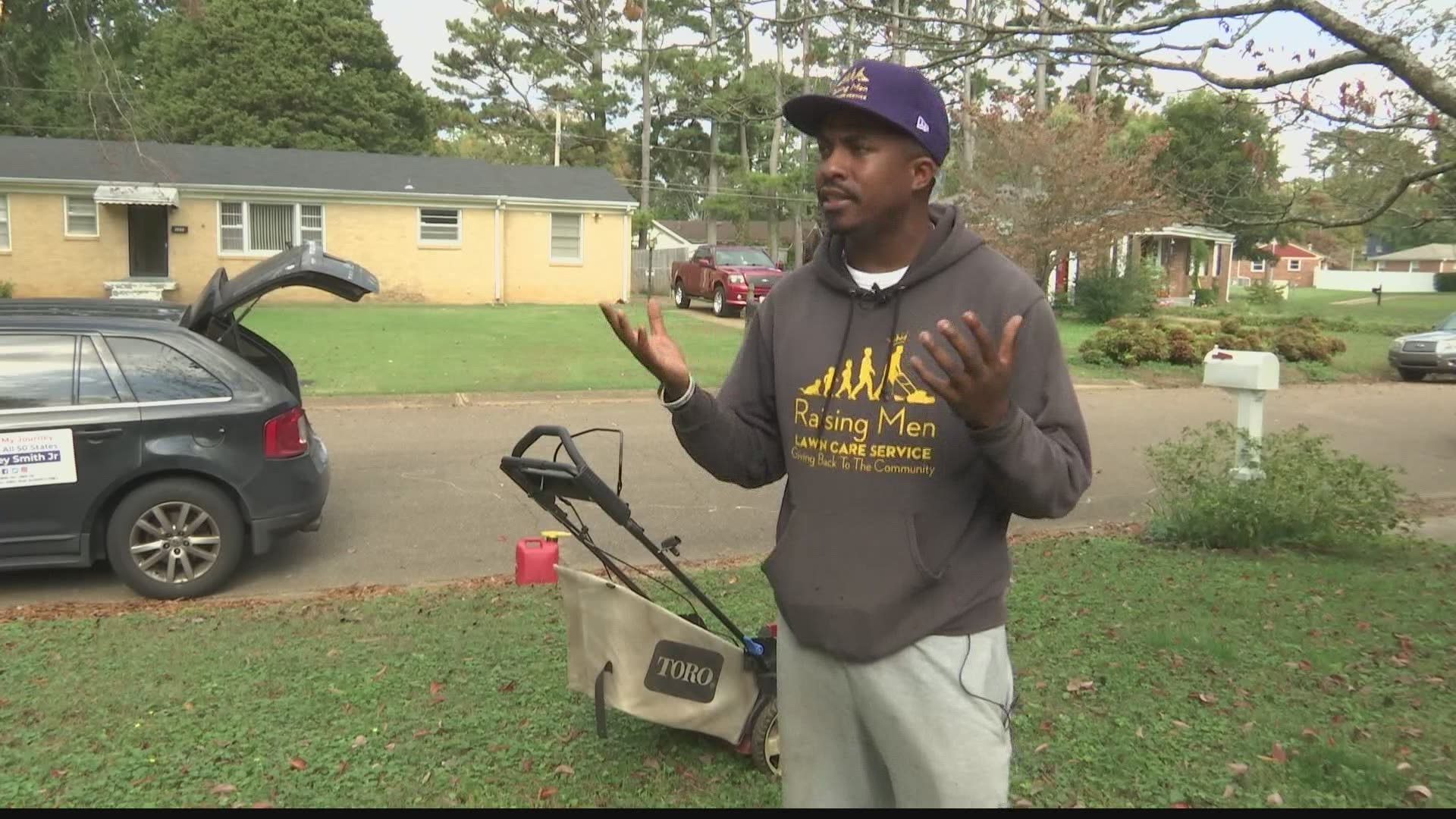 HUNTSVILLE, Ala — One of Huntsville’s local heroes announced Tuesday that he’s in need of help. Rodney Smith Jr., the man who mows lawns for people in need in all 50 states, is at risk of being deported.

Smith was born in Bermuda but has lived here in the states for over 15 years. You might recognize him as the founder of Raising Men Lawn Care Service or remember his smile, which was featured on the Lay's “Smiles” chip bags this year. He’s applied for an E-1 visa in order to stay, but his application was recently denied. But, he’s going to appeal and is asking for your help.

Our reporter met up with Smith Tuesday afternoon as he was mowing a lawn for an elderly woman in Huntsville.

Rodney Smith Jr. says, “When I first got the denial for my visa, for the green card… I was down… It was like a punch to the stomach, it was a blow.”

You might recognize Rodney Smith Jr. as the man behind the mower. He’s made nine trips mowing lawns in all 50 states for people in need. His smile featured on Lays chip bags.; his story, told on national stages.

But now, Rodney is facing a whole other challenge. He’s at risk of being deported.

Rodney Smith Jr. tells our reporter, “I’m in the process of now appealing the decision and asking them to reconsider. Hopefully that goes well. And if it doesn’t go well, I can appeal it one more time and take it to federal court.”

Rodney was born in Bermuda. But, has spent the last 15 years of his life in America. He graduated from high school here and earning a computer science degree at Alabama A&M University.

Little did he know, his life calling would turn out to be reaching those who needed him the most, through lawn care. Rodney founded his organization, Raising Men Lawn Care Service. He says, his vision for the foundation is just getting started, and he has so much more he wants to accomplish. Smith says, “I see the organization being like a big brothers and big sisters organization… Big to that level. And eventually, I want to start a scholarship fund for all the kids because college-- it’s not cheap.”

Last year, the ‘Raising Hope Foundation gave away $17,000 to people in need. Over 1,300 kids in all 50 states and in Bermuda, Japan, Sweden, Germany and more have taken up Rodney’s challenge of mowing 50 lawns in their cities for people in need... and counting.

Rodney’s first application for a green card was recently denied. He applied for the EB-1 visa, which is granted to foreign nationals who demonstrate extraordinary abilities in their field. Rodney applied in the field of social work. But, Smith says his rejection letter reads he has “not provided documentary evidence that my work is an original contribution of major significance to the field”.

Smith tells us, “I’m trying to stay the rest of my life in Huntsville Alabama. This is my home. This is where my life is.”

Smith says he needs help from the thousands of people whose lives he’s touched so far. He’s hoping a letter-writing campaign can be the final push to get his visa approved. He tells our reporter, “I’m just asking people who believe in the organization and love what we do-- if they can just write a letter. A letter of support that I can submit to the USCIS to file for my appeal.”

Rodney is also looking for an immigration lawyer.

If you'd like to send a letter on behalf of Rodney Smith Jr. and the Raising Men Lawn Care Service, send it to P.O. Box 2182 Madison, Alabama 35758.

On November 18, Rodney Smith posted an update to the letters he has received in support.

"We have recently filed for the EB-2 national interest waiver to get my green card. In the picture is all the evidence we have submitted to support our case. Also added are the support letters your wrote. My lawyer & I feel very good about it . Now it’s a waiting game as everything get processed by the USCIS. It will take some time," Smith wrote.

A post from Rodney Smith on Instagram shows an official request sent from Congressman Mo Brooks on behalf of Rodney Smith for his E1-visa application to be reconsidered:

RELATED: Wrapping hundreds of gifts for the homeless

RELATED: Man brings Christmas to homeless in all 50 states