Mayor Steve Adler called the mass shooting “a part of a disturbing rise in gun violence across the country.” 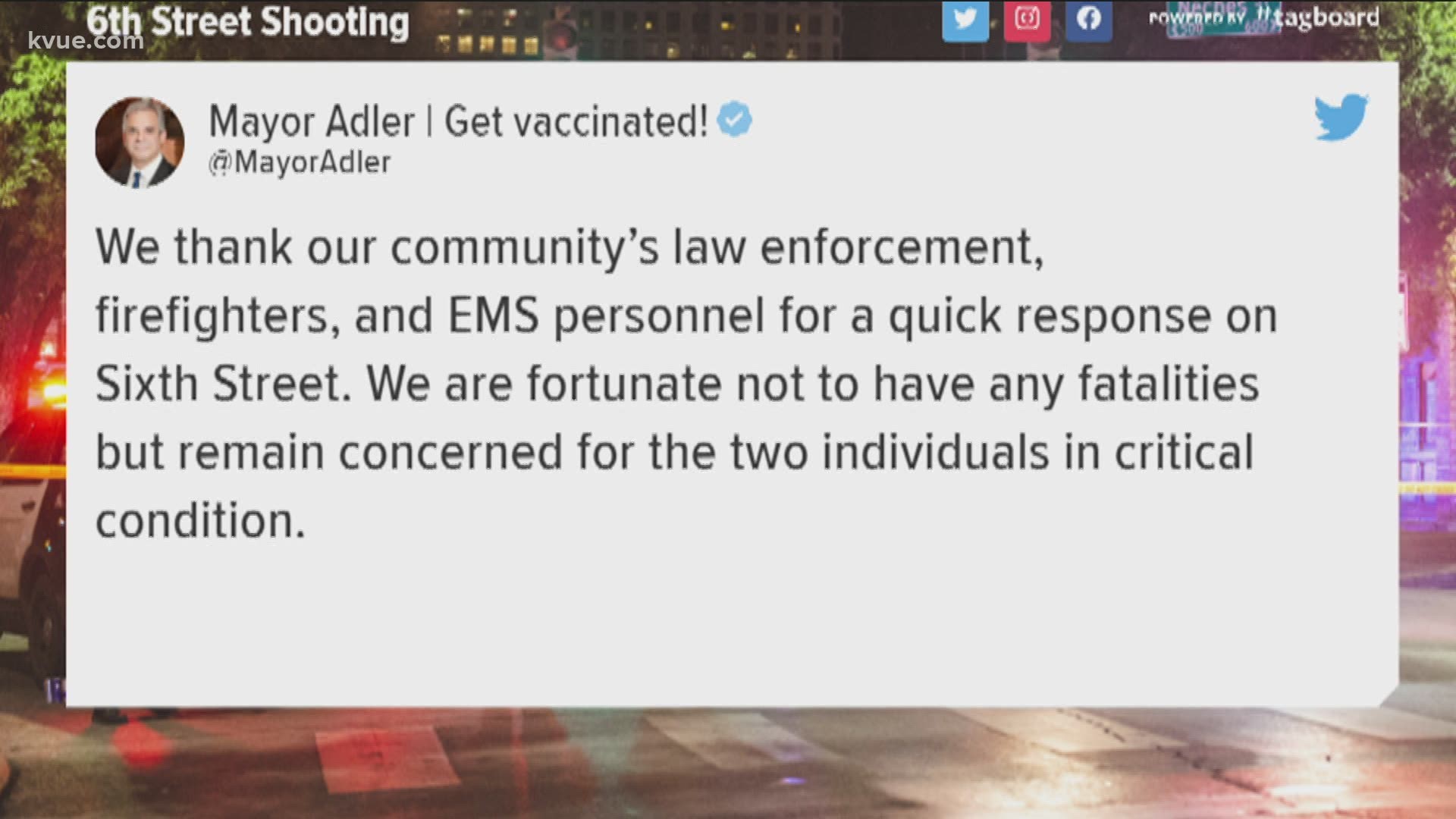 AUSTIN, Texas — Editor's note: An Austin Police Department press release on June 17 changed the number of victims from 14 to 15.

Fifteen people were injured in a mass shooting overnight early Saturday on Sixth Street in Downtown Austin. As the sun came up, leaders started speaking out.

Mayor Steve Adler called the mass shooting “a part of a disturbing rise in gun violence across the country.”

“One thing is clear – greater access to firearms does not equal greater public safety," the mayor said in a statement released Saturday morning.

He released an additional statement on Sunday:

"My thoughts are with the many injured – some critically – who now must heal the physical and mental wounds that come from being shot at random while living their lives. They have a long journey ahead of them as a result of mere moments of senseless violence. Crowds returned to Sixth Street last night because Austin is a safe city. Austinites will go about their plans today because Austin is a safe city. Some will rattle cages about increasing violence locally, but Austin remains one of the safest cities in the state and country."

The White House also gave a statement following the attack.

“This morning, Austin has become just the latest American community to wake up ravaged by an act of senseless gun violence," said White House spokesperson Ike Hajinazarian. "While we pray for the shooting’s victims and their families — and thank first responders for their quick, heroic work — we must not lose sight of what this tragedy again makes clear: it’s long past time for the Senate to pass meaningful gun reform and allow Texans — and all Americans — to enjoy a night out without the fear of another night of gun violence."

Rep. Michael McCaul said, "I am horrified to wake up to the news of a shooting on Sixth Street."

"Senseless violence of any kind is reprehensible and I am saddened to see it happen in Austin," he said. "I am praying the 13 individuals make a full recovery and that law enforcement can quickly identify the suspect."

Austin City Councilmember Ann Kitchen reiterated the mayor’s message saying, "there’s no place for guns on our streets, as we reopen our city.”

RELATED: Austin police zero in on 2 suspects in mass shooting that hurt 14; one in custody

City and state officials also thanked the quick response to the mass shooting by law enforcement at the scene.

"We are grateful for the swift response of law enforcement and stand with them as they continue their investigation," Austin City Councilmember Mackenzie Kelly said Saturday morning.

The councilmember added no community should ever have to experience this.

"Let there be no question: This despicable and cowardly act of gun violence only steals our commitment to making Austin lead the nation in being the safest city in America. No community should ever experience what occurred this morning in Austin," Kelly said in a statement.

"We must do more as a society to prevent this continuing gun violence," Alter said. "This must be a national priority."

JUST IN: Austin City Council member @MK6ATX react to last night’s mass shooting: “No community should ever experience what occurred this morning in Austin.” @KVUE pic.twitter.com/qiKuHEH5H7

Gov. Greg Abbott thank Austin police and first responders for helping save lives. He said the Texas Department of Public Safety is working with APD to ensure those responsible for the shooting are caught.

“The Texas Department of Public Safety is working closely with Austin Police to respond to this shooting and ensure that the perpetrators are captured and punished to the fullest extent of the law,” the governor said in a statement released Saturday morning. “Thank you to APD and first responders for quickly responding to the scene and saving lives. Cecilia and I ask our fellow Texans to join us in prayer for those who were injured.”

.@TxDPS is working with @Austin_Police to respond to the downtown shooting & ensure the perpetrators are captured & punished to the fullest extent of the law.

Thank you to APD & first responders for saving lives.

Join Cecilia & I in prayer for those who were injured. pic.twitter.com/tNvtsCRcwg

A spokesperson for Sen. Ted Cruz released the following statement:

"Sen. Cruz is proud to stand with the brave men and women of law enforcement every day. Incredible bravery in the face of violence by the Austin Police Department saved countless lives. Their use of patrol vehicles to transport victims shows the heart of police — to protect and serve others. Thank you will never be enough to express gratitude to the Austin Police Department and every officer for their work last night and every single day."

Rep. Lloyd Doggett said the attack marks yet another mass shooting when people are "just trying to enjoy a night out."

"Another of our Nation’s repeated mass shootings has now reached Austin," Doggett said. "More calls and texts to check on loved ones. More mothers and fathers visiting their wounded children at the hospital. More terror for young people just trying to enjoy a night out."

Over the weekend, mayors across the country reached out to Austin Mayor Steve Adler to offer Austin their support.

“As mayor of a city still healing from a mass shooting, I stand with Mayor Adler and the residents of Austin as they grieve this senseless act of violence that occurred in their community,” said Dayton Mayor and U.S. Conference of Mayors President Nan Whaley. "As president of the U.S. Conference of Mayors, I pledge to continue our call to Congress for common-sense gun legislation to ensure that no other city has to endure what too many cities have already gone through."

“San Antonio's hearts are with our neighbors in Austin as they recover from this weekend's unconscionable and senseless act of gun violence,” said San Antonio Mayor Ron Nirenberg. “We stand united with our fellow Texans and Americans in calling for commonsense gun legislation to help prevent further suffering."

"Dallas, like many cities, has been challenged by gun violence, and we cannot afford to ignore these issues,” said Dallas Mayor Eric Johnson. “All of our residents — and all Americans — deserve to live in safe communities."

“No city is alone in our struggle to stop the epidemic of gun violence in America,” said Los Angeles Mayor Eric Garcetti. “The people of Austin should know that we’re with them in this moment of shock and sorrow and are determined to keep working with communities across the country to put an end to the suffering.”

“Mayor Adler, thank you for turning this tragedy into action,” said Atlanta Mayor Keisha Lance Bottoms. We just had a security guard shot in the chest at Lennox Square Mall, the most upscale mall in the southeast. He told four men that the Apple Store was closed and one-shot him. The senseless violence and disregard for life are mind-boggling.”

“The people of Seattle stand with Austin and all of our communities facing the epidemic of gun violence,” said Seattle Mayor Jenny A. Durkan. “We must bring the same urgent action that we brought to stopping a deadly pandemic to stopping deadly mass shootings at our schools, grocery stores, neighborhoods, concerts, workplaces, nightclubs, and movie theaters. We need urgent Congressional and national action to reduce this violence by investing in community safety and stopping the flow of guns stoking the violence on our streets.”

“The City of San Diego sends its condolences to those impacted by the mass shooting in Austin,” said San Diego Mayor Todd Gloria. “For far too long, the gun violence epidemic in this country has stolen too many lives and torn apart countless families. We need immediate federal action taken to help end this epidemic.”

“The city of Louisville stands with Austin as American cities strive to stop the unacceptable increase in gun violence that escalated this past year,” said Louisville Mayor Greg Fischer. “Just one month ago, the United States Conference of Mayors hosted a two-day Reimagining Public Safety summit to address this very issue. As cities work to address gun violence, Congress must act with the sensible steps supported by the majority of America.”

“The mass shooting overnight on Sixth Street is a tragedy and the Downtown Austin Alliance offers our support and our prayers for the victims and their families. We are saddened that Austin has joined the far too lengthy list of communities that have experienced mass shootings. Our nation has endured heartbreak time and time again resulting from the acts of deranged individuals intent on killing and harming others. This senseless violence must end. We will continue our work towards ensuring downtown is as safe, clean and welcoming for all, but today, we are thinking of those affected by this shooting. We need to come together, care for each other and be strong together for Austin.”

The Austin Police Association released this statement on Twitter:

"Our patrol officers & detectives stayed extremely busy this morning working one of the worsts acts of violence in Downtown Austin. The violence and crime rates continue to spike. Austin is no longer the safe, fun and weird city it used to be."

And Councilmember Kathie Tovo, who represents District 9 where the shooting occurred, joined us live to discuss. You can watch her interview here:

On Sunday, KVUE's Tony Plohetski confirmed one of the 14 people shot had died. The victim was a man vacationing to Austin from New York, Plohetski confirmed. Police identified the victim Sunday as 25-year-old Douglas John Kantor. KVUE spoke with Kantor's brother about their family's loss. You can see the family's statement here.

Mayor Adler expressed his condolences to Kantor's family and the families of all the victims on Sunday:

This is a tragic outcome. Please keep this person, the other victims and their families in your thoughts.

There were four mass shootings in six hours in the U.S. this weekend. We must do more to prevent gun violence in this country. This should never happen. https://t.co/IczvnVg7xb