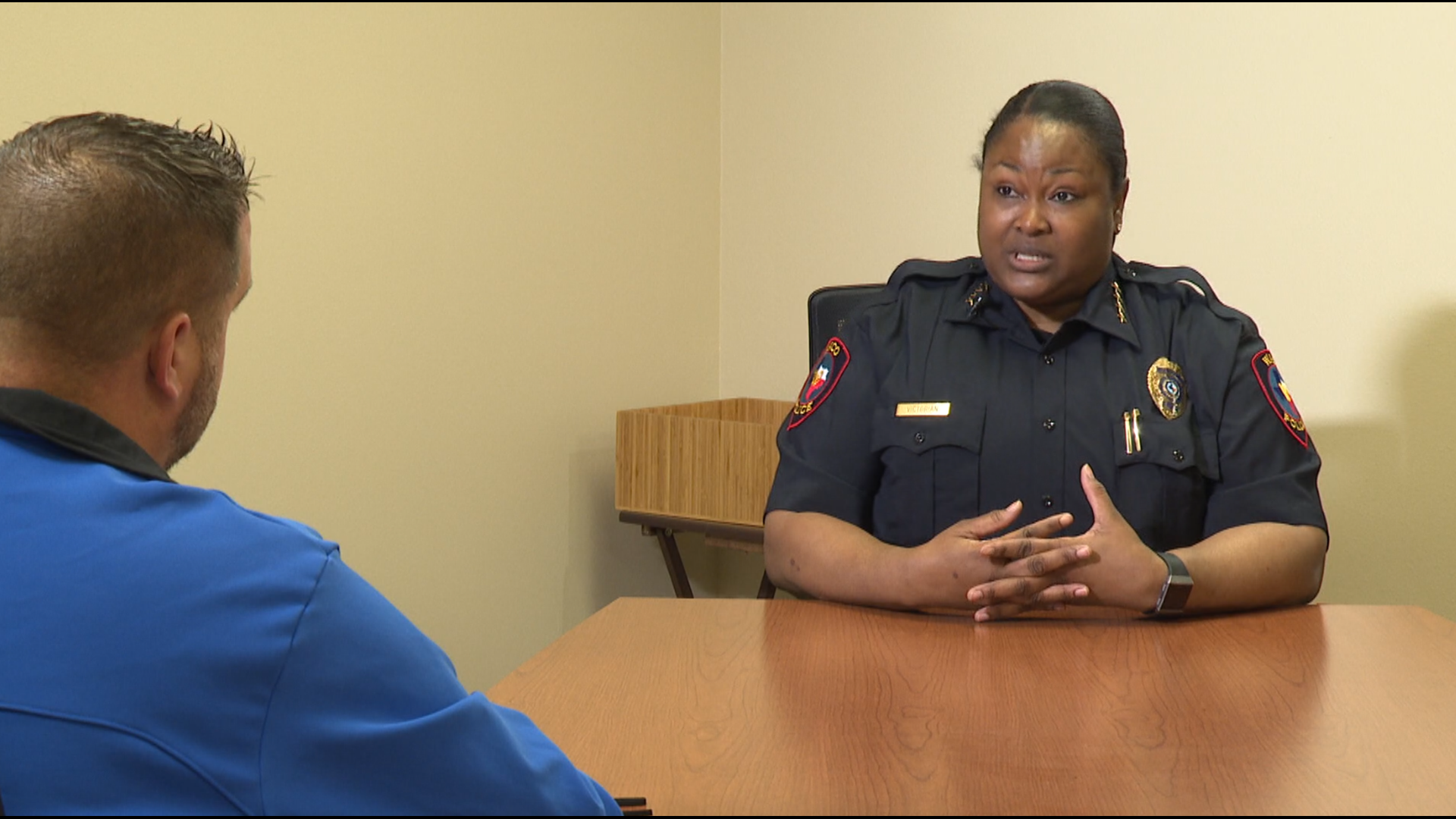 WACO, Texas — Waco Police Chief Sheryl Victorian still lights up a room when she walks in with her infectious smile and demeanor, but she is also serious about her new role in a city she hopes will grow along with her.

"It wasn't my intention to come in and break any barriers and be the first African American or the first female, I just truly believed the characteristics and the profile that was set up by this city and department and what they were looking for, that I met that criteria," Victorian said.

While she said she is happy to be in the city and to lead the department forward, she knows there's a lot of work to be done, given the racial climate around the country. Victorian said building trust between African Americans and the police is a priority during her time.

"When I was in Houston I developed a course called 'Building Trust from Trauma' with our partners with the university," she said. "We talked about the historical traumas of policing and the role police officers played back during the times of slavery and the times of civil rights."

Victorian said in the past, police departments enforced laws that were pressed upon them to enforce. Those actions have created some of the mistrust today.

"We need to have more positive interactions with communities of color and not just respond when they call the police. So, we need to increase that engagement and build that emotional capital," she said when asked how to heal that distrust.

Victorian said she feels she has a responsibility to bridge the divide created by those who came before her.

"I've always felt that way as an African American female police officer," she said. "Early on in my career, I never really thought about the history, I just knew policing. It wasn't until I became a police officer that I really understood that divide between our community and the police."

Victorian said she's been called a traitor for becoming a police officer, but said she feels her position allows her the chance to be the voice many need to hear from. It's a chance for her to show the true meaning of being a public servant and a role model of what policing should look like.

Victorian said that whatever distrust exists now, she hopes the community will give her the chance to get out there and be involved.

The trial of former Minneapolis Police Officer Derek Chauvin is ongoing and it's not far from the mind's eye of Waco's top cop. Victorian said what happened in Minnesota was a step backward for race relations in America.

"I didn't see the actual video until the day after Memorial Day and as I sat there and watched it in astonishment. I'm thinking to myself 'This just didn't really happen in the United States and policing,' and I actually cried," Victorian said. "I felt bad as an African American and as a police officer that this was happening and I felt like we had been set back, with any progress that we had been making, we had been set back."

Chief Victorian said the outcome of the Chauvin trial looms large in many ways for policing in the future.

"I feel like law enforcement is really standing on the heels of what is about to happen and I hope that he brought to justice for what he did," she said.

As much as policing has taken a step back, Victorian said some of the sentiments felt on a national stage aren't all good ones. De-funding the police, she believes, could further damage community relations.

"We would have to re-allocate funds that would potentially further damage the relationship that we have with our community and we really really need that," Victorian said. "As a matter of fact, we need to find ways to increase those opportunities where we have that positive engagement and we can build that trust with the communities that we serve."

6 News asked Chief Victorian what it would mean to her if she got to sit back someday and see someone inspired by her story follow in the footsteps she is laying now. She said she would be honored and delighted if that was the case.

"A woman sent me a message on Facebook and told me that her daughter, a minority, wanted to be the first female Police Chief in the City of Waco, but I beat her to it," she said with a smile. "That little girl sent me a video telling me she wants to work for me, but she's only nine. That would put me out many years."

Victorian said she lost her Dad when she was just nine years old but she's thankful for the work ethic he taught her.

"My father had his own business and I got to watch him work hard, his work ethic. I just loved him to death and I am so grateful that I had the opportunity to have many fond memories of my Dad," she said.

Her Mom, who died just last year, also played a pivotal role in Victorian's upbringing. Her mom always pushed her to be her best.

"We were afraid of my Mom, we loved her and she loved us, but if she was the one and you got in trouble at school and they said we're going to call you Mom, you straightened up," she said. "It wasn't until I became an adult that I realized what she had accomplished and the work that she put into us and instilled in us and how it made us better people."

In her message to the City of Waco and those who call it home, Victorian wants people to know how serious she is about building a relationship stronger than it's been before.

"We need to make sure our communities understand and know that we are guardians just as much as we have to be warriors sometimes," she said, adding she looks forward to engaging with everyone as COVID-19 allows.

Victorian also said she wants the citizens to realize in her first year how serious she is about relational policing and serious about community engagement and emotional capital because there could become a time they may have to make a withdrawal.

"If something happens in the city involving police officers and we mess up or there is an investigation of an appearance that there's been an issue, they would have enough trust in us to know internally we are going to do the right thing and they will give us the opportunity to correct that mistake, whatever it is that we made," Victorian said.