"Never give up. I wanted to give up so many times. I just didn't think I was going to make it through and the vet court team never gave up on me," said Joe Evans, the Fort Hood Veteran Drug Treatment Court graduate. 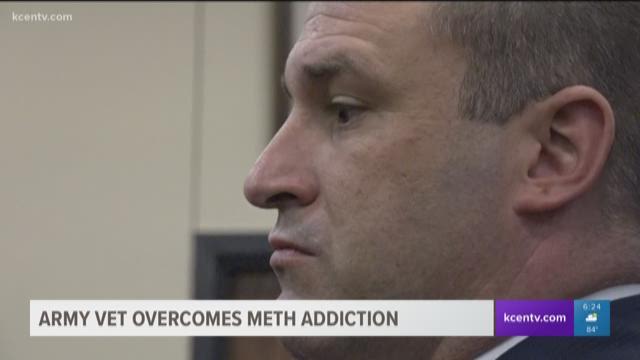 Army vet Joe Evans served a total of 13 years in the military, with 44 months in combat. But the real challenge came on the home front.

"I began to use methamphetamine in order to substitute for Adderall to help me get through PA school, my clinical rotations," Evans explained.

He became addicted and it spiraled from there.

"I was pretty much a broken man. I was lying to everybody in my life, friends, family. I wasn't truthful with anybody and it was in order to conceal my habit or my addiction. I lost my values," he said.

That is when Evans became a member of the Fort Hood Veterans Drug Treatment Court program. The program focuses on a combination of one-on-one mentoring, roundtable discussions and treatment.

"He had been using to methamphetamine and other substances to mask the PTSD that he had been experiencing," U.S. Magistrate Judge Jeff Manske said about Evans. He oversees the program. He said there are nine veterans currently in the program. It could take anywhere from 12 to 18 months to graduate from the treatment. It took Evans 15 months and it did not come easy.

"In fact, he'd even tested positive as he was going through the program and rather than kick him out of the program, we continued to work with him. He went into the VA and served through inpatient treatment programs that they offered. And he has been diligent and tenacious in addressing his recovery," the Judge said.

March 16, 2018 was a special day for Evans. He graduated from the program. His mom and girlfriend, among other supporters, sat in the audience celebrating his accomplishment.

"I'm just so proud of my son. He's done so well and it's been a long trip and we're just glad to finally be here," Pat Evans said.

"Never give up. I wanted to give up so many times. I just didn't think I was going to make it through and the vet court team never gave up on me," said Evans.

The program is a second chance at life beyond the battlefield.

Evans said he hopes to volunteer as a mentor at the Bell County Veterans Treatment Court since he completed the Fort Hood program. He also plans to go back to school and continue his dream to be a Physician's Assistant to help others.

The Fort Hood program was established in 2015. It was the first of its kind on a major military installation. Evans is the sixth to graduate the program.