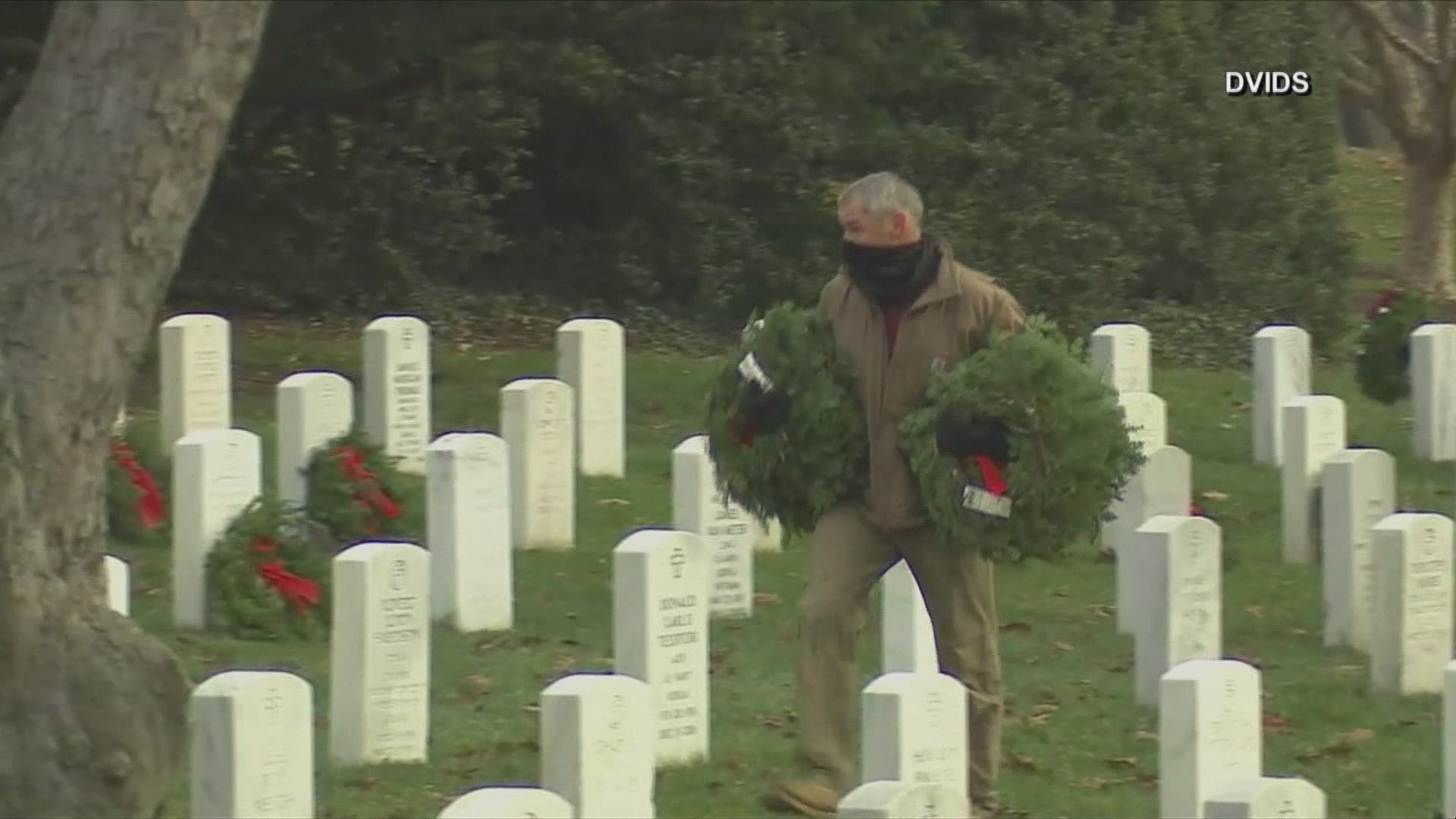 ARLINGTON, Va. — More than 250,000 Maine-made wreaths were placed on graves at Arlington National Cemetery on Saturday.

The distribution represents the highest-profile annual event for Wreaths Across America, the organization that's behind the effort.

The annual mission of Wreaths Across America was nearly sidelined over pandemic concerns last month.

With a modified plan in place, the convoy left Columbia Falls on Tuesday and arrived in Arlington on Saturday.

"As hectic and crazy as it's been, it's very humbling to feel that and feel how people support this mission," Karen Worcester, the co-founder of Wreaths Across America told NEWS CENTER Maine on Tuesday.

The convoy stopped in Portland, and held a ceremony.

One of the people who was featured in the ceremony was Cindy Tatum, a Gold Star mother from Tennessee who lost her son, Daniel, to service on December 24, 2007. Tatum says her family received the knowing knock on their door with the news Christmas Day morning -- which is why she's so moved by all that Wreaths Across America does for families.

"There's just something about the fact that Daniel passed away at Christmas time and the fact that they honor and memorialize, really, our fallen heroes at that time of year," Tatum noted.

Tatum is the national president of the American Gold Star Mothers -- and she was also the 2020 escort grand marshal for WAA. It's something she says she is very excited to do.

"It's all going to be a wonderful, wonderful journey," Tatum smiled.

Safety precautions mean some things this year were different, the mission remained the same.

"We always say that a person dies twice," said Bre Kingsbury from Wreaths Across America. "The first time when they take their last breath...and then the second is when their name is spoken out loud for the very last time."

The wreaths are a solemn promise to always remember.

"As we place the wreath we say that service member's name out loud," said Kingsbury.

In a typical year, tens of thousands of volunteers would lay them in Arlington National Cemetery.

COVID-19 changed that. The cemetery was closed to the general public this week. Only family pass holders were allowed in.

By the end of today nationally, @WreathsAcross and their volunteers + staff will have laid more than 1.7 million graveside wreaths at cemeteries across the country.

More than 2,000 cemeteries participated this year

Brandi Cunliffe, who comes from a military family but is not a pass holder, found that out the hard way when she tried to walk into the cemetery Saturday morning.

"I mean I get it with the coronavirus and everything they have to be extra cautious," she said.

Without the volunteers, staff, family, and the Army Old Guard took a week to place the wreathes.

It was a tall order. There are thousands of graves. But for Kingsbury there was no question it would get done.

The mission is personal.

"I have lost over forty friends, and thirty of whom are buried here behind us," she said.

A dozen were killed in a single incident in 2011, she says, when an RPG shot down an American helicopter in Afghanistan.

To Kingsbury, the wreaths are "a way to make sure that their memory and their legacy stays alive."

Wreaths Across America is a national organization that began when a Maine wreath company ended up with 5,000 extra wreaths that he couldn’t bring to market in 1992. With the help of then-Sen. Olympia Snowe, Morrill Worchester, the company's owner, had them delivered to Arlington.

This year Wreaths Across America says 1.7 million wreaths are being placed on veterans’ graves at 2,557 locations.