Brooks' funeral is being held today at the Ebenezer Baptist Church. 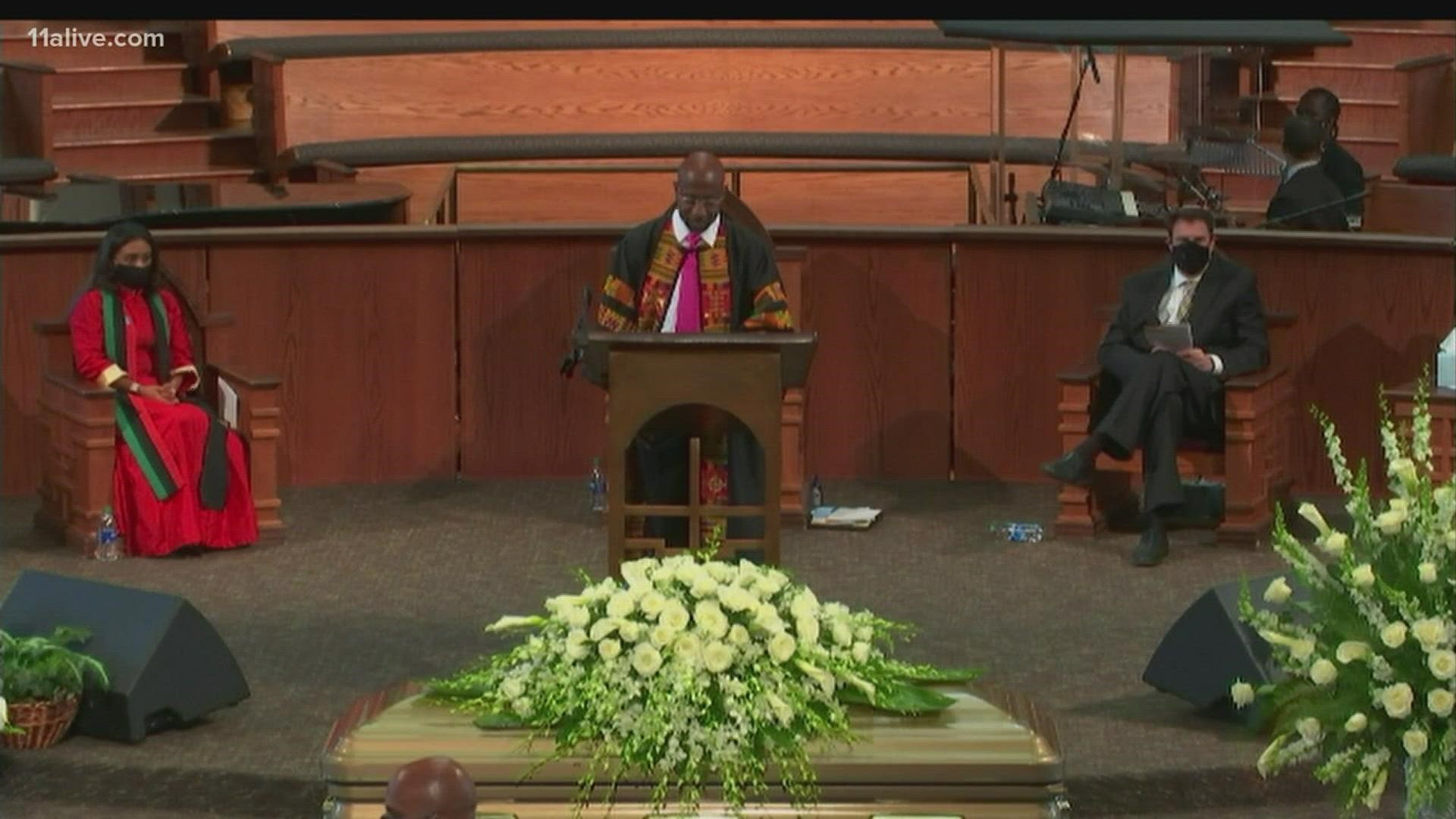 ATLANTA — Rayshard Brooks, the young Black father of four who was shot and killed by an Atlanta officer in a Wendy's parking lot, setting off a wave of anguish in the city, is being laid to rest today.

The service is being held at the historic Ebenezer Baptist Church, where Martin Luther King, Jr. preached.

The church's current pastor, Rev. Raphael Warnock (who is also a Democratic Senate candidate), is delivering the eulogy, entitled, "Let My People Go."

Watch the live service below:

Below, you can read Warnock's full remarks:

Then the Lord said to Moses, “Go to Pharaoh and say to him, ‘Thus says the Lord: Let my people go, so that they may worship me.” - Exodus 8: 1

We have come to this house on this day to sit with this family in their hour of grief. And right now, there is nothing more important than that. With their faces baptized in salty tears mingled with the mists of Jordan, they’ve come to the river to say farewell. And we’ve come to be with them because the ministry of presence is its own power.

Sisters and brothers, it’s good just to be present! To show up for one another! Remember that the next time you’re called upon to console somebody. Try not to talk too much. After all, it’s not so much about the words for no words are adequate for a moment like this. Show up and sit with somebody in their hour of need. The ministry of presence! The prophet Ezekiel said, “Then I came to them of the captivity at Telabib, that dwelt by the Chebar, and I sat where they sat…” (Ezekiel 3:15) And America and Atlanta would be a lot better off if we would learn how to sit where other people sit in order to see what other people see.

We’ve come to sit with them. We’ve come to pray with the whole family but especially for Tomika and the children as they cherish precious memories of a life taken too soon. Tomika was telling me yesterday how Rayshard thought he could dance. She said he couldn’t really dance. He danced like an old man just moved in one place from side to side.

But then I sat the other day with the family and I met 8 year old Blessen. Such a sweet and precious child! On the same day her father was killed, they had been celebrating her 8th birthday. They celebrated her birthday. It turned out to be his dying day. The same day! What do you do with that when you’re 8 years old? These precious children of God will need the village to surround them and support them and embrace them and love on them and reassure them that they are not alone. They have not been abandoned. God is here. The One who is “a father to the fatherless” is here. And WE are here and we will be here for them. Now that’s WHY we are here.

But we would be dishonest if we did not discuss WHAT got us here in the first place. Rayshard Brooks is the latest high profile casualty in the struggle for justice and a battle for the soul of America. This is about him but it is so much bigger than him. A couple weeks ago a reporter asked me, “Pastor, what was like to stand in the pulpit of the Ebenezer Baptist Church, where Martin Luther King, Jr. stood and preach following the tragic and unnecessary killing of George Floyd.” I said, “Well, it’s sort of like it was that Sunday I stood preaching in a hoodie following the killing of Trayvonn Martin. Then Michael Brown and 12 year old Tamir Rice playing on a playground. Oscar Grant, Sandra Bland, Eric Garner, Philando Castile, Laquan McDonald, Freddie Gray, Rekia Boyd, Natasha McKenna, Botham Jean, Breonna Taylor, and Ahmaud Arbery before George Floyd.

And while we were addressing the death of George Floyd, in no time flat, we found ourselves here again. I hear somebody say, “Reverend, they are not the same. George Floyd complied. Rayshard Brooks ran.” Yes, that’s true. And they are both dead. And therein is the problem. Black parents do not really know what to tell their children in order to keep them alive. And that’s a problem! Not just a black problem although it’s happening to black people. That’s an American problem! Dr. King said, “We are tied in a single garment of destiny.”

Make no mistake. I think you should obey the law (unless it is an unjust law) and respect authority. But if your skin is the weapon and your complexion is the crime, what do you do to stay alive? Comply like George Floyd? Or run like Rayshard Brooks? I’m asking for myself and my nephews and my nieces and my children!

This country has become too accustomed and comfortable with black people dying. Black Lives Matter is just a way of saying see our humanity. We’re trying to stay alive and keep our families alive. That’s why we asked you to wear masks today inside the church and outside the church. That’s why we are socially distanced and had the choir to sing virtually rather than stand in the loft. We’re trying to stay alive. Don’t play with this virus. If Black Lives Matter, then we must do all we can to fight for our lives, fight this virus: COVID-19.

But we had to come together because there’s another virus in the land. And, it’s killing people. There’s COVID-19 and then there’s COVID-1619. They are both deadly. And in this land, we’ve been trying to beat back this virus since 1619 when about 20 slaves or so arrived in Jamestown, Virginia. Mass incarceration is the latest mutation of an old virus called racism.

And that’s not just a social issue or a political issue. That’s a moral issue. That’s a spiritual problem. “Then the Lord said to Moses, “Go to Pharaoh and say to him, ‘Thus says the Lord: Let my people go, so that they may worship me.” (Exodus 8:1) Liberate them so that they may live lives of human flourishing, promise and possibility to the glory of God. They don’t belong to you! They don’t belong to private prison corporations. Thus says the Lord, “Let my people go!”

That’s why I’m grateful for this great coalition of conscience, pouring out into our streets in nonviolent protest. Let’s keep marching! Matter of fact, I’m here to announce another march. Please don’t miss it. It’s happening November 3, 2020 at a voting booth near you! March to the voting booth!

God is speaking to us. “Let my people go!” The United States of America is 5% of the world’s population but we warehouse 25% of the world’s prisoners. No other nation even comes close. Now that is a dubious form of American exceptionalism none of us ought to accept. We have a greater percentage of our people and we have more of our people in jails and prisons than any nation in the world by far. The land of the free is the incarceration capital of the world. 2.2 million people. And twice as many, 4.5 million on probation or parole.

We demand police reform. We need police reform. God knows we do. But this is bigger than the police. Police brutality is as predictable as it is tragic. We will always have police brutality as long as we remain a nation committed to mass incarceration. Systemic racism is the framework. Mass incarceration is the beast. The escalation of encounters between police and citizens is a means through which the beast is fed. Some die a physical death on the streets. Others die a social death in custody. And even when they are released, they experience all the forms of discrimination against which Dr. King fought. Social Death!

We mourn Rayshard but there’s more than one way to die. You can die a social death. An economic death. A spiritual death. If all the doors of re-entry into citizenship and a productive life are closed because you have to check the box that says you’ve been arrested whenever you receive an employment application, that can feel like you’re dying. You’re trapped. You can’t breathe.

That’s why a few years ago now, Ebenezer Baptist Church organized the very first one stop expungement (record restriction) event in Fulton County. We later partnered with our friends at the Temple and working with county officials, we’ve been expunging criminal arrest records. One of the proudest moments in my ministry was the day I walked into this sanctuary for our first record restriction event, 4 years ago, and I looked across a sea of faces and I knew that everybody in church that day had a record. That’s true everyday….I was in the barbershop….”You cleared my record…” 2 Generations saved!

Everybody’s got a record. And none of us wants to be forever judged by our worse day.

And so, when I heard Rayshard’s story, I understood. He was on probation in a state that, despite its reforms, is ground zero for keeping people on probation for extended periods of time. 1 in 18 Georgians on probation or parole. Somebody said, “Well why did he run? Didn’t he know…” Well, sometimes you have to sit where other folk sit in order to feel what they feel.

You don’t have to listen to my words because he left it in his own words in a video he made this year. Google it and listen to it. It is heartbreaking. He talks about how hard it is to come back, to recover when you return. He was trying. He had been digging his way back. And he knew that night that he could very well lose his liberty. Afraid of losing his liberty, he lost his life, running from a system that too often makes slaves out of people. This is much bigger than the police. This is about a whole system that cries out for renewal and reform.

So America, the city on the hill - and Atlanta, the city too busy to hate - rather than trying to destroy one another, maybe God wants us to use Rayshard’s tragic story and this dark chapter to move us toward turning the page. After all, God who has a record of using people with a record to do extraordinary work. Have you checked the record? Don’t dismiss people with a record. You’ll miss most of the holy story:

Moses had a record – He slew an Egyptian. He killed a man. God had more in store for him.

Joseph had a record – Joseph was thrown in prison but he held on to his dreams.

Three Hebrew Boys were sentenced to death for an act of civil disobedience.

Daniel was charged, convicted and thrown in the Lion’s Den

John was imprisoned on a Island called Patmos, the Rikers Island of that day. There he saw a new heaven and a new earth.

Jesus had a record – Not surprising, given his start. Born in a barrio called Bethlehem. Smuggled as an undocumented immigrant, a dreamer, into Egypt. Raised in a ghetto called Nazareth. But he came saying, “The Spirit of the Lord is upon me…”

They brought him up on trumped on charges. Convicted him without the benefit of a due process.

Marched him up Golgotha’s hill.

Executed him on a Roman cross.

Buried him in a borrowed tomb.

But His movement was so contagious, he got off the cross and got in our hearts.

“If my people who are called by my name would humble themselves and pray, seek my face, turn from their wicked ways, then I will hear from heaven, I will forgive their sins and heal their land.” (2 Chronicles 7:14 KJV).