Supreme Court Justice Ruth Bader Ginsburg asked to see the document during a visit to the National Archives. The 19th Amendment gave women the right to vote. 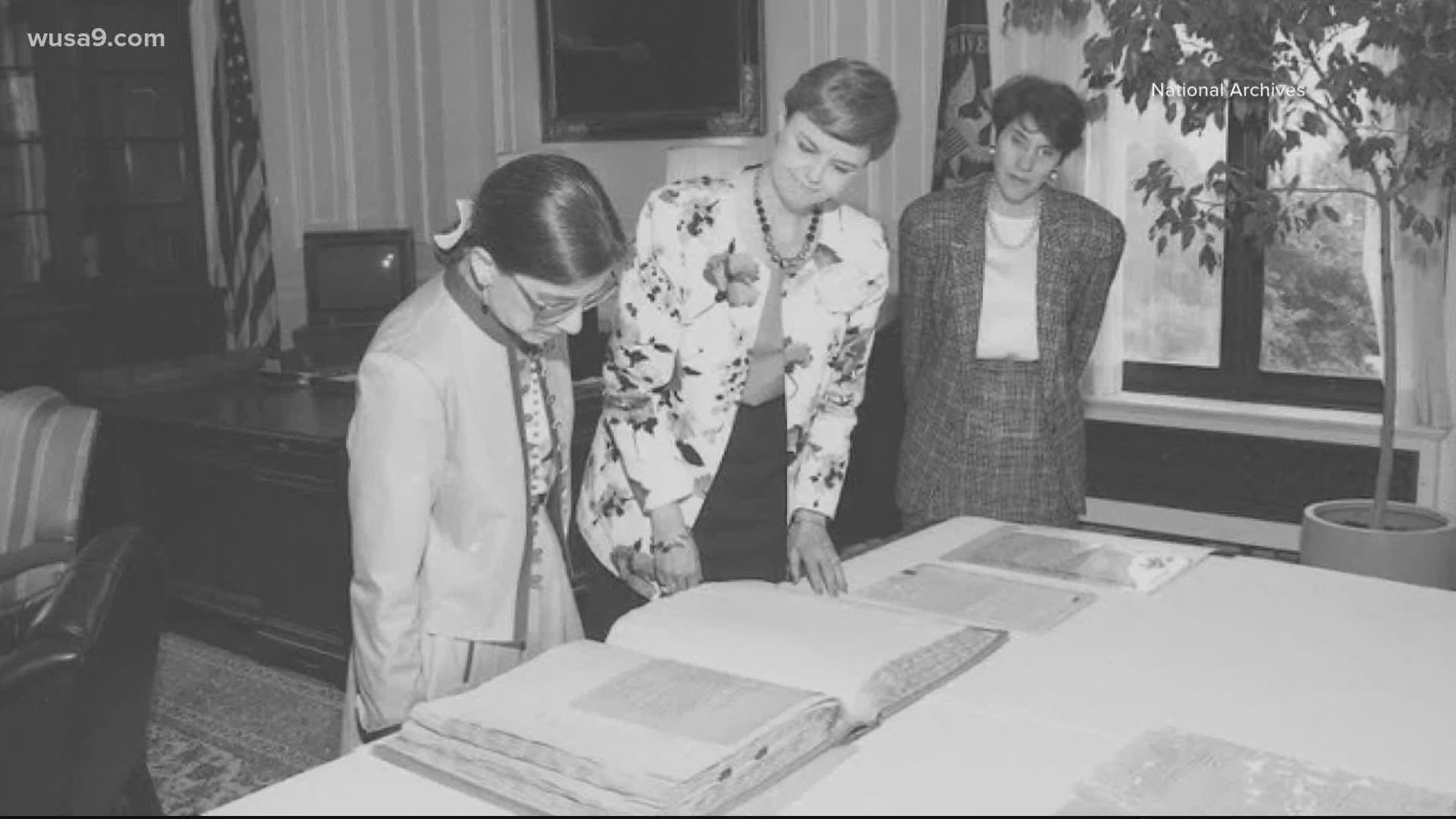 WASHINGTON — United States Supreme Court Justice Ruth Bader Ginsburg paid a special visit to the National Archives, in Washington, close to three decades ago. It was an occasion that further highlighted her commitment to fighting for equal rights for all.

In August 1993, Ginsburg's friend, Maeva Marcus, arranged for the associate justice to visit the National Archives. Ginsburg had been sworn into her new role on American's highest court only 16 days prior to the event.

According to former US Acting Archivist Trudy Huskamp Peterson, Ginsburg made a request when she entered the building. She said Ginsburg said the first document she wanted to see was the 19th Amendment.

The 19th Amendment legally gave American women the right to vote. In February, Ginsburg spoke to the importance of the amendment at a speaking engagement at the Georgetown University Law Center.

"It was the first step toward equal citizenship stature for women," Ginsburg recalled.

Peterson described Ginsburg as "focused" during her visit to the National Archives.

"She really wanted to look at the document," she said. "It wasn't as if this was a social visit in any sense. It was social, of course. It was friendly. But she really wished to look at it. She turned pages. She wanted to see what the actual document looked like to reaffirm its vision in her mind as a core document of American history."

Ginsburg previously said her mother took part in suffragette parades, at the age of 15, to fight for the right to vote.

When Ruth Bader Ginsburg visited the National Archives in 1993, there was one document that Acting Archivist Trudy Peterson wanted her to see: the #19thAmendment to the #Constitution.

The importance of the 19th Amendment, to Ginsburg, was not lost on her friends.

Marcus said Ginsburg was always fighting against inequality, especially at the beginning of her career.

"She personally encountered various obstacles against women in employment," Marcus said. "When she was pregnant, she had to hide it so she wouldn't be fired. There were personal things like that."

But Marcus added Ginsburg was committed to equality for all.

"You know, more than women's rights, she wanted everybody to be treated equally," she said. "That men and women should have the same, and that's what she did."

According to the National Archives, Ginsburg argued six gender discrimination cases before the Supreme Court prior to her being sworn in as one of its justices. The archives credited her arguments in the court as being instrumental in creating precedents that advanced gender equality in America.

RELATED: Ruth Bader Ginsburg to lie in repose at Supreme Court, lie in state at US Capitol

Peterson was appointed as the first woman to serve as the Acting Archivist of the United States in March 1993.

She said Ginsburg's visit to the National Archives helped reaffirm the importance of documents in American history.

"To have someone as powerful as a Supreme Court justice, and a woman who has been so powerful in rights for American women, come and want to see a document, it becomes a validation of all the things that an archive stands for," Peterson said. "To preserve the documents that give our rights and benefits a home and a place where they are safe and secure for the future."