The incident happened after a suspect began firing a rifle at officers responding to a family violence call. 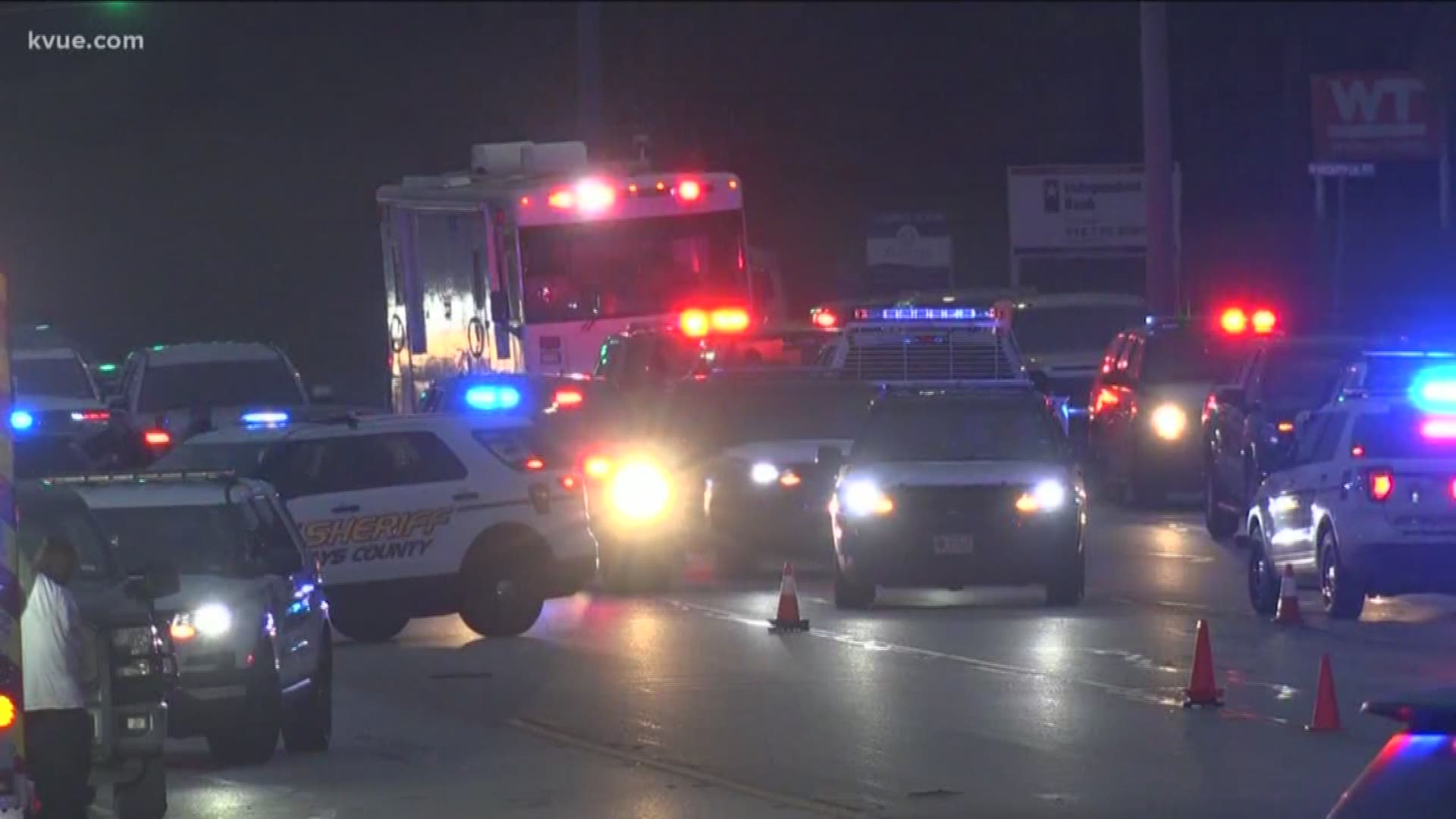 SAN MARCOS, Texas — A police officer is dead and two officers are injured after an active shooter situation in San Marcos on Saturday night. The alleged shooter is now dead.

The incident happened after a suspect began firing a rifle at officers responding to a family violence call at Twin Lake Villas Apartments at 2917 Hunter Road, near the intersection of McCarty Lane, at around 6 p.m. Saturday.

Klett said the initial call was that DeLaCruz had hit his wife, that there were other possibly endangered people inside the apartment and that alcohol was involved. Officers knew one victim was outside and that there were probably more inside, so they entered the residence. As they entered, the suspect ambushed them and began shooting immediately.

Just after 7 p.m. Saturday, the City of San Marcos said Hunter Road was closed from Reimer Avenue to McCarty Road for an in-progress investigation.

According to Hays County Sheriff Gary Cutler, there was an active shooter situation and the combined Hays County and San Marcos SWAT team responded. Cutler said this is an SMDPD investigation but, at the press conference Sunday, Klett clarified that the Texas Rangers are taking the lead on the investigation.

Other law enforcement agencies that assisted in the response include the Kyle, Buda and New Braunfels police departments, the Texas State University Police Department and Texas Highway Patrol.

Kyle Police Chief Jeff Barnett said that is just what officers do for one another.

"When something like this happens, it hits all of us," he said.

He also echoed the dangers these men and women in uniform face every day.

Around 7:45 p.m. Saturday, San Marcos police said the area had been secured. There is no additional threat to the public.

The City of San Macros said the two surviving officers, Stewart and Mueller, were taken to Ascension Seton Hays in Kyle, where they underwent surgery.

“We are heartbroken to make this announcement,” said Interim Police Chief Bob Klett. “We ask for your support for our fellow officers and their families as we try to cope with yet another tragic event in our San Marcos police family.”

Former SMPD Chief Chase Stapp also spoke out on Twitter, saying, "I truly am without words to describe the anger, sadness and sense of loss the San Marcos Police Department has had to endure over the past two and a half years. My prayers are with Chief Klett and the SMPD team."

Retired SMPD Police Chief, Howard Williams, who now teaches at Texas State University, echoed their statements, adding that the community will rally together, and never forget the name Justin Putnam.

'He was such a family man' | Family of fallen San Marcos officer remembers him as protector, family man, jokester

"These men and women that put on these uniforms every day are the bravest of the brave," he said.

Klett said Sunday morning that Officer Putnam had been with the SMPD for five-and-a-half years and was a Texas State graduate. He attended Westwood High School in Austin. He leaves behind a fiancé and a family with a public safety background.

Gov. Greg Abbott called the shooting "a somber reminder of the service and sacrifice our brave men and women in law enforcement make every day to keep us safe."

"I am grateful for the swift action of the San Marcos Police Department in containing the threat and minimizing the loss of life," Abbott said in a statement.

State Rep. Erin Zwiener, who represents Hays and Blanco counties, also released a statement Saturday night, saying in part, "My heart is heavy with the report that three San Marcos officers were shot in the line of duty tonight and that one has lost their life. I extend my deep condolences to the family of the deceased officer, a dedicated public servant whose heroism proved critical to the safety of the San Marcos community."

Tributes were flowing in from fellow law enforcement after the incident on Saturday.

Austin Chief of Police Brian Manley said, "Heartbroken over the murder of a San Marcos Police officer earlier this evening."

"Thinking about my brothers and sisters in blue in San Marcos," APD Assistant Police Chief Jennifer Stephenson wrote on Twitter.

Houston Police Department Chief and former APD Chief Art Acevedo said, "The hearts, thoughts and prayers of all of us at @houstonpolice go out to our fallen and wounded colleagues and their families."

The shooting is the second line-of-duty death for the San Marcos Police Department after Officer Kenneth Copeland was shot and killed serving a warrant on Dec. 4, 2017.

According to Officer Down Memorial Page, a website that tracks officer deaths, this is the second Texas law enforcement officer death from a shooting in 2020. Including this San Marcos officer's death, 48 officers have died in the line of duty this year, 15 of them from gunfire.

Klett said SMPD will provide more information about this incident as it becomes available.

The City said Putnam's vehicle will be parked at City Hall near the police and firefight statues along Hopkins Street. Members of the public may leave memorials around the vehicle for his family and SMPD.