Server gets $2,000 tip, but restaurant says it can't process a tip that big

A local server received a $2,000 tip as an early Christmas gift but she can’t get a single cent. Her employer said they can’t process a tip bigger than $500. 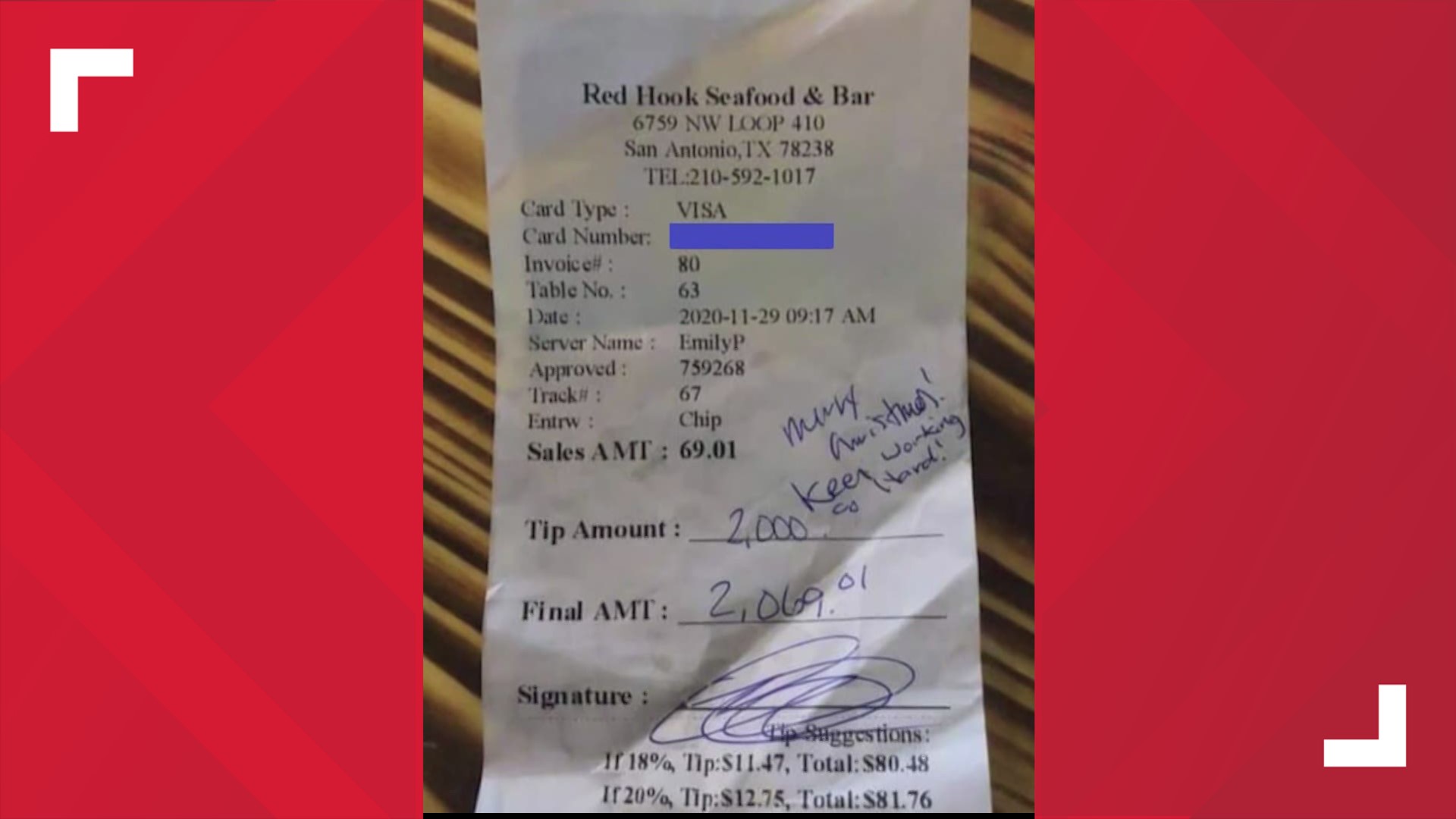 UPDATE: The restaurant has paid the server the full amount of the tip described in this story.

SAN ANTONIO -- A local server received a $2,000 tip as an early Christmas gift, but she can’t get a single cent. Her employer said they can’t process a tip bigger than $500.

Emily Bauer says she’s been a server for about two weeks at Red Hook Seafood and Bar located on Northwest Loop 410. She said Sunday was a busy day at the restaurant and she was working a lot of tables. A couple was sitting in her section, and the man was empathetic towards her, she said.

“I kept apologizing. 'I’m sorry. I’m being slow.' He was just like, 'I understand.' He also mentioned he owned restaurants. So he knew how hard it was to be a server,” Bauer recalled. “He actually didn’t want the rest of his order. He was like, 'just cancel everything. Cancel everything and give me the ticket.' So, I said okay. I gave him the ticket.”

Bauer said the couple left and she grabbed the ticket. She said she didn’t notice the tip amount until she went behind the drink station at the restaurant. The man had given her $2,000 and wrote a note that said: "Merry Christmas! Keep working hard!"

But Bauer hasn’t been able to get a single cent from her tip. She said the system at the restaurant wouldn’t allow her to process the money. She said her manager told her the limit of a tip is $500. The other servers suggested the restaurant give Bauer four payments of $500 but she said they refused.

“I don’t think it’s our responsibility as a server to say, 'oh, you can’t tip me that much, I’m sorry. Oh no, there’s a limit, I’m sorry.' If that’s the case, there should be signs posted on the restaurants or the receipt to say there’s a limit of $500,” Bauer said. “Everybody I’ve talked to has been like, 'I’ve never heard of that before.' If it’s left to you and signed by that person, then you should be able to get it.”

Bauer said her manager told her the man who left the tip called the restaurant and was disappointed that she couldn’t take it. Bauer said she wants to contact the man, but her manager didn't take down the man's information. She has already posted the ticket on her Facebook and hopes the generous tipper will hear her words of gratitude.

“Even though I can’t receive it, thank you. Thank you for having such a big heart. This world is filled with messed up people. It’s like, how did he know I needed that?” Bauer said.

KENS 5 reached out to the general manager Tuesday to get the restaurant’s side but did not hear back prior to airing the story Tuesday evening.

After the story aired, the restaurant posted a statement in the comment section for this article on the KENS 5 Facebook page. The comment claims there was more to the story and the article did not have the full information.

Bauer responded to the above comment from the restaurant, saying she was prompted to reach out to the media by the restaurant's management in an attempt to contact the generous customer. You can see her full response below:

Bauer also stated in the further comments to other Facebook users that the KENS 5 article was accurate.

KENS 5 is seeking further comment from the restaurant's management Wednesday.

Other stories from KENS 5: