The McLennan County Sheriff's Department is investigating the Sunday murders of a mother and her baby daughter near Tradinghouse Creek Reservoir. 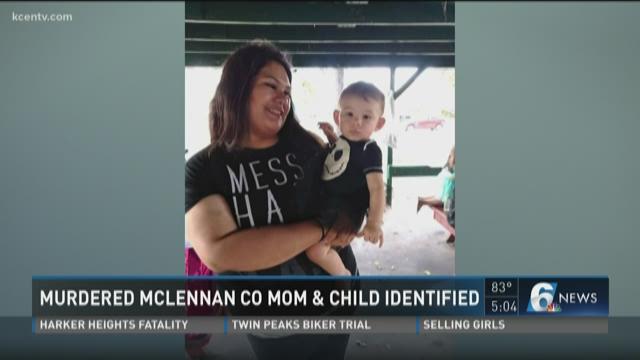 WACO, Texas - The McLennan County Sheriff's Department is investigating the Sunday murders of a mother and her baby daughter near Tradinghouse Creek Reservoir.

A group of people found Valarie Martinez, 24, and her toddler Azariah, 1, dead around noon Sunday in the park area and called 911, according to McLennan County Sheriff Parnell McNamara, who explained both had been shot. The baby was still strapped into her car seat at the time they were discovered, McNamara said -- calling the scene "very disturbing" and "very heartbreaking." He declined to say whether the shooter had attempted to hide the bodies or left them in plain sight.

"Very seldom do you see a one-year-old child that's been gunned down. What kind of animal does something like that?" McNamara said.

Investigators had received several tips, as of Monday, and they had eliminated multiple people as potential suspects -- leading them to look at another pool of possibilities, although McNamra would not comment further on specific individuals they were investigating. As of Monday afternoon, no arrests had been made. However, he said detectives were "putting pieces together."

"We've had leads coming in," McNamara explained. "And, we're pursuing every single lead we get."

The sheriff said his deputies were working around-the-clock to solve the murders, growing emotional as he described how "brutal" the killings were.

"We will solve it," McNamara said firmly. "This person will be arrested and brought to justice."

If you know anything that could help the sheriff's department find the killer, please call Crime Stoppers at 254-753-4357 or submit an anonymous web tip by clicking here. You can also call the McLennan County Sheriff's Office directly at 254-757-5000.