The 'Oracle of Oil,' T. Boone Pickens died at his home Wednesday with his family by his side, spokesman Jay Rosser said. 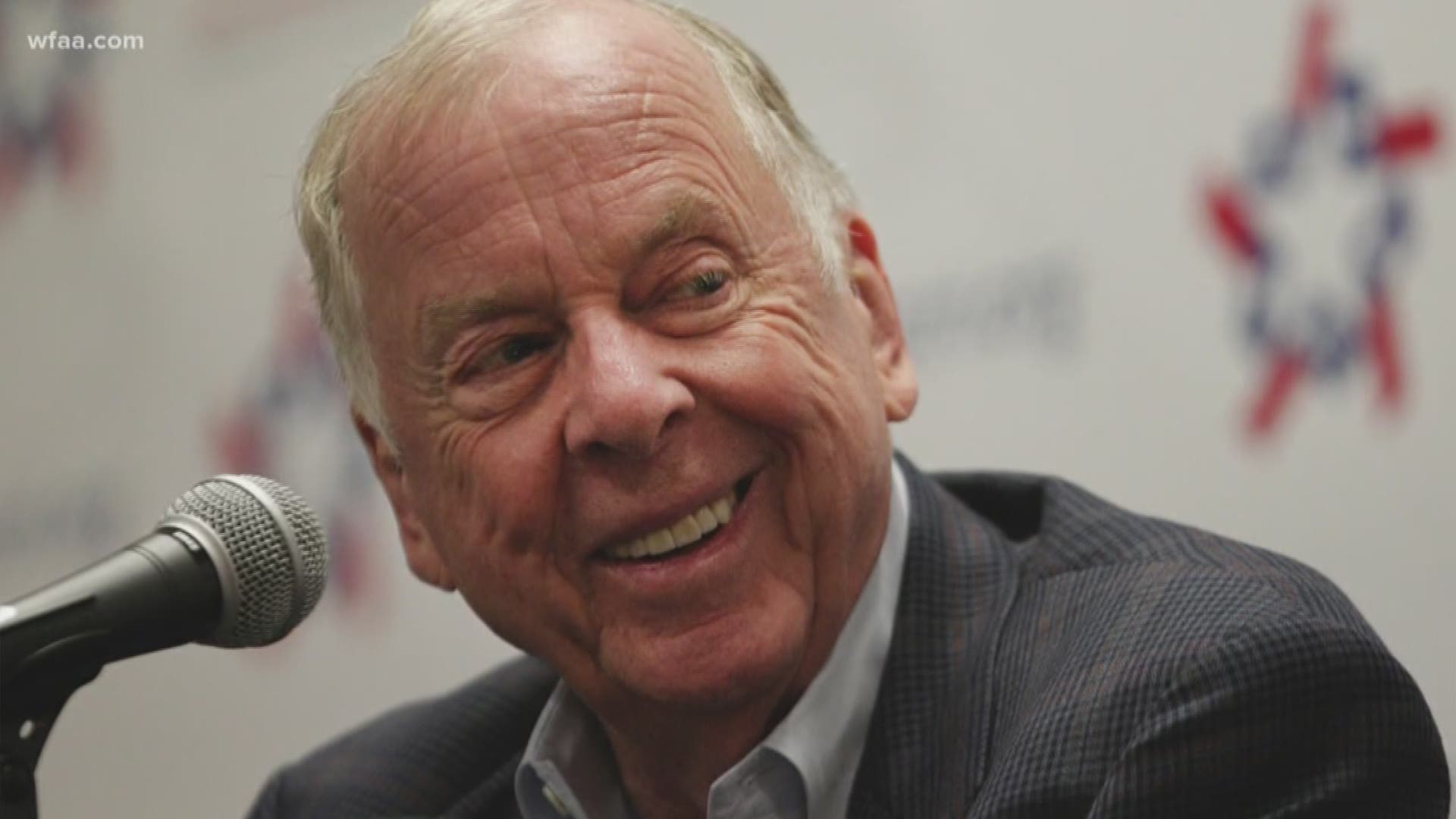 After a couple of strokes and a few falls, Pickens’ health deteriorated and he had been receiving hospice care at home since last Thursday, according to spokesman Jay Rosser.

He died at home Wednesday afternoon with his family by his side, Rosser said.

Pickens was among a select few high-profile business giants to call Dallas home. Some of his late contemporaries include Ross Perot and Herb Kelleher.

RELATED: 'A legendary Texas entrepreneur': Reactions to the death of T. Boone Pickens

Pickens was named after his dad. The "T" stands for Thomas. But his friends called him Boone.

Even at 91, he still went to work every day at his office near Preston Center. Boone often said he would retire when he dies.

He most recently was the chairman and CEO of BP [Boone Pickens] Capital in Dallas, a hedge fund focused on energy investments. Boone was also the largest shareholder in a company called Clean Energy, which provides natural gas for fleet vehicles such as semi-trucks, taxis, and law enforcement, among others.

With a degree in Geology from Oklahoma State University, Pickens started out working for Phillips Petroleum in 1954.

RELATED: 'A Texas legend': Reactions to the death of H. Ross Perot

It all started for him in 1957, when he founded a company that later became Mesa Petroleum using a $2,500 loan. He led Mesa for 30 years developing it into the largest independent producer of oil and natural gas.

In the 1980s, Pickens was known as a "corporate raider" who advocated for shareholder rights. He was a risk-taker and gifted executive who appeared on dozens of magazine covers but said he felt most productive after 65.

In 1997, Pickens founded BP Capital Management, a hedge fund making investments in the energy sector. In less than a decade, he had earned more than a billion dollars from it.

In 2012, after Drake tweeted about his success in music by writing: “The first million is the hardest,” Pickens jokingly shot back: “The first billion is a helluva lot harder‪.”

But Boone lost big a decade ago when he bet on renewable energy.

In 2008, Boone announced plans to build the world’s largest wind farm in the Texas Panhandle in an effort to wean the U.S. off of foreign oil. But when natural gas prices fell, wind energy was no longer profitable or economically feasible.

Still, Boone reportedly had a net worth of a half-billion dollars.

For years, he generously contributed to causes and foundations in North Texas and across the country.

“I’ve always loved making money and since my first paper route, I’ve never been broke,” Pickens famously once said, according to Rosser. “I like making money. I like giving money away. Giving money is not as fun as making it but it’s a close second.”

Gallery: Photos of T. Boone Pickens over the years

Boone was among the most generous collegiate philanthropists of all time, Rosser said, contributing more than $500 million to his alma mater, Oklahoma State University. The funds were almost evenly divided between academics and athletics and OSU’s football stadium bears his name.

“I firmly believe one of the reasons I was put on this Earth was to make money and be generous with it,” Pickens was quoted as saying. “And that’s what I’ve continually tried to do.”

“For all his accomplishments, I respect Boone most for his vision, generosity, and can-do attitude,” said Ted Turner, media magnate and environmentalist in a legacy booklet created by Pickens’ staff.

Pickens was active in Republican politics, as well.

“He received one important lesson from his schoolteacher aunt, Ethel Reed, who confessed in her classroom to being the only registered Republican in Hughes County, Okla. where Pickens was born,” according to the legacy booklet.

“That’s not because the Republicans are good, but because they are not as bad as Democrats,” Reed said.

For years, Pickens gave tens of millions of dollars to local, state, and national Republican campaigns.

Pickens even contributed $10 million to help fund the Air Force One Pavilion at the Ronald Reagan Presidential Library in Simi Valley, Calif.

Boone, whose name is on the YMCA in downtown Dallas, worked out well into his 80s. Rosser said that Boone used to joke that his trainer had a three-word job description: “Keep Boone alive.”

A couple years ago, Boone wrote on LinkedIn that he suffered several strokes and had a “Texas-sized fall” that sent him to the hospital.

His essay went on to admit he was in the fourth quarter of life.

“Now, don’t for a minute think I’m being morbid. Truth is, when you’re in the oil business like I’ve been all my life, you drill your fair share of dry holes, but you never lose your optimism. There’s a story I tell about the geologist who fell off a 10-story building. When he blew past the fifth floor he thought to himself, ‘So far so good,’” Boone quipped.

In, Boone and the Boys, a 2015 WFAA documentary, Boone amusingly recalled his high school basketball days in a conversation with his long-time friend and legendary Dallas Cowboys quarterback Roger Staubach.

“That coach told me one time in basketball you can’t run fast enough to scatter leaves,” Boone joked.

Funeral services for T. Boone Pickens will be held next Thursday, September 19 at 2 p.m. inside Highland Park Methodist Church. He’ll be buried at the Karsten Creek Golf Course — near Oklahoma State University (his alma mater). 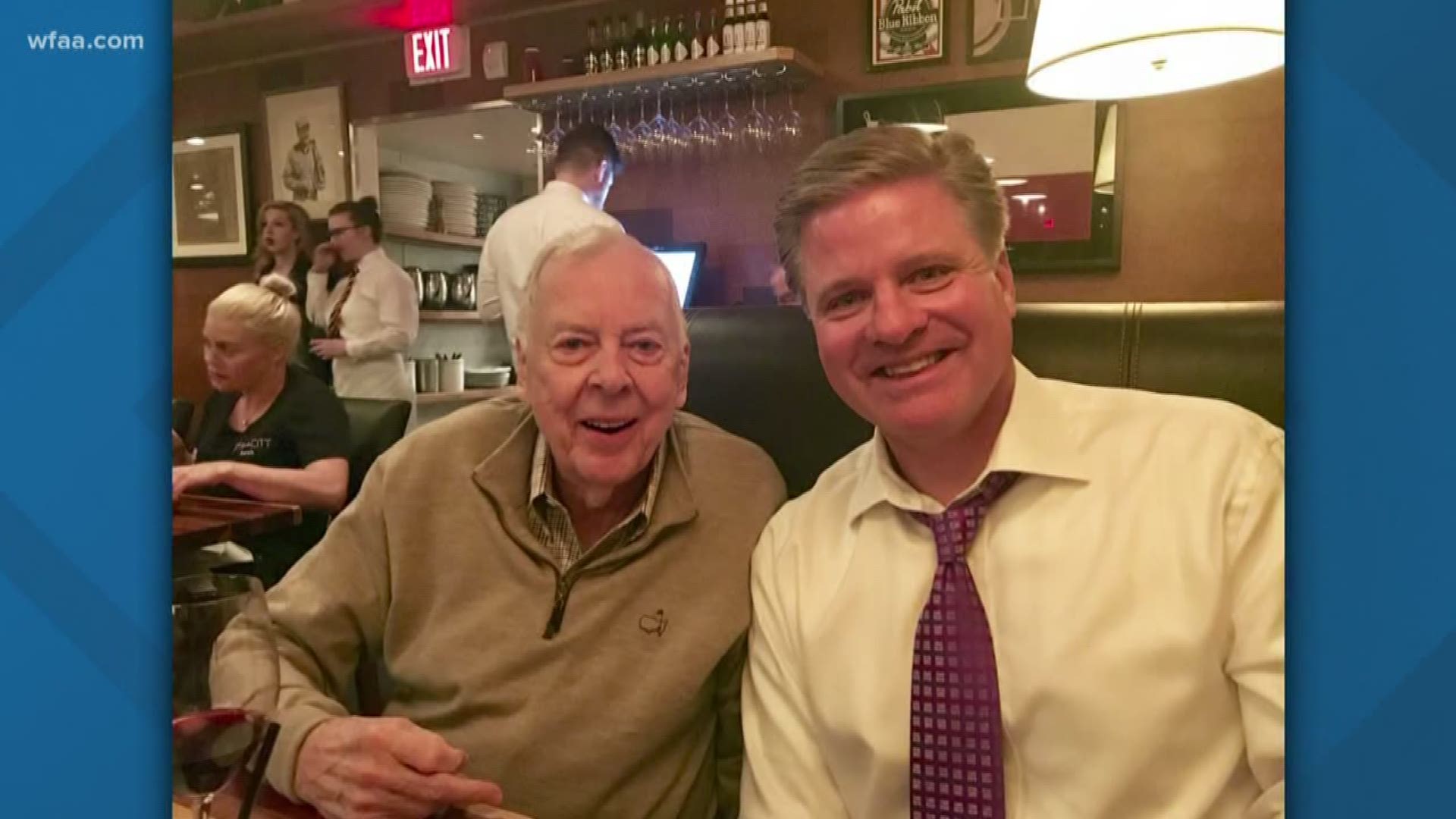 RELATED: T. Boone Pickens: 'My health is in decline'