A 16-year-old boy was hit and killed by a mixed-freight train around 4:20 p.m. Wednesday near Copperas Cove High School. 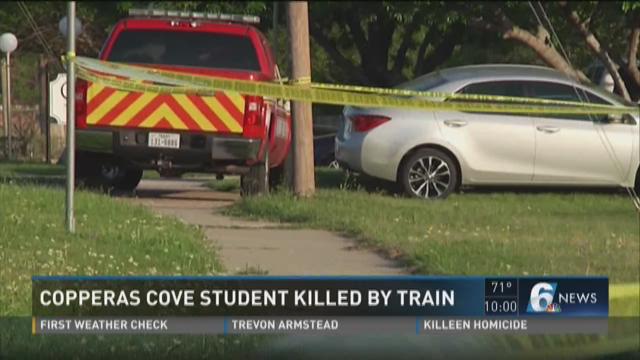 A 16-year-old boy was hit and killed by a mixed-freight train around 4:20 p.m. Wednesday near Copperas Cove High School, in the area of Avenue B, a fire department source and the train company confirmed to Channel 6 News.

A spokesperson for Burlington Northern Santa Fe, Joe Faust, said the teen was not struck at a railroad crossing, but was hit near a crossing -- between two crossings. The locomotive had a camera onboard, so investigators will review the video to determine exactly what happened.

The teenager was declared dead at the scene, the train company said, and that it's devastating.

"It's always tragic when a young person a high school aged person loses their life in this manner. We're going to review the video and determine exactly what happened and what they young man was doing on the track at this time" says Faust.

Burlington Northern Santa Fe said the train was heading from Sweetwater, Texas to Temple when it struck the teen.

A Copperas Cove High Schooler says it's shocking that something so tragic has happened.

"I find it very tragic because some of my friends walk this way to and from school" says Eric Morris, Copperas Cove High student.

He went on to say that the railroad tracks are a popular crossing place for everyone that attends his school and that he hopes students will now be more alert.

"That could've been me or one of my friends walking along just not paying attention and out of nowhere you just get hit by a train and gone" says Morris.

"It is with a heavy heart that we express condolences to the family of the Copperas Cove High School student who passed away this evening. Our thoughts and prayers are with them during this difficult time. Additional counselors will be available at CCHS tomorrow and through the remainder of the week to meet with students and staff and will remain available as long as needed. Please keep this family in your prayers."