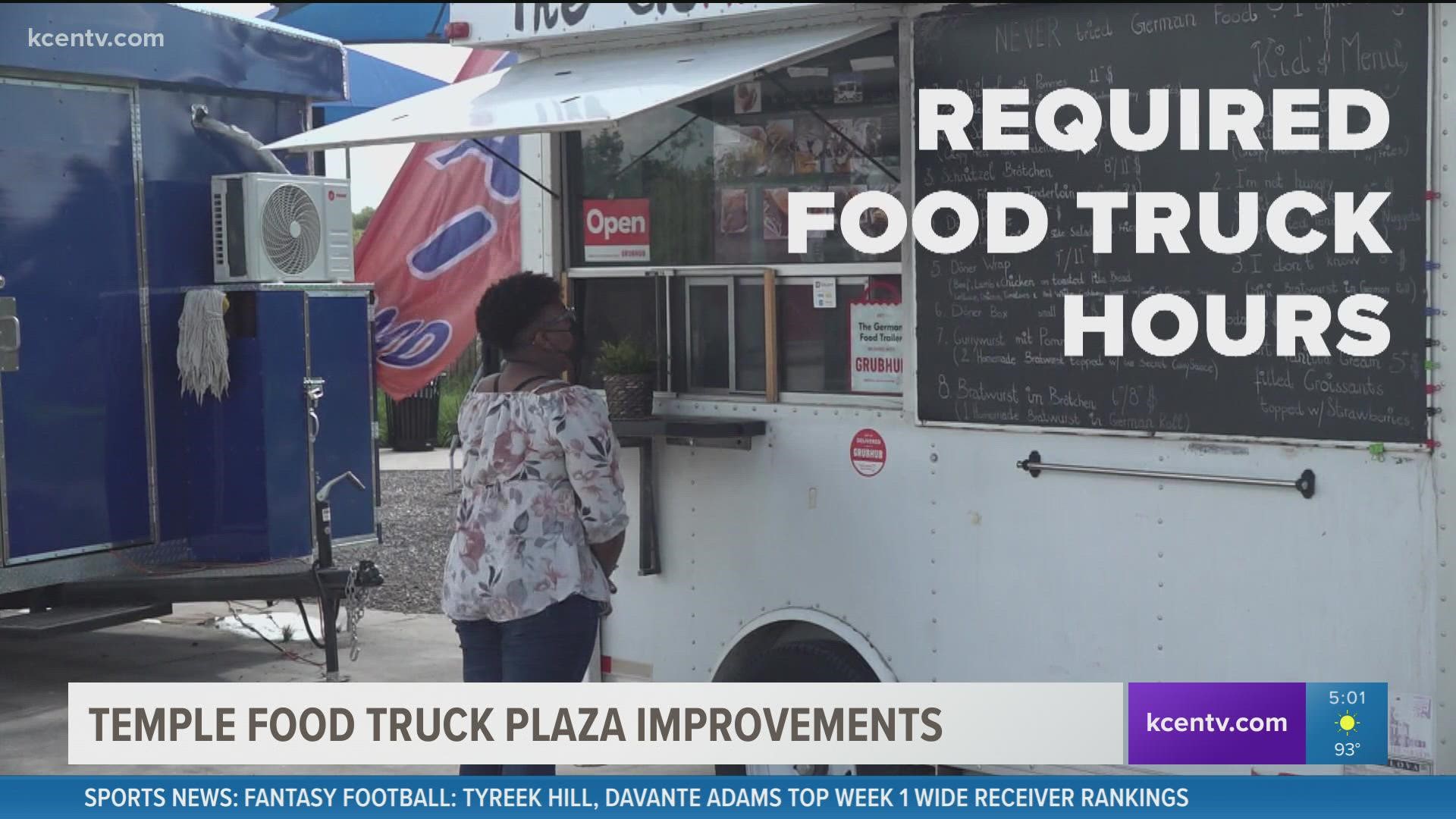 TEMPLE, Texas — Temple's Food Truck Plaza, called "The Yard," opened late last year. On some days no trucks are open. Other days, just a few. Food truck owners that rent at The Yard have told 6 News they don't get enough business staying in one place. The City of Temple told 6 News the trucks are difficult to market because they have constantly changing schedules.

"For marketing it, if everyone is going and coming with different schedules, we don't have a regular schedule to advertise 'hey come down to the food truck plaza, we have five trucks open," Parks and Recreation Assistant Director Mike Hemker told 6 News.

At the same time, truck owner agree they make more money spending just a few hours at a special event then during a whole day at the food truck plaza, so they don't always provide a regular schedule.

Is there a way to solve this chicken-and-egg problem? After speaking with multiple truck owners, 6 News ran three suggestions by the City on Tuesday.

Multiple truck owners have told 6 News they would like to see signs specifically directing people to the food truck plaza in the downtown area. The City of Temple does display flagpole banners for "The Yard" around the immediate area of the food truck plaza but truck owners would like to see signs in other parts of downtown directing people to the site. It's also worth mentioning that the sign designs feature "The Yard" in large text and "Food Truck Park" in small text, which owners worry is not effective.

"It says 'The Yard' and then in very small letters it says 'food truck park'. A lot of people don't want to go to 'the Yard'. They want to know what's in the yard," William Mulholland said.

Mulholland, who owns Bill's Smoke Wagon, told 6 News he brought up the issue of signage in a meeting with the City Tuesday Morning. 6 News contacted the City of Temple about that solution Tuesday.

In an emailed response, the city stated, "We are exploring the possibility of additional signage in the future."

The area near Temple's Food Truck Plaza has very few parking spaces for customers to take advantage of. According to Mulholland, many of the spaces are actually taken by people who work in the area because they can no longer park in front of their businesses.

"Parking got worse a couple months ago when the city put Main Street as 2 hour parking," Mulholland said. "Anyone who worked on Main Street had to move their vehicles further away from that."

At the same time, there is a city parking lot just two blocks over. 6 News inquired if the city had a plan for parking at the plaza and asked if part of that city parking could be used for the plaza. The city provided the following response:

"One of the advantages of this location is that it is an easy walk for people who work in the downtown area. There are several large employers within a couple blocks of the plaza, and it makes for a quick and easy lunch trip. For weekends, special events or people who don’t work in the downtown area, there are several public parking lots within the vicinity, including at City Hall, on Avenue A (next to the Police Department) and on the other side of the bridge along the Santa Fe Plaza. The Yard was designed with walkability in mind."

The City of Temple rents out spaces at the food truck park on a weekly or monthly basis. At the same time, Hemker told 6 News trucks don't keep regular schedules and are hard to promote because of it. When 6 News went to the plaza Tuesday, only one truck was open. Another food truck owner that told 6 News they were normally available at lunch from was nowhere to be found.

6 News asked the City of Temple if they could require truck owners, as part of their lease agreement, to be available during a lunch or dinner window at least four times a week so the plaza would have an attraction the city could market. The city's response indicated they were not going to take that approach at this time.

"There are no plans to require food trucks to be present at the plaza for any certain hours. The flexibility of food trucks allows operators to move freely to best suit the needs of their individual businesses. Operators are able to share their hours of operation through their own platforms as they see fit.

However, when they’re not at a special event, operators who rent space at The Yard are encouraged to serve meals during regular rush hours: 11 a.m.-1 p.m. and 5-7 p.m. This is not a requirement, but is highly encouraged in order to gain regularity from those who serve at the site."