Attorney General Ken Paxton said this week that abortions should not be performed unless the mother's life is in danger. 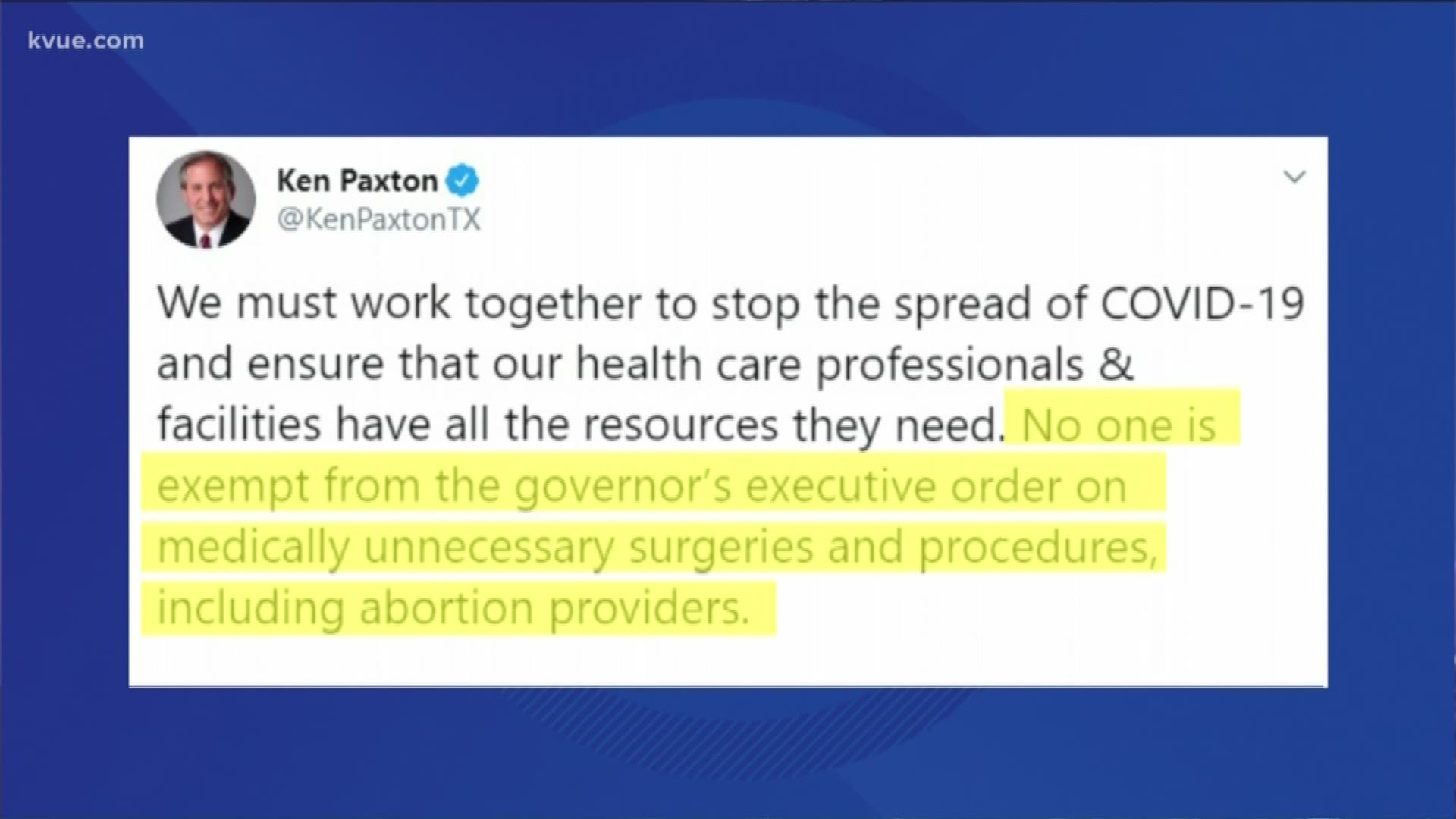 SARGENT, Texas — (THE TEXAS TRIBUNE) Texas abortion providers announced a lawsuit against top state officials, challenging an executive order earlier this week that included abortion in a ban of all procedures that are deemed to not be medically necessary.

In a press conference Wednesday, national and state abortion rights groups said they are seeking a temporary restraining order, with hopes of a more permanent injunction to follow. They are representing various abortion providers in the state, including Austin Women’s Health Center and Southwestern Women’s Surgery Center.

The ban, which Attorney General Ken Paxton later clarified applies to abortion clinics as well, was enacted to ensure the state maintains health care capacity as it prepares for an influx of COVID-19 patients. But abortion clinics and activists in the state pushed back almost immediately, with Planned Parenthood President Alexis McGill Johnson calling it an “exploitation” of the current crisis.

No abortions in Texas unless the mother's life is in danger, Texas attorney general says as coronavirus spreads

Texas orders postponement of medical procedures that are not 'immediately necessary'

“I find it extremely distressing … that we are trying to respond to a purely political fight that [Gov. Greg Abbott] started. Patients who need abortions are on a time-sensitive deadline,” Massingill said.

Providers have already had to turn away patients, Massingill added, and delays of even a few weeks could render some abortions impossible if the patients' pregnancies extend past legal deadlines.

Whole Women’s Health operates two Texas abortion clinics, in Fort Worth and in Austin. Amy Hagstrom Miller, the group's president and CEO, said clinical staff had to cancel more than 150 appointments after the governor’s order, something she said creates “a health crisis on top of a health crisis.”

“We cannot sit idly by while the state is forcing Texans to be pregnant against their will,” Miller said.

Miller said emergency funds will be used for patients with canceled appointments in an attempt to get them care out of state.

Paxton responded to the lawsuit on Twitter, criticizing abortion providers for their opposition.

"It is unconscionable that abortion providers are fighting against the health of Texans and withholding desperately needed supplies and personal protective equipment in favor of a procedure that they refer to as a 'choice,'" Paxton wrote in his tweet.

Marsha Jones, the executive director of The Afiya Center, a Dallas-based reproductive rights group, said Wednesday that banning abortions, even temporarily, poses a higher risk to some vulnerable communities, like low-income women or women of color.

“We literally cannot allow people to use a global health crisis to force women into making choices that are not good for them," Jones said.

Abortion rights groups in Ohio signaled a similar pushback this week after Ohio Attorney General Dave Yost announced a similar ban. It appears that Texas and Ohio are the only states so far to have enacted health care bans that are directed, in part, toward abortion clinics.

This story originally appeared on The Texas Tribune. To read this article in its original format, go here.

List: Here's what's open during the order to stay home