We all eventually become the keepers of our parents' memories. But, when it comes to her dad Burnie Sutter, a daughter learned she wasn't keeping them alone. 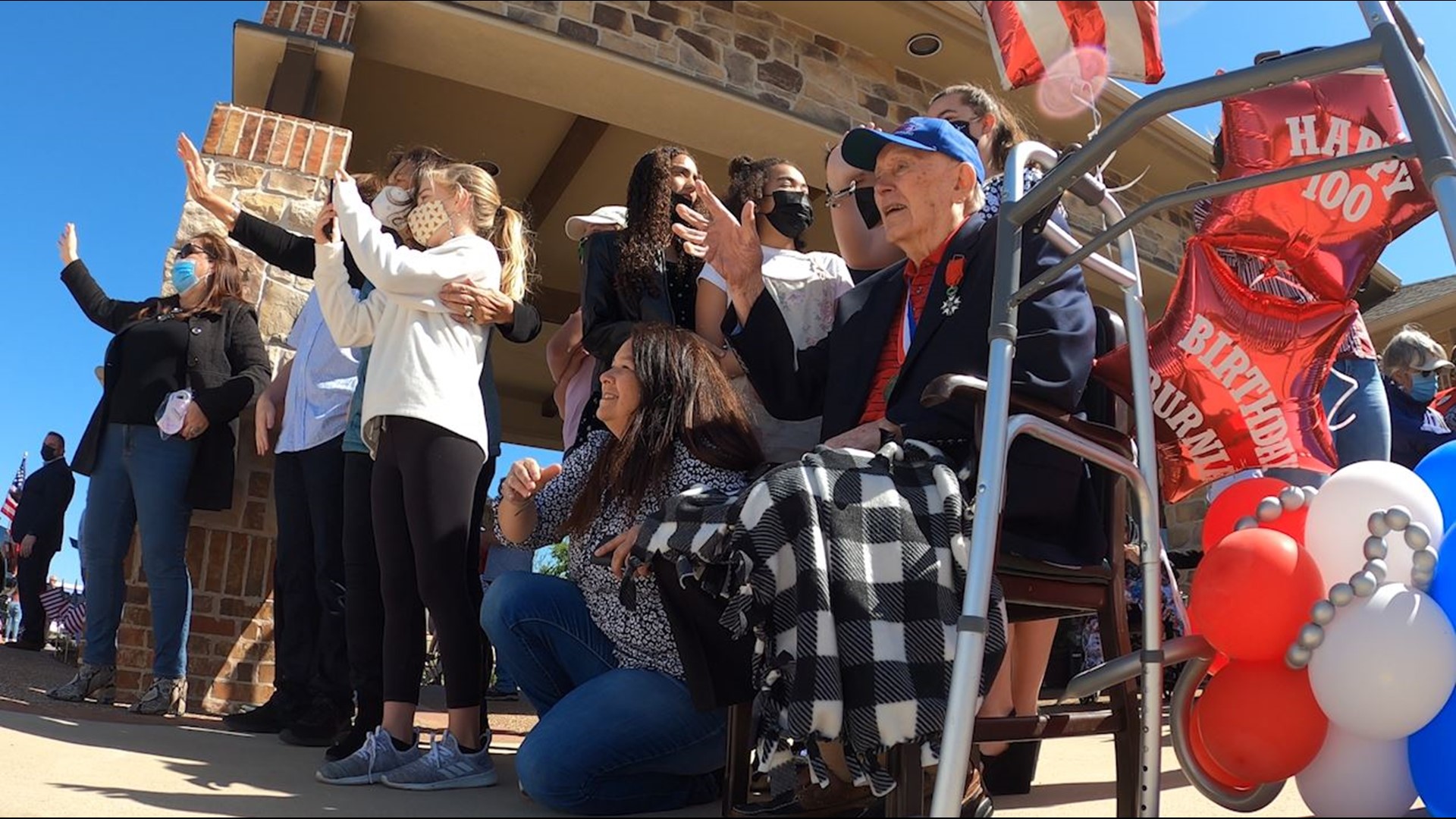 FRISCO, Texas — As Burnie Sutter approached his 100th birthday earlier this month, his daughter admitted that she often felt she was one of the few holding onto the memories that, for Burnie, were beginning to fade. Frisco, by the hundreds, turned out on a sunny Saturday morning to pleasantly prove her wrong.

"What's it like being 100 years old?" Sandi Sutter Richards asked her father on a recent visit to her home in Frisco. "You said I'm an old...," she said prompting him.

"Old fart," he said as they both laughed.

But Burnett "Burnie" Sutter, a WWII veteran his fellow soldiers dubbed "Smiley,"  is so much more than that.

He landed on Utah Beach in Normandy with the 90th Infantry Division under General George S. Patton. He was a machine gunner in the 358th M Company.

He fought in many of the major battles across France and Germany, including the battles at Seves Island and Falaise Gap. He was part of Operation Cobra and the Moselle River Crossing.

On April 23, 1945, he was part of the American forces that liberated Flossenburg Concentration Camp near the Czechoslovakian border.

The problem, at 100, is that those memories and accomplishments are beginning to fade.

"I tell people who want to talk to him that I'm his memory now," his daughter Sandi said.  "He's been my hero for a long time. Because I've known his story for a long time. I just think somebody has to keep the story going."

RELATED: Rick Perry pushing for Texas bill that would study psychedelic drugs for PTSD in vets

And one week ago, on a Saturday morning, reinforcements arrived to help her keep that story going.

Sutter lives at Saddle Brook Memory Care in Frisco. And just a few days after his 100th birthday, 100 vehicles took part in a parade as he and other residents of Saddle Brook sat outside. Vintage vehicles, restored WWII Jeeps, and even a decorated golf cart or two paraded past Sutter as he waved and saluted. His three grandchildren and eight great-grandchildren were at his side celebrating with him.

An airplane, provided by the Frisco non-profit Families of WWII Veterans even appeared overhead towing a banner that said "Happy 100th Burnie - WWII Hero."  The organization also announced it has established an annual $2,500 scholarship in Sutter's name that will go to a deserving college-bound student.

"My father was a WWII veteran too," said Families of WWII Veterans founder Barbara Fasola. "We just want to honor heroes like Burnie any way we can."

"I'm just trying to keep as much of his memory alive as possible," Sandi Sutter Richards said, thanking the parade participants and everyone who came out to honor her father. "I am just extremely proud of him, even though he's not always in the moment anymore, but I am and our family is. I just think we need to pass that along to our children what these people were able to do to save our freedoms that we have today."

And back at her Frisco home, in a basket in her backyard, Sandi had plenty of additional evidence that her dad's stories, and praise for his accomplishments, are very much alive. She has received hundreds of cards and letters from all over the world, many of them from complete strangers, who wanted to send their well-wishes for Burnie's 100th birthday.

"How cool is this? Isn't that great," she said as she looked at the collection of cards.

The message in all this, from a daughter, is that we all eventually become the keepers of our parents' memories. But, when it comes to her dad Burnie Sutter, she learned that Saturday morning in Frisco that she is not carrying those memories alone.

"I have to say I thought I was the only one tooting the horn for a long time. Now I see there are a lot of others out there."