'This hate is not just falling from the sky' | Thousands rally in Central Texas for change, justice for George Floyd 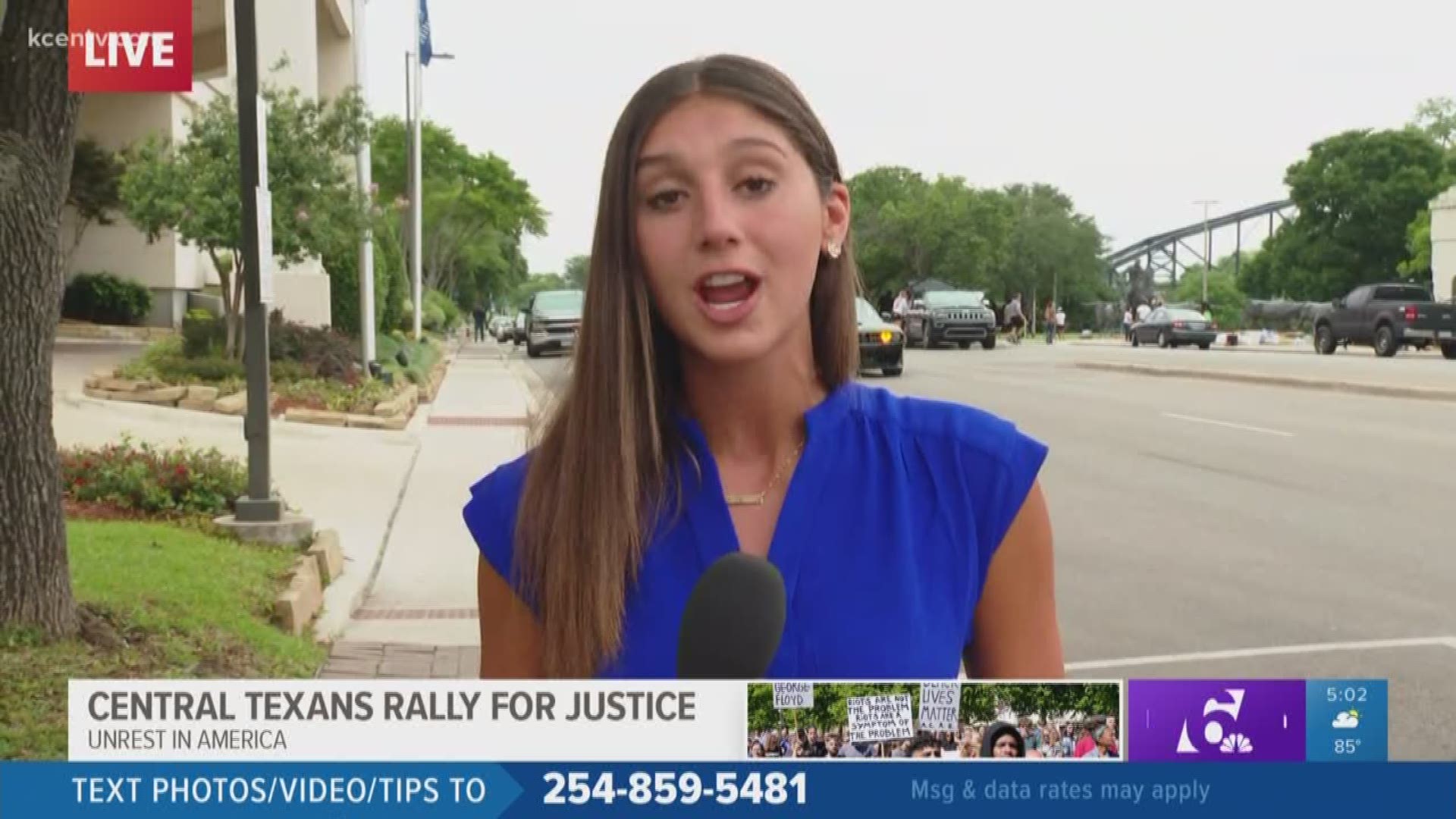 KILLEEN, Texas — The Let's Move Protest on Fort Hood Street in Killeen was buoyed by music and singing as a community continues to rally together following the death of George Floyd in Minneapolis, MN on Monday, May 25.

Derek Chauvin, an officer with the Minneapolis Police Department was seen on video kneeling on the neck of Floyd who was begging for air. Floyd died as a result of the incident which has sparked nation-wide outrage.

Chauvin was fired on Tuesday and was arrested and charged with third degree manslaughter on Friday.

Shouts of "No justice, no peace" echoed through the crowd at times, a group that referred to themselves as "family."

Ayaya Fubara Eneli, took the microphone, addressed the hundreds of people gathered asking them if they believed the words they were saying when it came to "No justice, No Peace," or if they were just words to be spoken.

"Good evening family," she said, the crowd answering her in the same way. "It is so interesting you would start that chant because of the 21-year old in Columbus, Ohio. I was on the front lines of a protest where we were shouting those same words but I have a question for you: are we just shouting words out or do we mean it?"

The crowd shouted back they meant it, so she asked them a follow up, wanting to know what justice means to them.

"I come here not in my own power or in my own right, but I come here representing our ancestors and I just want to take a moment to acknowledge their spirits and their presence right in this place," Eneli said.

The crowd erupted in cheers as she started calling out names of history like Harriet Tubman and others who passed away as leaders of generations years before.

"Our ancestors have a lot that they want to say to us today," Ayaya told those gathered. "It's so easy to have this empty rhetoric, it's so easy to act like all of this just happened and that they are not systemic structures in place that has allowed this to continue happening."

She called the Let's Move Protest a righteous fight and that it isn't just about Black Lives Mattering and that it isn't about "our white so-called allies and friends telling us 'I wish I could understand what you're going through, I stand with you.' This is about every single human being understanding we're all interconnected and one affects one affects another."

Eneli didn't mince words when she talked about the hurt the black community is feeling, not only today, but everyday this kind of thing happens.

"When we talk about the hurt we are feeling and when someone else says 'I don't understand your hurt because I don't feel it,' they need to do more work," she said. "They need to understand the hatred that could be in another person's heart when you see somebody and the first thought is to take their life. They need to understand what is going on the minds of all the people who have built and are upholding the racist structures that allow this to continue to happen."

She said she doesn't let her own friends off the hook.

"I tell my friends it's not enough to say 'I wish that I could walk in your shoes, I wish that I could understand,' Eneli told the crowd gathered. "No, you can understand if you take the time to understand what's going on in your heart and in your community and the conversations you need to be having around your dining room tables."

She told the peaceful protesters that this hate that is happening in America isn't just falling from the sky.

She then quoted Frederick Douglass, the famous American social reformer, abolitionist, orator, writer, and statesman: "The person who said they want freedom but is afraid of agitation is like someone who said they want crops but I don't want to plant!"

She asked the crowd what they were going to do, demanding the crowd not to do anything with violence. Instead, she demanded, stand up for our own humanity.

"If you are here today and you are as diluted as I use to be, it is your right as a human being and as an American citizen, 2nd Amendment right, to be armed," she said. "Because here is what I am saying, if you're coming for me or mine, my blood will not be the only one shed."

Eneli told the protesters that she is not violent and that she is not going after anybody but warned anyone who would listen that she won't sit back if it reached a personal level, and neither should anyone.

Eneli went on to tell everyone in attendance and who would hear her words to use every means you can to obtain and maintain your freedom. She said to use ballots, economics, education, your own weapons, wisdom and spirituality.

Ayaya also wanted people to know they shouldn't allow politicians to come around and blow smoke, instead, call them out, check their records, ask what they are doing for them.

Eneli called out, what she called, "the sellout black folk," and wanted them to know what they are doing is not new, saying the African American Holocaust was organized by sell out black folk and she warned them, even the ones watching right now, that their judgment day is coming.

Ayaya also wanted those from the white community in attendance to know that while what they see on the television, some white people killing black people, that it's also killing them too.

"You need to be as invested in healing this as we are invested in stopping the killing," Eneli told the crowd. "There's no way you can tell me that people who brutalize other human beings in that manner, are not brutalizing their wives and their children."

She asked those of the white community that if they wanted to be a friend, to go and speak in those places where they are not.

"Stand up in those places, stand up against your own people," she implored. "I understand there is a price to pay because white folk killed John Brown and they also killed the lady who went to march in Selma, a 39-year old white woman with five children who was driving people back and forth. The Ku Klux Klan killed her because she 'was supporting' the civil rights of African Americans."

Eneli said she knows there is a price for white people to pay if they stand up and speak out against the hatred from their own people but said there is only one real choice in all of this.

"If you don't pay it," she warned, "then your community suffers just as we suffer."

To close her speech to those who gathered, Eneli quoted the great Henry Highland Garnet, an African American abolitionist, minister educator and orator who said that "resistance, resistance, no oppressed people have ever secured their liberty without resistance."

"Ladies and gentleman, I am here to stay, black people are here to stay," she shouted. "We're not going anywhere! You're going to have to kill with us and we will resist! God Bless y'all!"

The chants of "no racist police" could be heard echoing in Waco near the suspension bridge as thousands of people flooded the area during a peaceful protest Sunday afternoon.

Woodson, who took to Facebook to get the word out, only thought a few people would show up, but he was wrong.

"This is what the world needs to see. It can be peaceful," Woodson said, looking out at the protesters gathered and filling up University Parks Drive. "There aren't police our here acting crazy. It just doesn't need to be like that."

Woodson posted a flyer to Facebook letting everyone know that the planned protest would be peaceful at all times and that it was a chance for the community to come together against police brutality and racial injustice. 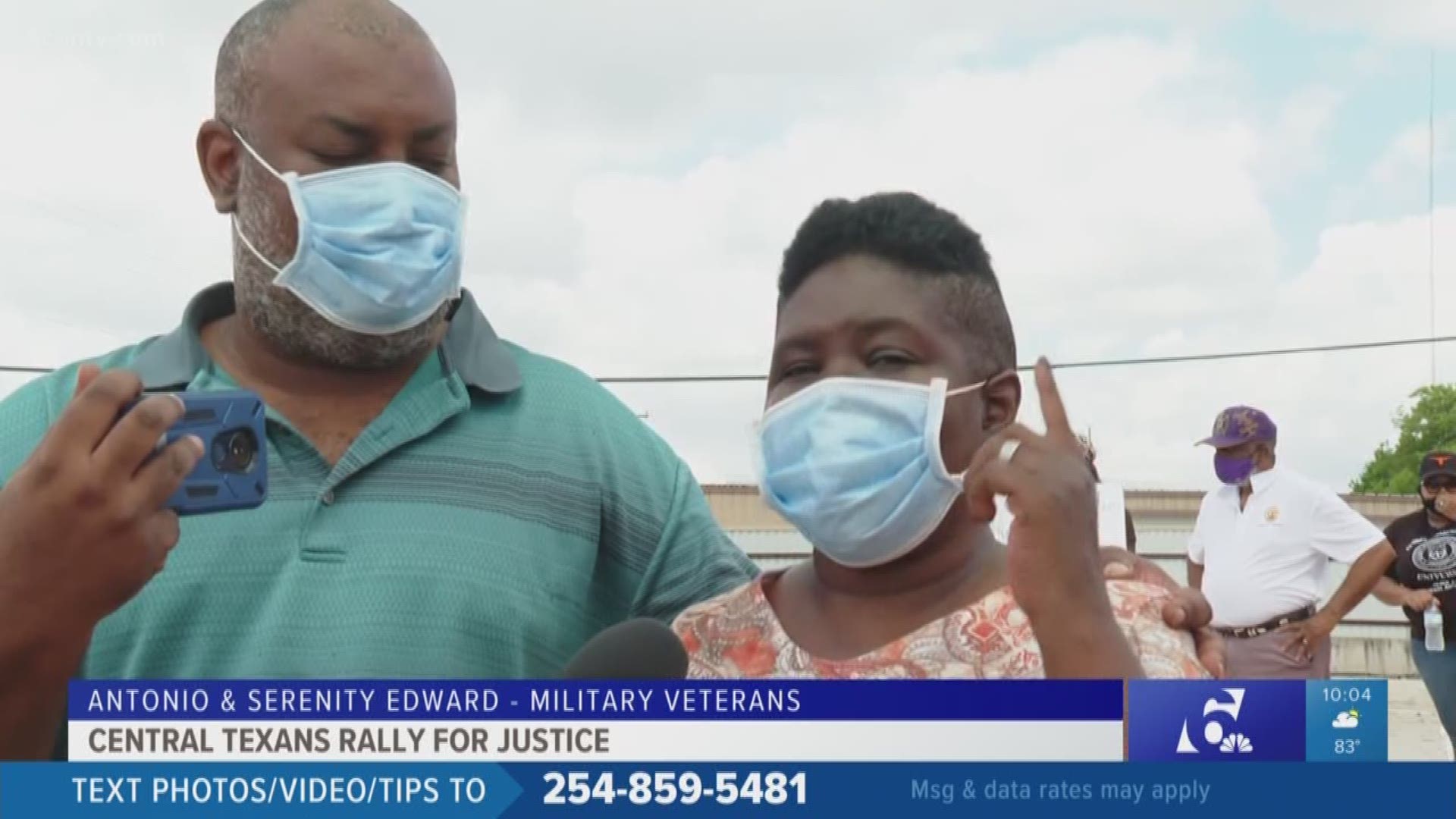 Protesters gathered at MLK Blvd. and Veterans Memorial Blvd. in Killeen Sunday morning in response to the death of Floyd, at the hands of a Minneapolis police officer.

The group held signs that read "Don't Shoot," "Black Lives Matter," and called for an end to no-knock warrants.

The event was organized by Gia Lopez. She said she was proud to see how many people came out and encouraged anyone driving by to stop and join them.

"I just want to bring awareness to the police brutality and the fact that the police have not been being held accountable for their actions," Lopez said. "There's been too many cases of people being killed and murdered in their own home and nothing is happening about it."

Lopez also said that if anything does come out of it and something does get done in the name of justice, she said it's always the absolute bare minimum.

"I don't want to say that isn't fair because life isn't always fair but I don't feel like that serves equality of what we need," she said.

Lopez said that she wants things to remain peaceful as Central Texans come together to protest the death of Floyd.

"It's very important to me that it remains peaceful because I don't want to destroy my city," Lopez said. "I'm from here, raised here since I was five years old. I love it here. "

Lopez did say she isn't against the rioting that's been taking place across the country, however.

"I'm not going to say that I'm against the rioting because it's opening a dialogue for the injustices that are going on that black people and other people of color go through daily," she said.

The protest, which remained peaceful and had children present, was the second in the City of Killeen since the death of Floyd. In a show of unity, several dozen people took part in the protest on each corner of the intersection.

Lopez said she is proud to stand up for Floyd and do something other than just sit at home sharing memes, instead the support has allowed her to feel the love of her community for a more than worthy cause.

On Saturday night in Temple, a small group of protesters gathered at N. 3rd St. and Central Ave. in response to the death of Floyd. That protest remained peaceful as participants held signs that read "Justice 4 George," "I Can't Breathe" and "Stop Police Brutality."

Aron Henry said while their protest was for Floyd they were also there in support of Michael Dean.

"We're with each other and thinking we have to do something," Henry said last night, reiterating it was peaceful protest. "It may be small but we have to have our voices heard somewhere somehow, so here we are."

Dean was killed during a traffic stop on Dec. 2 by former Temple police officer Carmen DeCruz. A police report showed Dean was not armed when he was shot in the head.

DeCruz was charged with manslaughter on Feb. 10.

'This is not a technique that has ever been taught' | Central Texas police, businesses respond to George Floyd's death

'You got to see us angry, now you get to see us peacefully trying to clean up'