Three indicted for murder; more indicted on other charges in 2015 Twin Peaks shootout

Three people have now been indicted for murder in the Twin Peaks shootout. 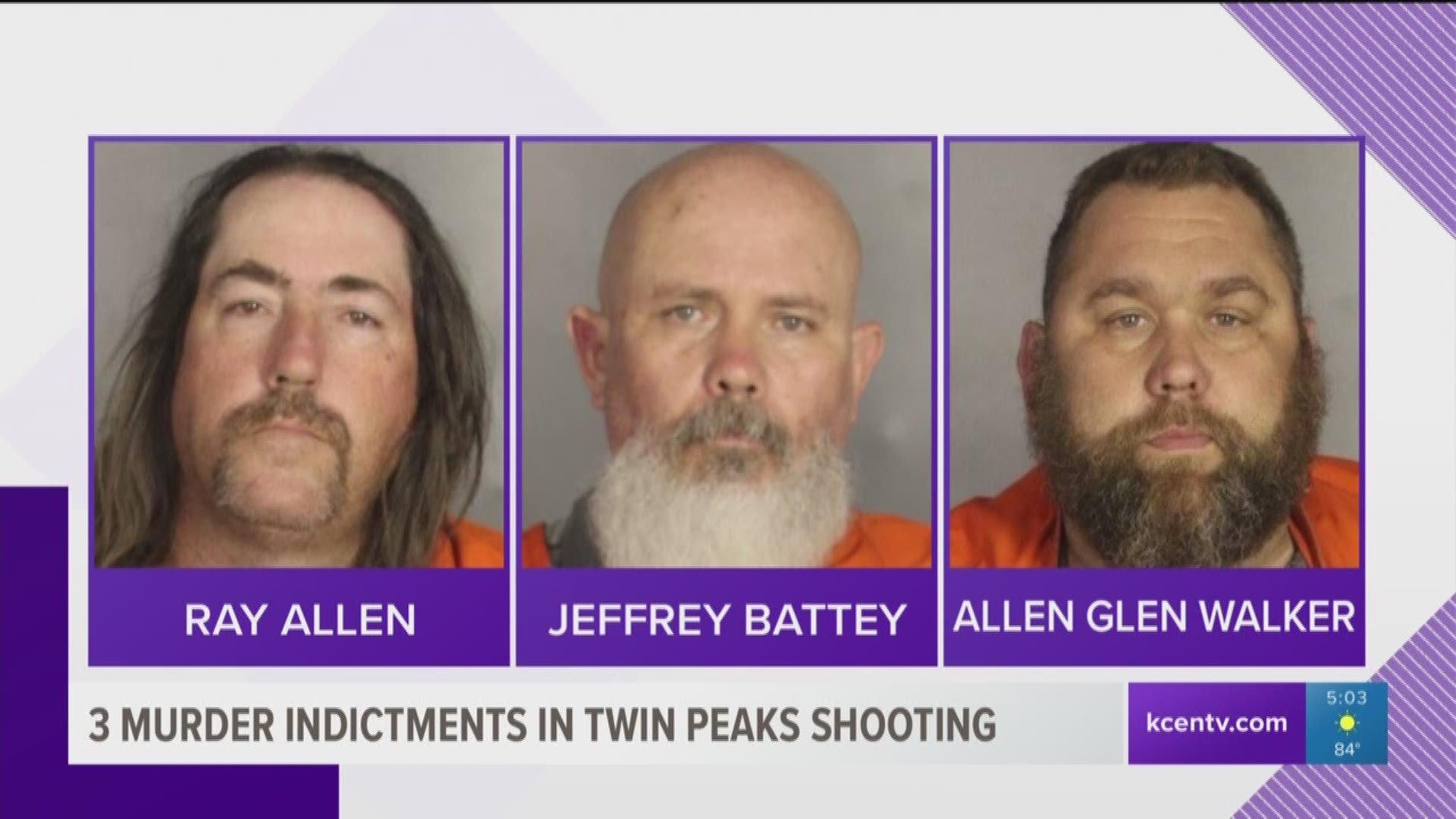 CENTRAL TEXAS — Just eight days before the statute of limitations expires, 25 people were indicted on new charges this week, in connection with the deadly May 2015 shootout at Waco's Twin Peaks restaurant, where nine individuals lost their lives.

Twenty-four of the people named in the indictments had previous indictments for engaging in organized crime. But, after Wednesday, three of them have now been indicted for murder -- while others are facing lesser new charges.

Ray Allen, Jeffrey Battey and Allen Glenn Walker were each indicted for one count of murder and one count of riot.

Jacob Carrizal, whose last trial ended in a mistrial, has now also been indicted on one count of riot.

Shayne Timothy Satterwhite was indicted for two counts of riot (enhanced) and one count of unlawful possession of a firearm by a felon (enhanced).

Kyle Smith was charged with two counts of riot and and one count of tampering with physical evidence.

Jeremy King was indicted for unlawful possession of a firearm by a felon (enhanced).

According to the McLennan County District Attorney's Office, the new indictments replace the charges previously indicted.

“Today, after considering numerous videos and other evidence, the Grand Jury issued 25 indictments for cases arising out of the Twin Peaks melee," McLennan County District Attorney Abel Reyna wrote in a statement. "Consistent with statements issued in February of this year, this is the culmination of our office’s reevaluation of those cases as we have worked to focus our efforts and limited resources in the pursuit of justice for the nine people that lost their lives on May 17th, 2015."

Since February, prosecutors have dropped 154 other Twin Peaks cases related to the 2015 shootout between rival motorcycle groups -- the Cossacks and Bandidos -- and law enforcement.

Clint Broden, founding partner of Broden & Mickelsen, released the below statement on behalf of his client, Richard Luther.

One would have thought that repudiation of Abel Reyna in the March primary would have resonated with Reyna and his assistants. Instead, Reyna appears intent on being the last player at the blackjack table at 3:00 in the morning who keeps doubling down until he is out of chips.

It is particularly ironic that Reyna has now sought an indictment against Mr. Luther for tampering with physical evidence, because the defense possess actual video evidence of law enforcement officials planting evidence on Mr. Luther at the time of his arrest. The District Attorney’s Office is in possession of that same evidence. Indeed, today’s indictment is as specious as the original indictment.

It is fortunate that Reyna’s reign will soon be over and a modicum of justice restored to McLennan County. We are hopeful that, when the new District Attorney takes office and no matter who that person may be, he will quickly clean house of any person in the office that has been connected with this shameful saga.