US Capitol Police officer dies after being injured during Capitol riots

USCP said officer Brian Sicknick was "injured while physically engaging with protesters." When he returned to his office, he collapsed and died at the hospital. 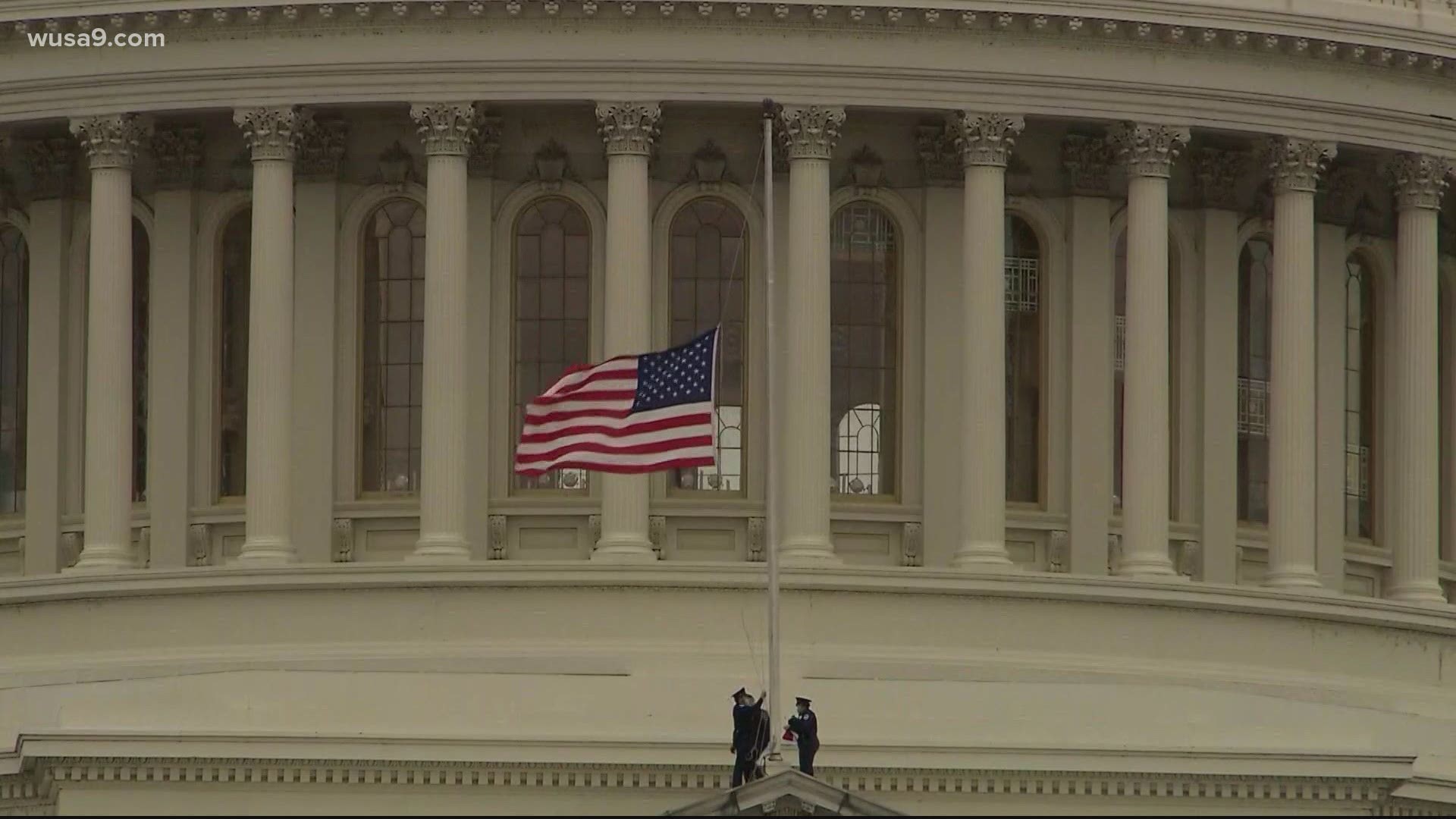 "Officer Sicknick was responding to the riots at the U.S. Capitol and was injured while physically engaging with protesters," USCP said in a statement. "He returned to his division office and collapsed. He was taken to a local hospital where he succumbed to his injuries."

Sicknick served in the New Jersey Air National Guard, deploying repeatedly to the Middle East. He is the sixth Capitol Police officer ever to die in the line of duty.

The Associated Press reported that Sicknick's family does not want to make his death a political issue, as there are still questions about what happened.

“Brian is a hero and that is what we would like people to remember," Officer Sicknick's brother, Ken Sicknick, said in a statement."

Family of slain Capitol Police Officer Brian Sicknick says they don't want to make his death a “political issue” as many questions remain about what happened. Statement says: “Brian is a hero and that is what we would like people to remember.” @wusa9 via @AP pic.twitter.com/RO4ZpMQoEd

The force's union Chairman Gus Papathanasiou originally told WUSA9 that the officer had passed away earlier in the day Thursday, but then said he was still on life support until his family was able to see him. It was confirmed that he had passed away by USCP's communications director around 9:30 p.m.

"Officer Sicknick was killed while doing his job—defending those trapped in the Capitol building amid a violent attack on our democracy," Virginia Gov. Ralph Northam said in a statement Friday. "His death is a tragedy, and those responsible must be prosecuted to the fullest extent of the law. My prayers and those of the entire Commonwealth go to his family, his loved ones, and his fellow officers who work every day to protect the seat of American democracy from those who would seek to destroy it.”

The White House said Sicknick's death was a reminder that law enforcement runs toward danger, while Speaker Nancy Pelosi said "the perpetrators of Officer Sicknick's death must be brought to justice."

Flags at the Capitol were lowered to half staff Friday in honor of Office Sicknick.

The U.S. Attorney’s office declined to discuss the investigation, which is being done jointly by the FBI and DC Police. But investigators said that if the medical examiner finds he was hit in the head and that contributed to a stroke and his death, that would be murder. And because it happened on federal property, those responsible would be charged with murder in federal court.

The North America Building Trades Union is offering a $100,000 reward for information that leads to an arrest.

The news of Sicknick's condition came minutes after US Capitol Police Chief Steven Sund resigned from his position. The announcement of Sund's resignation came Thursday evening after U.S. House Speaker Nancy Pelosi (D-Calif.) and the president of the Capitol Police Officer's Union both called for him to step down.

Outside of the officer's death, four initials deaths were reported from the riots Wednesday, including the fatal shooting of a woman by Capitol Police. She was shot when climbing into the House Chamber, according to information released by DC Police. Three others died from medical emergencies, DC Police said.

Videos posted to social media saw badly outnumbered Capitol Police officers trying to hold the line Wednesday against a pro-Trump mob, some of whom were armed, intent on pushing its way into the Capitol. More than 50 Capitol and D.C. police officers were reportedly injured while responding Wednesday.

This video of the siege of the Capitol on TikTok is crazy and different than I had seen pic.twitter.com/JXwvKVLjxB

But other videos from the day also went viral, including one of a Capitol Police officer appearing to agree to a selfie during a live stream by a member of the group that had breached the building. At the point the video was taken, the mob had already violently pushed its way past the Capitol Police line and caused the evacuation of two Congressional office buildings, plus the lockdown and eventually evacuation of both chambers of Congress.

Within just a few hours, the video had been captured and re-uploaded by dozens of other accounts, some of which had drawn hundreds of thousands of reactions on Twitter alone.

It’s a dark day in America when a UNITED STATES Capitol police officer decides to take a selfie with a TERRORIST! And they wonder why WE don’t feel safe! pic.twitter.com/UZsLnS2s68

A GoFundMe has been set up in Sicknick's name that was started by an officer with the Capitol Police Department. WUSA9 has confirmed that the proceeds of the GoFundMe will go directly to the family of this fallen officer.

To donate to the GoFundMe for the fallen officer, click here.