An affidavit obtained by KVUE reveals that University of Texas senior football player Kent Perkins was involved in a collision in Downtown Austin Friday morning before he was charged with driving while intoxicated. 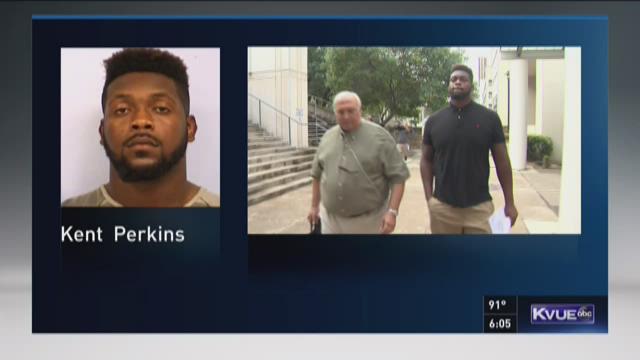 UPDATE: University of Texas Head Football Coach Charlie Strong said Monday that the football player who was arrested early Friday morning for DWI will serve a one-game suspension and have community service.

PREVIOUS STORY: An affidavit obtained by KVUE reveals that University of Texas senior football player Kent Perkins was involved in a collision in Downtown Austin Friday morning before he was charged with driving while intoxicated.

A constable told police he found Perkins, an offensive lineman, asleep in his car in the drive-thru line of Raising Cane's on Martin Luther King Jr. Boulevard at around 2:43 a.m. The constable told him to move his car, as he was blocking the line into the fast food restaurant.

The constable stated that about 10 seconds later, he heard a loud crash just down the street. The constable walked to the parking lot at 18th Street and San Antonio Street where the same vehicle had crashed. When he approached the vehicle, he found Perkins asleep behind the wheel. The constable then turned off the engine and removed the keys before calling the Austin Police Department.

Kent Perkins at a press conference.

When Perkins was booked in the Travis County Jail, a preliminary breath test resulted in a reading of .178.

Later in the morning, Perkins was released from jail.

Starting Texas OL Kent Perkins out of jail. He refused to answer any questions, walking silently by reporters @KVUE pic.twitter.com/fWpGiIWPnf

In a statement released by Texas Head Coach Charlie Strong, he said "we are aware of the situation involving Kent Perkins and gathering facts at this time."

"We're disappointed in his actions and take a strong stance against drinking and driving," the statement read. "When you get behind the wheel after drinking, you not only risk your life, but the lives of others, and that's something you just can't do. We will make sure that Kent learns from this and handle any punishment once we have more information."

Texas Longhorns tackle Kent Perkins (76) in action against the Oklahoma Sooners during the Red River showdown at the Cotton Bowl.