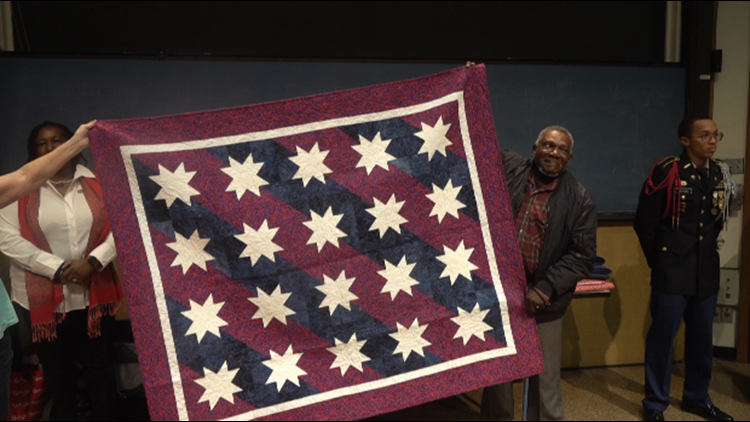 TEMPLE, Texas — Army Veteran Victor Wiggins Jr. served his county from 1972 to 1992. He's been stationed in Korea, Germany and on Fort Hood.

Wiggins is also the Vietnam Veterans of America Chapter No. 1000 president and said he has helped facilitate Quilts of Valor ceremonies before. It was not until last week, however, that Wiggins found out he would be receiving his own.

"I've never felt receiving one," Wiggins said. "I'm a servant. I love serving all the men and women that I can serve. When I received word I was getting this it was unbelievable to me."

The Quilts of Valor Foundations works to "cover all those service members and veterans wounded physically or psychologically with comforting and healing Quilts of Valor," according to the Foundation's website. It was formed in 2003 and now works with partners across the country to help soldiers affected by war.

Ten local veterans were awarded a Quilt of Valor Thursday thanks to the Texas Patriotic Piecemakers, a partner of the Quilts of Valor Foundation. Nine of those veterans work for the Central Texas Veterans Health Care System in the Temple area.

Wiggins said the quilt is comforting to him and has been to many others.

"Some come back without even a hug or a kiss or a wave," Wiggins said. "It can help one to be wrapped up in love and affection and that's what  it's about."

Navy veteran Manuel Bustoz said the blanket and the people who make them made him feel comforted as well.

"It's a group of people willing to act as that metaphorical blanket to those who have served," Bustoz said. "To me, to be wrapped up on a blanket is somewhat similar to someone wrapping their arms around you to support you or just to comfort you."

Wiggins said one of the most important things about the quilts is the way it brings comfort to the families as soldiers as well.

"They'll go back to their families and maybe for a minute they'll say 'don't touch that' but then they will be wrapped in it as well and let them feel what they are feeling," Wiggins said.

Thursday's ceremony was the fourth held so far at the Central Texas Veterans Health Care System in Temple.