Officials say the attitude that it could never happen to you is a dangerous mindset and just what thieves are banking on. 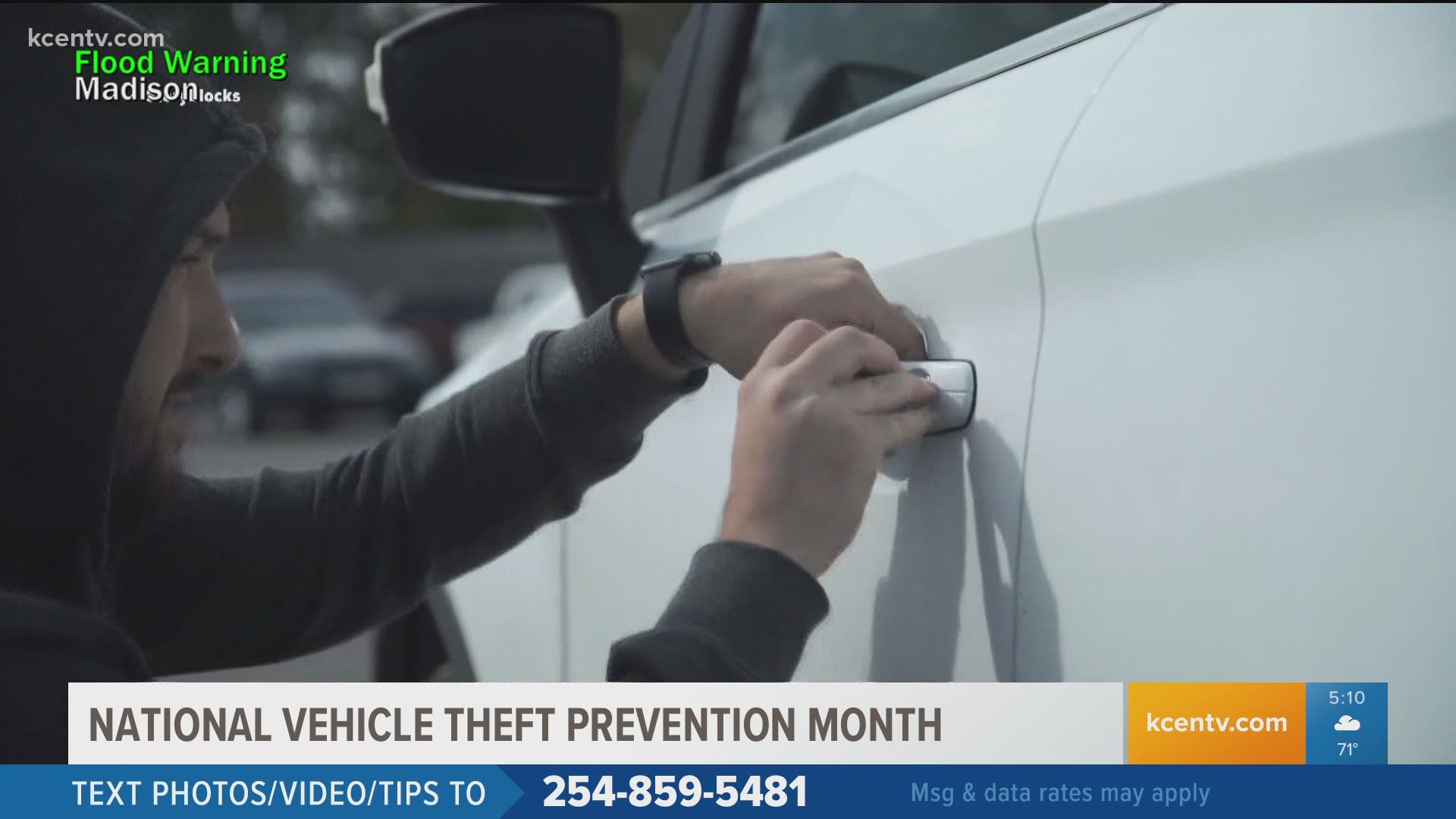 TEMPLE, Texas — July is a busy month for law enforcement officials because it's the month that sees the highest number of vehicle thefts nationwide. Texas is no stranger to that fact.

"First thing I would tell you is to remove anything of property value to you out of your vehicles -- purses, wallets, laptops, cell phones, even loose change, I'd take that out as well," said Temple Police Chief Shawn Reynolds, who also said stealing vehicles is big business and it can happen to anyone.

In 2019, there were were 721,885 vehicles stolen across the country and that number cost victims $6 billion according to the FBI. According to the U.S. Department of Transportation’s National Highway Traffic Safety Administration (NHTSA), a vehicle is stolen every 43.8 seconds.

"It's just a massive amount of personal property that's been taken from individuals and perhaps under a lot of different circumstances, but I am happy to report currently in the City of Temple vehicle thefts are down 43% at the end of June to where they were last year," Chief Reynolds said.

Temple police said they've made a concentrated effort to spread the word and educate the public on vehicle thefts through targeted social media campaigns.

According to records obtained from the department, Temple PD had 326 vehicles reported stolen in 2020, a nearly 60% jump from 2019 when they had 193 stolen vehicles. So far this year 103 vehicle thefts have been reported, down from the 175 open cases at the same time last year.

The Waco Police Department also released their records to 6 News, which showed 503 vehicles had been stolen last year, up from 385 stolen vehicles in 2019.

Statewide, the Texas Department of Public Safety (DPS) reported 76,687 motor vehicle thefts in 2019, a 10% increase from 2018. The collective financial loss by Texans who suffered a vehicle theft in 2019 was over $1.2 billion.

“Finding that your vehicle has been stolen can be a stressful event,” said Dr. Steven Cliff, NHTSA’s Acting Administrator. “Vehicle theft is driven by money and greed, a dangerous business that victimizes everyone, but fortunately, drivers can take precautions to reduce the risk of it happening.”

The NHTSA said it comes down to using common sense when parking and exiting your vehicle:

Chief Reynolds is encouraged by the lower number of vehicle thefts in Temple and said the decline has to do with a lot of variables as far as he can tell.

"Occasionally you find yourself with a cohort population group, generally most crimes are committed by those ages 16-23 roughly. You get a high number of folks in that age group that are doing that," he said. "Perhaps we've arrested a couple of key offenders and they are currently incarcerated for vehicle theft."

Reynolds said he also thinks evolving vehicle technology has helped curtail the crimes, saying there's a lot of ways people can track their vehicles, like GPS or Sirius XM.

While the numbers are down, Reynolds doesn't want people to relax and wants everyone to stay vigilant. The attitude that it could never happen to you is a dangerous mindset and just what thieves are banking on.

"The myth that this will never happen to me, unfortunately, gets permeated throughout our culture and society. The fact of the matter is, most of these crimes are almost always preventable. We can really prevent crime if we work together," he said.