The Humane Society of North Texas said the conditions in the Hill County home were so bad investigators had to wear hazmat suits. 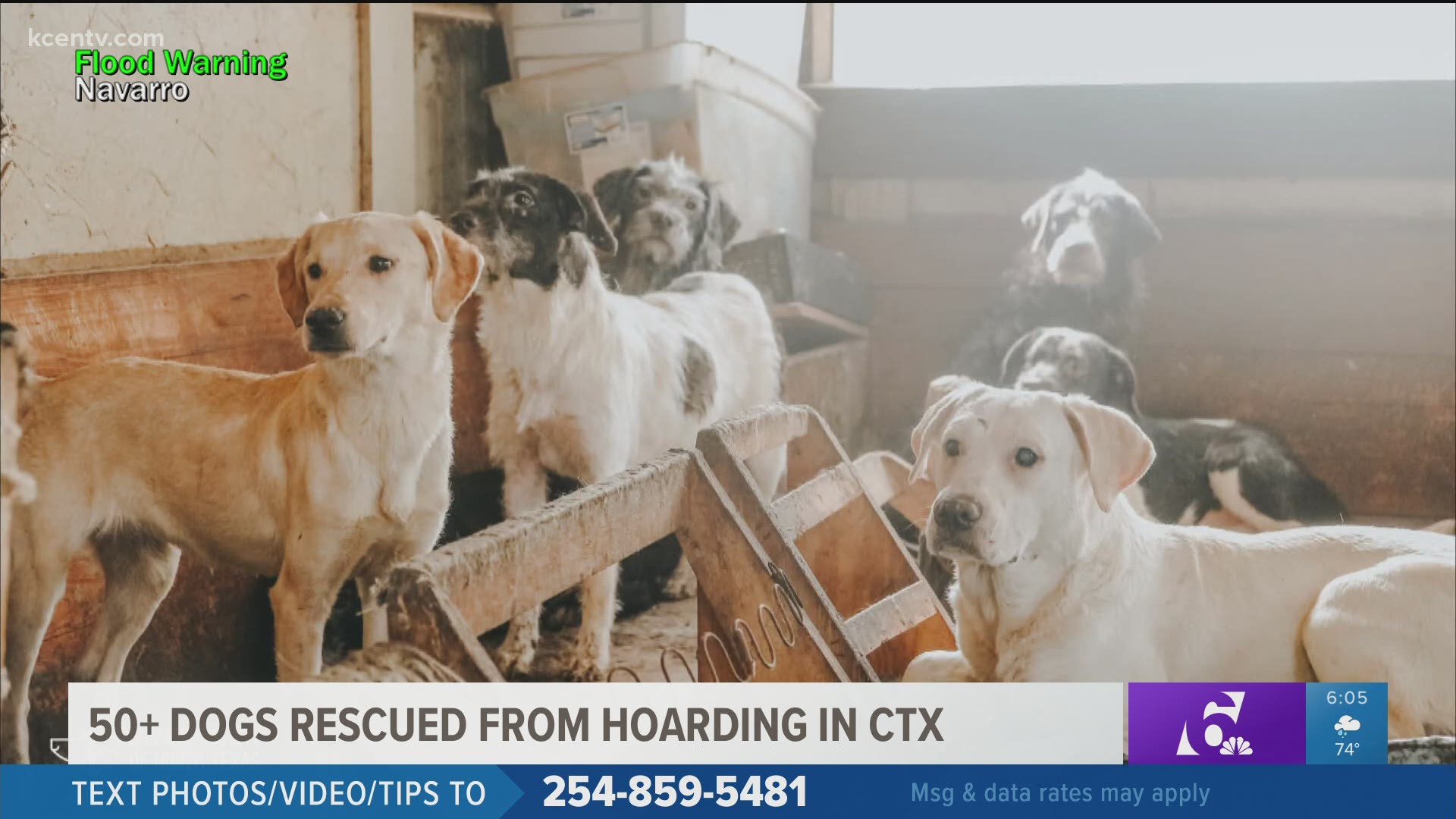 WHITNEY, Texas — More than 50 dogs and puppies were rescued from a home in Whitney where the Humane Society of North Texas (HSNT) said was "dilapidated, trash-filled and feces-covered."

The HSNT Cruelty Department said they went to the home on April 12 along with the Hill County Sheriff's Department to rescue the dogs. Investigators had to wear hazmat suits and respirators due to the high levels of ammonia, according to the HSNT.

Photos and a video posted to the HSNT Facebook page show the dogs spread throughout the home and in crates outside.

The homeowner, Linda Kennemore, was still living in the home at the time.

"I understand, the pictures are horrific and you can't argue that. If they understood the true facts they would understand," said Michelle Ann with Cribs Rescue Project.

When asked how this all began, Kennemore said she tried contacting Animal Control for help, but to no avail.

"I said, I'm just kind of getting tired and weary of everything and he said, what do you want to do, and I said, well, I'd like to surrender the dogs that I have," Kennemore said.

Kennemore said the initial conversation took place in January 2020 when she had 22 dogs on her property, five of them were her own, the rest the product of being dumped.

Ann said she was contacted by Kennemore on April 1 of this year about needing help.

"I thought it was kind of an April Fools joke, that's why I remember the date," she said. "She reached out and asked for help, I talked to her on the phone and she did inform me that there was a cruelty investigator from the Humane Society of North Texas that was working with her."

Ann said when she learned of that, she said she got the investigators number because they can't interfere with an investigation. She said shortly after that, on April 12, the HSNT went in and removed some of the dogs.

"I do know from past experience that when you work with a hoarding case you, don't just go in and remove some of the dogs, I mean hoarding is hoarding," she said.

Ann said HSNT didn't help Kennemore and instead, she said, they made things worse.

Ann said they didn't finish what they started and left Kennemore in a worse condition.

Cassie Davidson, the Director of Communications with HSNT, said the reason they left some dogs behind had more to do with capacity at their facility.

"For us, it's a capacity issue and our cruelty building can only handle so many pets, both dogs and cats," Davidson said when asked why so many dogs were left behind during a hoarding case. "So, we pulled what we had the capacity to pull with the understanding that we would be coming back."

Davidson said HSNT's Cruelty Director has worked with numerous local rescues in Hill County who gave them permission to pull as many cute dogs as possible.

Kennemore said she became overrun with dogs after she felt she was forgotten about after making her initial plea to an Animal Control officer in Hill County. She said the experience has been traumatic.

"Not knowing what was going to happen to them, it's been one of the worst memories I will ever have in my life," she said, through tears. "You know, I just want my babies to be able to get into a good place and then I'll worry about me."

Kennemore, who is currently living in a trailer on her property, isn't able to return to home, described as a dilapidated, trash-filled and feces-covered residence. HSNT said the dogs were infested with fleas and suffered from varying skin issues and hair loss due to the unsanitary living conditions. The dogs also were afflicted with numerous types of intestinal parasites including hookworms, roundworms, whipworms and tapeworms. Many of the females were pregnant or had recently given birth. The moms and babies, the youngsters and the aged were all covered in feces with nowhere to escape this torment of living in deplorable conditions–parts of which included approximately 3 feet of compacted urine and fecal matter.

Ann, who has been working to help Kennemore through her rescue, said she understands the outcry from people who commented on the HSNT Facebook page but also believes people don't fully understand the situation.

"For all the haters on that were sending her death threats, it's overran by the people who say 'what about the poor owner,'" Ann said.

Ann said many people have asked how they can help Kennemore and while she is bothered by the comments on social media, she is trying to stay positive.

"Show some compassion," she said to those quick to judge. "This is not your normal hoarding situation because this is someone willing to hand over the dogs because she's overrun by stray dogs that have bred multiple times."

Davidson said she would agree that this is not your typical hoarding case saying pet overpopulation can occur quickly. She said Kennemore has worked with them from the moment they made contact with her.

"This homeowner has been very agreeable and very connected. This homeowner truly truly cared about the dogs that she had, the cats she had," Davidson said.

The HSNT said they will continue to work with Kennemore and to pick up the rest of the dogs when capacity allows.

"We will be on-site shortly with more food and to evaluate what other rescues have been able to accomplish," Davidson said in an e-mail. "We did exactly what we were asked to do based on our capacity. We emptied the home."

Ann said she will continue to help Kennemore in the coming days and weeks ahead and hopes those that spoke negatively, realize the damage it's caused.

"She is scared for her life because she's gotten death threats," Ann said. "If they only knew the true story they would understand."

Ann also said she's upset the HSNT left Kennemore homeless and is calling on anyone who can and is willing, to help them get her back inside her home.

"We need help, we need somebody to come in, clean it up, paint it, freshen it," she said. "There is no big damage, the floors aren't falling in but it just needs to be cleaned and sanitized."

Davidson tells 6 News there is a possibility that 3 to 4 of the dogs rescued April 12 would be available for adoption this weekend.