A code word could protect your child from abduction. It worked for this Georgetown family

A stranger told a Georgetown teen his mom asked him to pick him up so that he wouldn't have to walk in the rain. 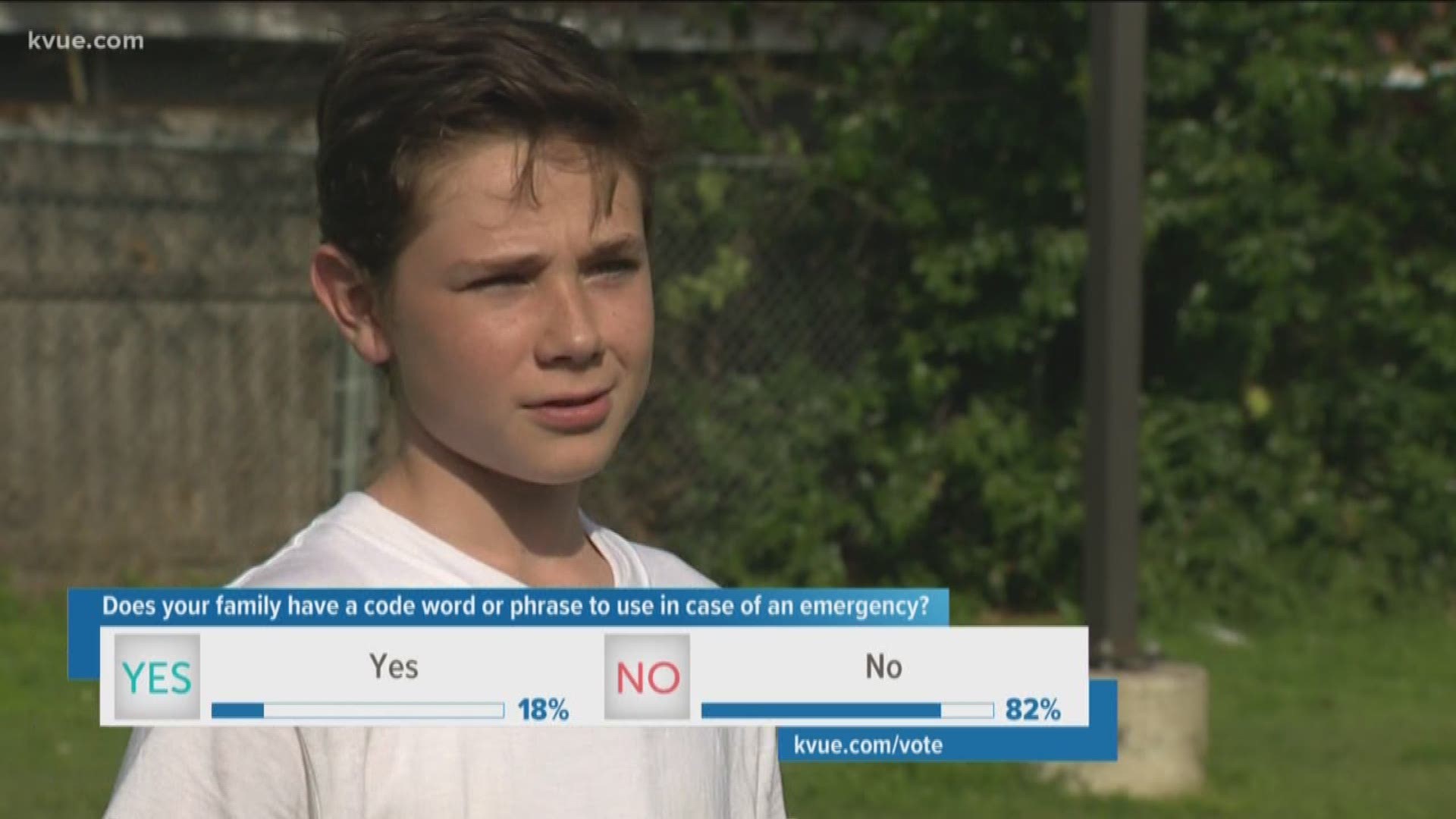 GEORGETOWN, Texas — A Georgetown mother is thankful her 13-year-old son is OK after a scary encounter on his walk home from school Monday afternoon.

"I was grateful that he walked into that door," Adrianna Eldredge said.

Daniel, a seventh-grader at Benold Middle School, told Georgetown police a strange man pulled up next to him while he was walking on Northwest Boulevard.

The man claimed Eldredge sent him to pick Daniel up so he wouldn't have to walk home from school in the rain, police said.

Daniel was about to enter the SUV when he asked the driver a question.

He told his mother as soon as he got home. She's still shaken up about it.

"[The man] is still out there. He might grab somebody else's child," she said.

Eldredge came up with the code word years ago when her children were much younger and their aunt and uncle would pick them up from school.

Had they not shared a code word, Eldredge fears her son wouldn't be safe.

"He would've thought that I sent that person to pick him up from school because I wouldn't want him walking in the rain," she said.

Roland Waits, the field operations manager with the Georgetown Police Department, praised the family for having a code word.

"We commend the mom and the family and the young man," he said. "Great parenting to have a code word to be set up for just these types of things."

Waits said cases like these aren't common in Georgetown, but he recommends that every family with young kids has a code word.

"When parents sit down and talk to their kids, it has to be something they're going to remember," he said. "I wouldn't necessarily use names of relatives, [pets] or anything. That information could be found out there."

"I don't want to see anybody's child end up missing anywhere in the world, but let alone here in my hometown. This is a neighborhood of kids. We try to keep everybody safe here," she said.

The Georgetown Police Department described the suspect as a clean-shaven male in his late 30s to early 40s with short hair. Additionally, police said he was last seen wearing a grey and bright yellow baseball hat and a dark, short-sleeve shirt.

Georgetown police described the vehicle as a box-shaped, black Honda SUV with a dirty interior that smelled of cigarette smoke. The Georgetown Police Department has asked that anyone with information on the incident contact them.

What happened on Monday has Daniel thinking twice about trusting adults, and he hopes what happened to him serves as a warning to other kids.

"Don't get in the car unless you really know them," he said. "My life could've been over. And I know I'm here to do something."

WATCH: Talking to your kids about online safety

Traffic in Austin ranked one of the worst in the United States, report says