'They were my friends, they were my co-workers' | Veteran shares photos taken when twin towers fell on 9/11

Salvatore Diventi was just a block away, taking a seat in his office when the first plane struck. He left office and captured the tragedy on camera. 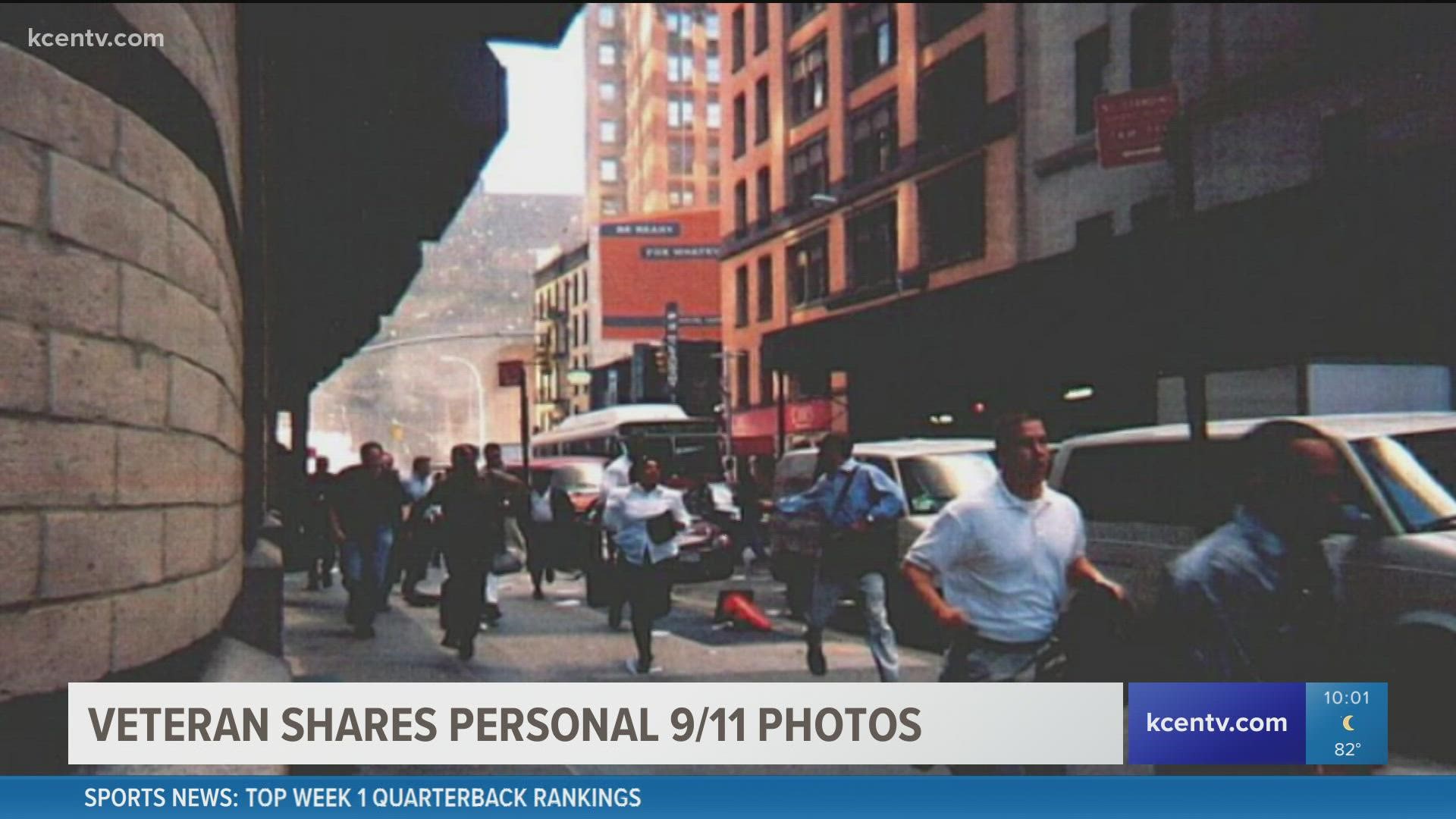 MCLENNAN COUNTY, Texas — Salvatore Diventi was a block away from the World Trade Center in an office when the first plane stuck. He described the sound as an 18-heweler carrying pipes crashing into something.

"I told one of my guys to run out there and see what happened. He says 'A plane hit the building.' I ask 'What kind of plane was it?' He says, 'A big plane,'" Diventi said.

Diventi decided he had to see it for himself. Being a Vietnam veteran and a photographer, Diventi decided to buy several disposable cameras and go toward the crash site. Then he saw the second plane strike.

Diventi "emptied" several cameras over the rest of the day. He shared those photos Wednesday, days before the twentieth anniversary of 9/11.

"I took the picture right as the plane hit and all the aluminum and stuff that came off the building, the siding, started raining down on me," Diventi said. "Running to me is all the people that were on the other side at a police line."

Diventi reflected that he probably should have been running with them.

"If it comes down, where I am standing is a bad place," Diventi said.

He went back to the XEROX office, where he worked at the time, to make a plan with the other employees. There wasn't enough time, however. The second tower had started to fall.

"Tower two comes down. It comes down with a crash like you can't imagine. I though for sure the building was going to fall right where we were," Diventi said.

Instead, dust covered the streets around the downtown area. Diventi and other employees got to the street and started to move away from the towers.

"You couldn't see your hand in front of your face," he said.

As Diventi and a friend continued to flee the area, he said the first tower came down. The dust became unbearable and he struggled to breath.

"How close I came to dying, I don't know. But I sure felt like I was running out of air. It could have been the same as if someone was holding my head under water and no way to get out," Diventi said.

Fortunately, he got to the New York Athletic Club and found safety. Now, 20 years later, the pictures remind him more of the several thousand people who didn't. Diventi said he had a lot of friends in the World Trade Center. He also lost one of his cousins that day. That's why he is sharing his pictures.

"I want you to understand that what you saw on the TV that day when that plane when though that building, it killed 3,000 people. That's what I want you to remember," Diventi said. "They were my friends. They were people that I knew for many years working in those buildings."

Diventi told 6 News he has not stepped foot back in downtown New York since 2003 and probably never will. He only hopes his story, and his pictures, help other people remember Sept. 11, 2001.  A day he won't ever be able to forget.

"At this point I don't really want to go downtown. What I will see is not what other people see."

Diventi placed his hand over the photographs.