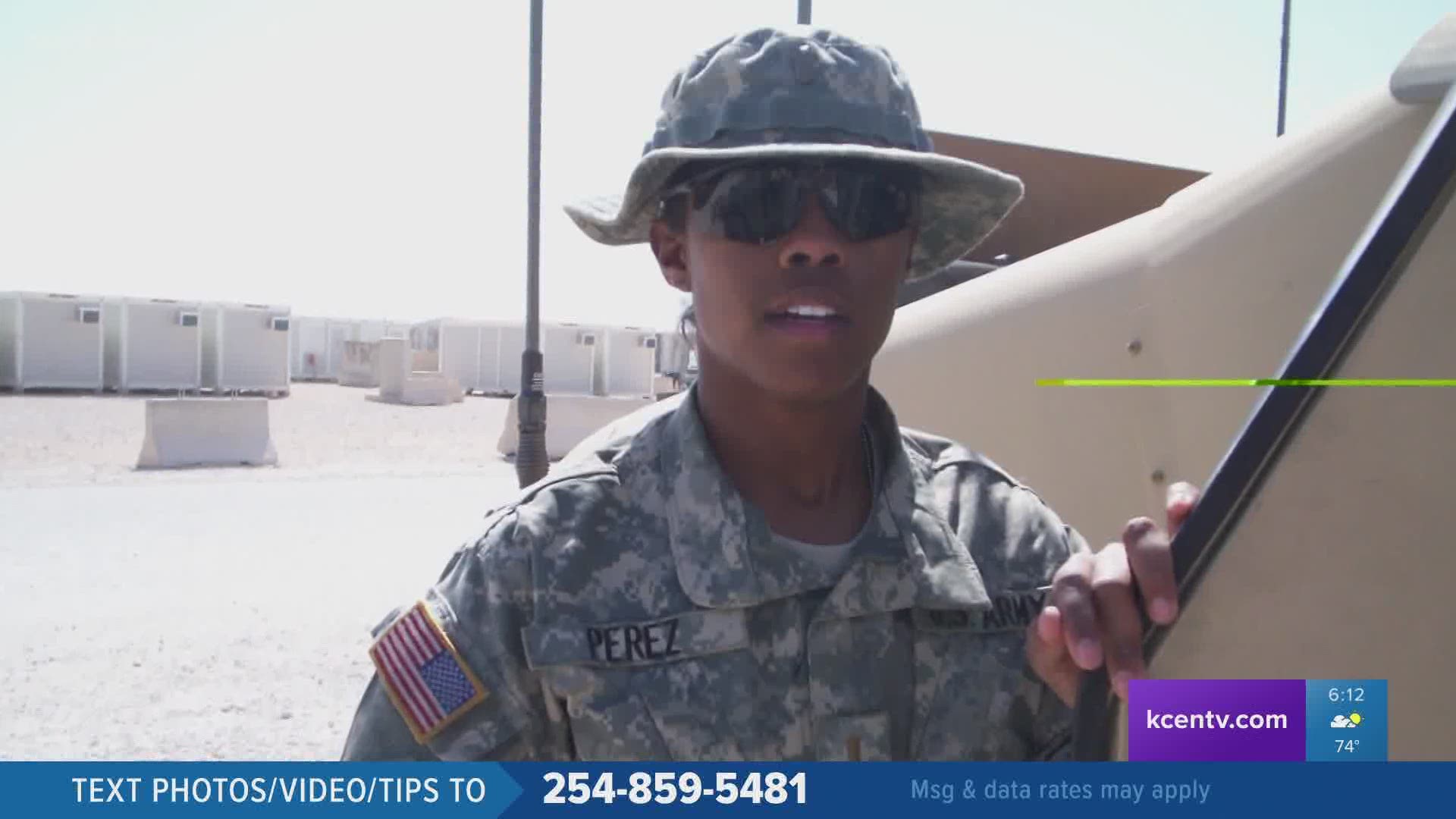 HARKER HEIGHTS, Texas — Daniel and Vicki Perez lost their daughter Emily 14 years ago when she was killed while stationed in Iraq.

"Emily was, she was my baby," Vicki said. "Of course she was the only girl, so she was my favorite daughter."

Emily Jazmin Tatum Perez was born on Saturday, February 19, 1983. Vicki said the moment she brought her home, she knew that her daughter was special.

"You didn't come into Emily's presence and leave the same way," Daniel said. "Emily had a knack, a gift if you will, of making you better than you were before you came to her."

Daniel said Emily was always encouraging and would try to find the best in people.

The Perez's said Emily's whole outlook was to serve people. That was her calling. She always strived to bring out the best in others so she could help them be better than they were.

Daniel served in the United States Military and said the family knew a military way of life. Both parents said Emily had no desire to join herself.

"West Point reached out to her, for what they called the Academic Workshop which is a summer program that they invite kids up for," Daniel said. "They recruited her for academics and also because of athletics because she ran track."

The Perez's said Emily was recruited by multiple schools, including Georgetown, but the program fees were too high. West Point's fees were reasonable so Emily, with no real desire to be in the military herself, decided to give it a shot.

Daniel said he was blown away at the buildings and the architecture at West Point. While he was excited about the look of a prestigious place as the Academy, Emily wanted nothing to do with it.

"Emily looked at me and she said, 'Hey, Dad, it ain't about that. I'm here to get this on my resume so that when colleges see, they can see that I attended the West Point Academic Workshop,'" he said.

Vicki said contrary to all of the stories, Emily was never in ROTC and never had the inclination to join the Army,"

Daniel said after they left Emily there for the week, a few days later she fell while visiting the West Point Museum. She passed out, hit her head and suffered a cut behind her ear that required stitches.

"That evening, we get a phone call from her saying, 'Oh, I like it up here,'" he said. "I don't know if it was the bump on the head, or what it was was, but all of a sudden she wants to go to West Point."

Emily, who was in the summer of her junior year in high school at the time, was late in the game to get the ball rolling on acceptance into West Point, considering the lengthy process for admittance.

"There's an application process that you have got to go through," Daniel said. "You have to catch the eye of your congressman and senators for them to start setting up interviews, etc."

The Perez's said Emily jumped through all the hoops to get there. She wasn't going to let anything stop her from attending West Point, no matter how late in the game she was. She got her interviews and received two nominations for appointment to West Point from Congressman Albert Wynn and from Senator Barbara McCloskey.

Emily enrolled in West Point in the Fall of 2001 and was part of the first class to begin classes after the 9/11 terror attacks in New York City. By the time she graduated in 2005, she held all four of the Major Sergeant positions at the Academy.

Emily deployed for Iraq in December 2005 for her first tour of duty in the war-torn country. On September 16, 2006, she volunteered to ride along on a convoy. An improvised explosive device detonated under her Humvee and she was killed instantly.

"The doorbell rings and there's two people standing there in uniform. A chaplain and an officer," Daniel said. "I knew. I closed the door. You have the wrong house."

He said he went back into his living room and sat down to process what was happening. The uniformed gentlemen at the door were insistent and knocked again,  so he went back and answered the door.

"I already knew, based on opening the door the first time," he said. "It kind of floored me and it kind of bothered me because they broke the news that my child was just killed, 'You want to sign these papers so we can put it out on the media, the newspaper and let everybody else know.'"

Daniel said he told them, 'No,' and refused to sign the papers. He called Vicki to tell her that she needed to come home.

Vicki said she was half-way around the world visiting a girlfriend of hers in Germany. They were on the way back to where they were staying when she said something didn't feel right.

"There seemed to just be this shadow over the car," she said. "It just seemed strange to me but I kept driving"

Vicki said she got back to the house in Germany and the phone rang.

That is when Daniel told Vicki the devastating news.

"He told me that Emily had been killed and, of course, I lost it. But my biggest concern was that I had Pat with me but my husband, my best friend, didn't have anyone home with him," she said.

It has been 5,121 days since Emily was killed while she served her country in Iraq. For a long time, Vicki admits, it was hard to understand why this was God's plan.

"Everything she did, she honored us," Vicki said. "When she was killed, I said, 'Okay, Lord. You said to honor your father and mother and that your days would be long upon this Earth and she did that. So why, why this?'"

Vicki said that it took a while, but once she settled down and God was able to speak and she was able to hear Him, the answer was clear.

"He told me that she doesn't physically have to be here on Earth for her days to be long," she said. "He began to show us shortly thereafter that her days would be long."

In the weeks, months and years that followed Emily's death in Iraq, the Perez's began to learn just how she would live long. That it was through the many people she touched and made a difference in their lives.

The 4th Infantry Division dedicated The Emily Perez Treatment Facility in Emily's honor in Iraq. They learned she was the first African American female officer to die in combat in Iraq.

The Perez's said their daughter is remembered at the Smithsonian Institute with a permanent display of her selfless service and sacrifice. They said Emily's personal military memorabilia is also on display at the National Museum of African American History and Culture in Washington, D.C.

Sunday is Gold Star Mother's and Family's Day. It's a day always observed the last Sunday of every September to honor and recognize those who have lost someone to war.

"Every day is Gold Star for us. Every day Emily is gone. Every day she's thought about," Vicki said. "It's something that you don't want to be a part of and unfortunately, we are."

The Perez's said that Emily having a place where people can learn about her, her sacrifices and the incredible woman she was, gives them peace to know that the world will still know about their daughter after they are gone.

"It's a humbling experience and you get to the point of what's next," Daniel said. "There's always something being done to honor and put her out front."

"Emily would be mortified," Vicki admitted. "That wasn't what she was about at all. She was about touching lives, making a difference and remaining anonymous."

Emily's legacy hangs in all corners of the world and it's one of heroism, patriotism and everlasting friendship. Vicki and Daniel both know, without a doubt, her greatest legacy will always be the love she had for God in all things.

"Know and trust God," Vicki said, as Daniel nodded beside her. "Whoever she met, that's what she would tell them. You can do all things through Christ who strengthens you."

"Do your best and God will do the rest," they both said.

For more information on 'Emily's Way' and to learn more about Emily Perez and her sacrifice, you can visit and follow their Facebook Page.