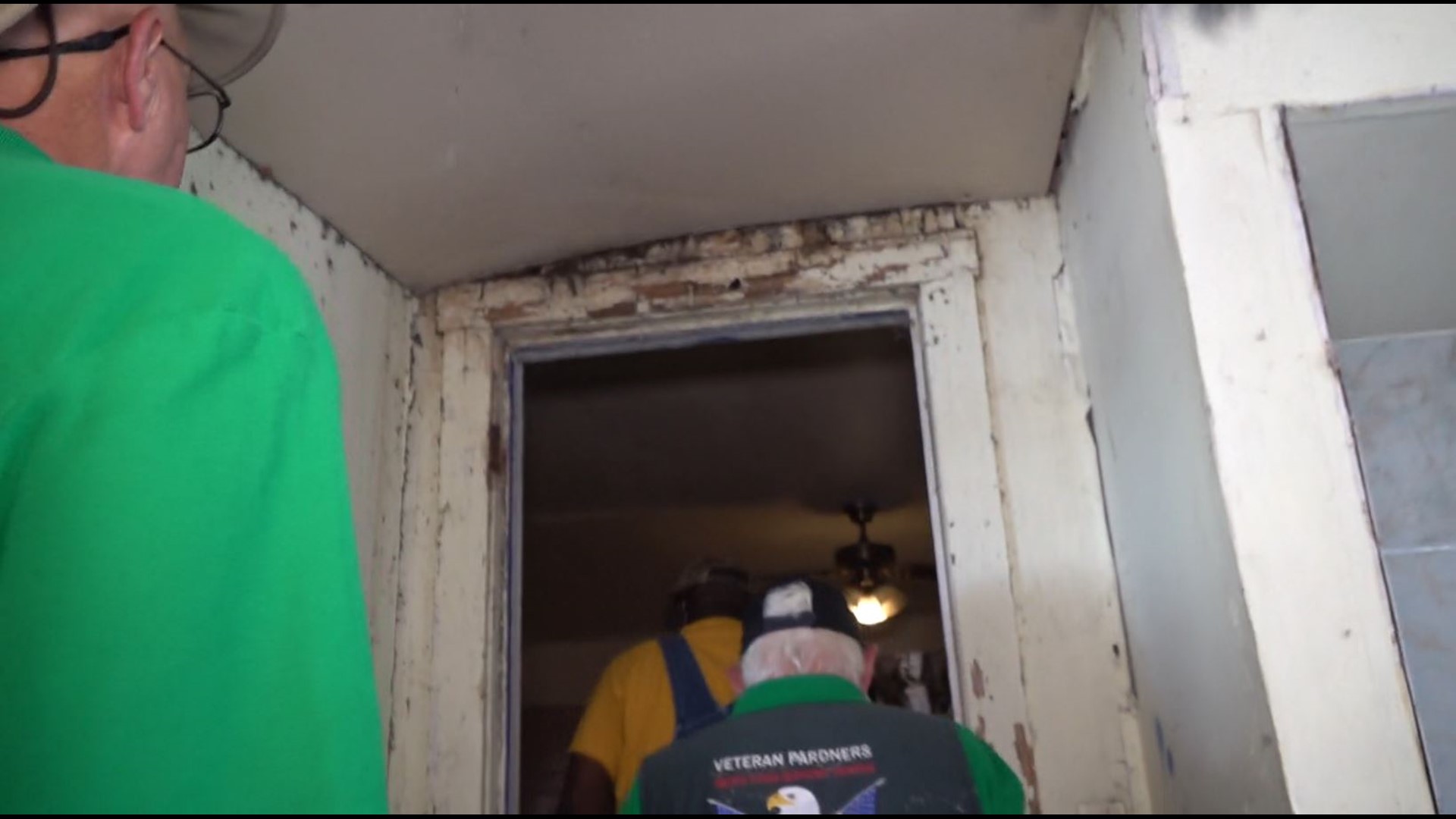 COOLIDGE, Texas — Gerald Henderson is a veteran of our country and recently bought a home in Coolidge so he could move his wife into a more comfortable place, one with warmth in the winter and one that would stay cool in the summer.

"The place I was in, I knew it was bad and I thought that anything would be better," Henderson said. "I was surprised after I opened the door to come in and see that what I thought I would be better was worse than where I was."

Michael Marabella and Wanda Smart, both with Veteran Partners of Texas, a local non-profit organization based in Mexia, walked through the house for the very first time Wednesday morning.

"There are thousands of veterans out here that need help," Marabella said. "They live in places like this in Teague, Mexia, Coolidge, they are everywhere and they need help."

Marabella said that while bigger cities have a lot of organizations to help veterans, there are not many in rural areas like Coolidge.

According to their Facebook page, Veteran Partners of America service the needs of veterans and their families because too many veterans do not qualify for help through the VA. They call themselves the gap assurance many of them need.

Johnson's Roofing installed a new roof on the home last weekend, but the inside is in serious disrepair. The floor is falling and rotted in areas, mold can be seen and smelled throughout and the home needs to re-leveled on its foundation before Henderson can even move in. That's just the beginning.

"He can't afford, like any other veteran on limited income or anybody else on limited income," Marabella said. "You know, this is what he's got and so I'm going to do my best to try and help him rebuild it."

Marabella said it's not a small project and could take upwards of six months or more to complete.

"First off, it's hard for me to believe that somebody actually sold him this house," Marabella said. "Took advantage of him, that's how I feel right there. Somebody took advantage of him because he's old and, I don't know, they may have known he was a veteran and easy prey."

Henderson, 72, said he regrets wholeheartedly that he bought the house on Bell Street sight unseen and wishes he could do it over again. He said he was supposed to be in the house last year.

Marabella said the group is willing to help but as a non-profit organization, they will need the help of others willing to do for a veteran who did so much for our country during his time in the U.S. Air Force.

"You know, this is America. You know Mr. Henderson, veterans, you know, it's a shame to see how they have to live," Marabella said. "It's a crying shame, it really is. We need to treat our veterans better."

Veteran Partners of Texas said they hope that others will step up to help them get Henderson inside his home, even if it takes just one room at a time.

Henderson said he just wants to hold his head high and be proud of a home that is his. But, he admits that he's worried about getting this place move-in ready at all.

"I'm worried about everything," he said. "I want so badly to walk out in my front yard and walk out into my backyard and bring my grandkids and let them be out back and play and be able to look out and make sure they are safe."

Marabella and Veteran of Partners of Texas called on local churches and others to step in and help where they can.

"It doesn't take long, whatever you want to do to help," he said. "Just put a smile on his face, give him hope and that's the biggest thing, give him hope. Give him a dream again."

If you or someone you know can help Veteran Partners of Texas in any way at all, they ask that you contact them via Facebook or you can send an e-mail or call them at (254) 237-9747.