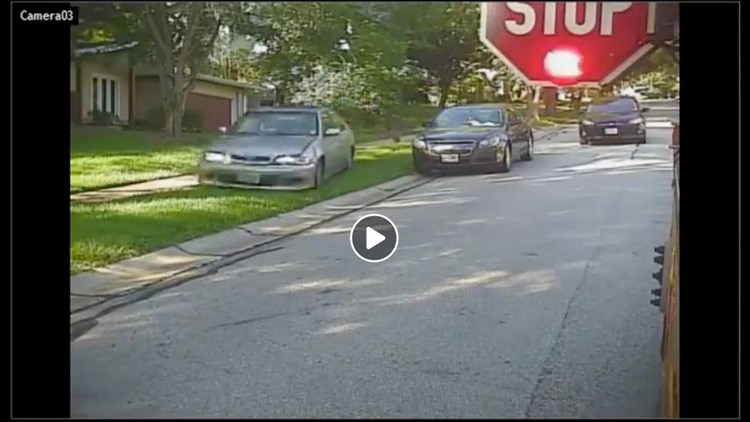 Photo by: Ballwin Police Department, Parkway School District
Video captured a driver swerving into a lawn and speeding past a stopped school bus on Wednesday. Police say they arrested the driver, who has a suspended license and criminal history.

BALLWIN, Mo. – A man has been arrested a day after video appears to show him speeding through a yard and a sidewalk while ignoring a school bus stop arm near an elementary school in Ballwin, Missouri.

Matthew S. McCloskey, 52, was arrested for leaving the scene of an accident, driving while suspended and violation of a school bus stop sign.

The incident happened in a residential community around 8:25 a.m. Wednesday as children were boarding the bus.

“I think I did a pretty good job of not killing anyone,” McCloskey told St. Louis' KSDK in an exclusive interview.

McCloskey claimed that the brakes on the car he borrowed to get to an appointment failed, forcing him to take an erratic route to avoid crashing.

The Parkway School District posted video of the wild encounter on social media. In the clip, it sounds like students were on board the bus at the time, traveling near an elementary school in the district.

"If kids were coming towards the bus from these houses, it could have been tragic," the district said in the post.

But McCloskey contends the video doesn’t capture what really happened.

“Everyone is acting like I was trying to avoid the stop sign on the bus, but my freaking brakes went out,” he said.

McCloskey said he tried to return to the scene once he got the car stopped, but said the bus was gone by then. He also admitted he never tried to explain himself to police once the video went viral because he knew he’d be in trouble.

KSDK has learned the registered sex offender wasn’t even supposed to be behind the wheel in the first place. McCloskey has 15 open traffic cases on his record and was driving on a suspended license at the time.

When pressed about why he got behind the wheel, McCloskey defended his actions by making it sound like it wasn’t a big deal.

“Do you know how many people drive on a suspended license?” he asked.

McCloskey has several criminal convictions on his record, including attempted robbery and attempted rape.

KSDK also spoke exclusively with McCloskey’s estranged wife, Peggy Sue, who described herself as a local teacher. She said the two haven’t lived together in more than a year.

She said she saw the video online, but only learned Thursday about who was driving.