In the Scooter Wars of 2018, it's not really about the scooters

In the Scooter Wars of 2018, it's not really about the scooters 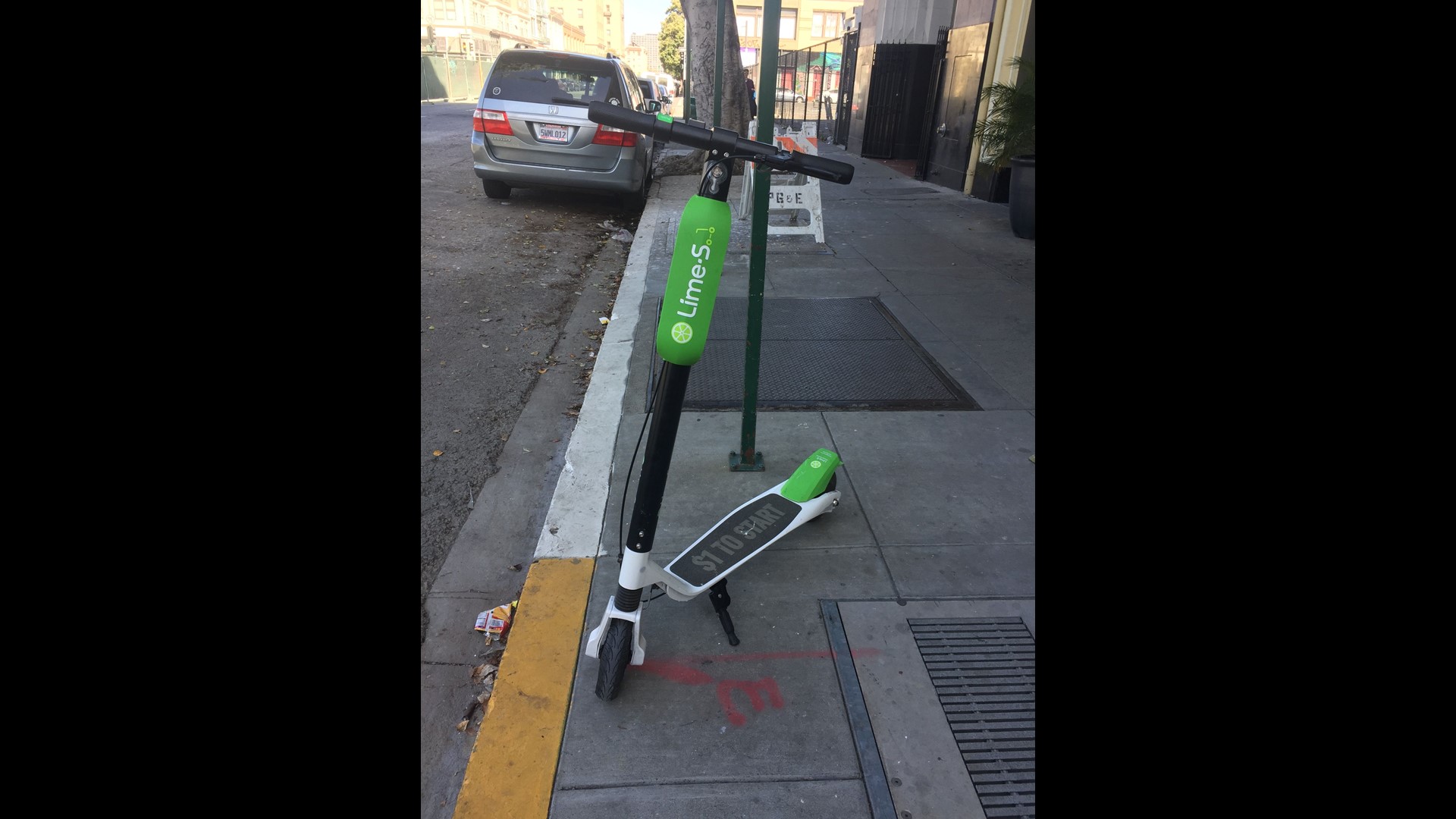 SAN FRANCISCO – There’s one thing the aggrieved voices in this city’s Great Scooter War of 2018 can agree on: It’s not really about the scooters.

In three short months, these electric-powered gizmos that promise freedom from urban gridlock have become symbols in a larger struggle over the way the technology boom here has made the region one of the nation's wealthiest and least affordable.

That tension often stems directly from the way startups treat this city as their personal petri dish, leveraging its infrastructure and citizens to disrupt established businesses while making a mint in the process.

Their corporate leaders say they're providing a quick and easy mode of transportation that doesn't pollute the air and helps take cars off the streets.

But for every every happy hipster zipping past snarled traffic on an app-connected Lime, Bird or Spin scooter, there's someone else who sees that commuter as a reminder of the role upwardly mobile tech workers have played in changing the face of a once bohemian enclave where the median house price now is $1.6 million.

"This is a political backlash against what is perceived to be, rightly or wrongly, a very arrogant gilded age-style approach toward public space by tech companies,” says Jason Henderson, San Francisco State University professor and author of "Street Fight: The Politics of Mobility in San Francisco."

That's why after a March rollout that initially seemed to delight, the rentable devices that generally charge $1 to unlock, 15 cents per minute of use, quickly became a lightning rod.

The hashtag #scootersbehavingbadly trended, accompanied by photos of the offenders strewn about sidewalks like neglected toys. Out of spite, some scooters even were flung into trash cans, trees and the bay, smeared with feces or slapped with stickers covering the codes that allow riders to unlock them.

After receiving swelling complaints to a hotline, city officials decided to pull all the scooters on June 4. Pending regulations, they are likely to bring them back in July in a pilot program of up to 2,500 scooters split between five companies.

Credit: Richard Jacobsen, AP
A group of activists block commuter tech buses in the Mission District with motorized scooters during a protest in San Francisco on Thursday.

San Francisco supervisor Aaron Peskin calls scooters "symbolic of the tech arrogance we’ve been dealing with for years," while housing activist Laura Clark of YIMBY Action declares "we’re fighting for the soul of our city, and that’s about housing, not scooters.”

In the process of leaning on a tech dictum that prioritizes asking for forgiveness rather than permission, tech companies often rile up city officials, activists and citizens.

Flare-ups between residents and techies have always generated protests, and in a telling piece of political theater, activists recently used a pile of scooters to block a Google bus.

The novelty of the scooter phenomenon is partly what caused people to gripe, says Euwyn Poon, Spin’s co-founder and president. “But this isn’t tech for tech’s sake," he says. "Mobility is a universal product.”

Credit: Ashley Wong/USA Today
A Lime scooter waits for a rider in Oakland.

Caen Contee, co-founder of Lime, adds that profit motives aside, the aim is to help cities deal with growing congestion issues. “We’ve always known this is a passionate space that touches on issues of urbanization and gentrification,” he says. "So while we may use tech in the scooters, our business has a larger mission.”

Representatives of all the major scooter companies stressed in interviews that they met with city officials here ahead of launch. Most were keen to start small, testing the concept in limited locations. But suddenly there was a rush to market when some companies decided to act first and negotiate later.

One company, Skip, deliberately held out when it heard San Francisco was going to consider regulations, a move executives hope will win them points with socially conscious riders when scooters return.

"Some of what we were seeing (with rivals) seemed out of the old Uber playbook" of starting operations and then battling cities, says Darren Weingard, head of government relations for Skip Scooters. "We didn't want to follow that."

If you think scooters might be going away because of the hubbub, think again.

They've amassed these towering sums by pitching an eco-friendly solution to "last-mile problems," which refer to short distances commuters face that may not be well served by hopping into a car – the very solution initially offered by Uber and Lyft, which also have submitted applications for San Francisco scooter permits.

What San Francisco officials want isn't so much to get rid of scooters, but rather to have more of a handle on how they proliferate and operate.

"If this is a good last-mile solution, it should be on our terms, not theirs," says city supervisor Peskin, echoing the feelings of his peers in cities from coast to coast.

Across the country, reactions to the scooter invasion have followed a familiar pattern that includes quick adoption by some residents who love the convenience and hastily scrambled meetings by officials who worry about scooter chaos.

In Santa Monica, where tense relations between Bird and city officials led to a $300,000 fine, city council members recently hammered out scooter rules covering maintenance of the devices, education of riders and data sharing on the part of companies.

In Austin, officials have kicked off a permit-based pilot program that requires scooter companies to carry insurance and encourages scooter riders to leave the devices at bike racks instead of scattered along sidewalks. In Denver, city officials are busy writing regulations and are impounding scooters found creating a public nuisance.

But for some frustrated by the scooter onslaught, fighting technology and Silicon Valley’s insistent creep into our lives is what the scooter battle is really about.

Without being consulted on their deployment and use, San Francisco pedestrians this spring suddenly were tripping on scooters being left haphazardly on sidewalks or were forced to dodge people buzzing along at up to 15 miles per hour.

That frustration was only amplified given the increased public scrutiny of tech companies such as Facebook and Google over data privacy issues.

“Society is showing signs of suffering from innovation overload,” tech industry futurist Paul Saffo says. “On the one hand, people are fascinated by novelty, and on the other hand for some it’s just getting to be too much.”

But a whiplash reaction to scooters by lawmakers risks torpedoing what could be a viable solution for cities looking to lure employees with sensible commutes, says Matt Brezina, a San Francisco bike safety advocate and tech investor with a stake in Spin.

“Cities have to think about if they overregulate this. What do they want more of, more people on scooters or more people in cars?” Brezina says. “They need to give technology a fighting chance against the car.”

San Franciscan Alex Ritchey exemplifies that duality. The tech worker loves scootering to work past this city's iconic Ferry Building on his personal sleek all-black ride he purchased about a month ago.

“This scooter has changed my commute from spending $10 a day on Uber on a 40-minute ride to zipping along on this for 20 minutes,” says Ritchey, who works at tech company Hearsay.

But, he adds, “I’ve seen so many people who are so reckless on these things, like three people riding on a scooter or people texting while riding a scooter.”

Like many locals, Ritchey loves having access to an alternative, low-cost, green way to commute, but he’s not thrilled about the way the two-wheeled scooter revolution has come to town.