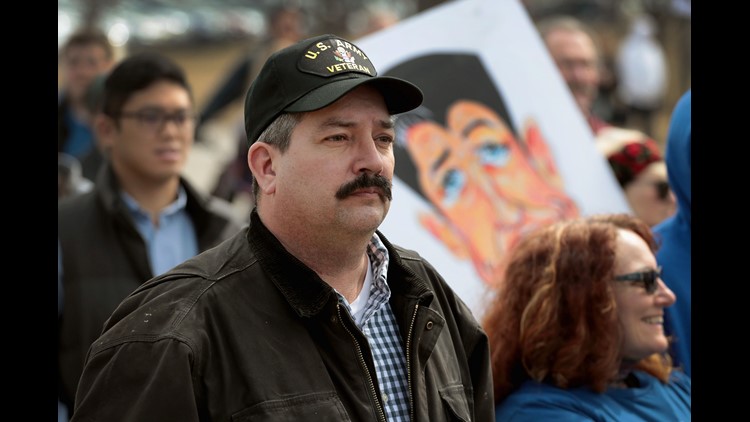 Photo by: Getty Images
Randy Bryce joins other residents at a rally to show support for students who finished the last leg of a 50-mile march through Wisconsin in the hometown of House Speaker Paul Ryan to call attention to gun violence on March 28, 2018, in Janesville, Wisconsin.

In Minnesota, former GOP Gov. Tim Pawlenty lost his bid to get his old job back. And Vermont Democrats nominated the nation's first transgender gubernatorial candidate from a major political party.

Here's a look at results from Tuesday's primary contests in Wisconsin, Minnesota, Connecticut and Vermont, where voters cast ballots for House, Senate and gubernatorial races:

Bryce, a U.S. Army veteran, significantly outraised his opponent, Janesville School Board Member Cathy Myers, and is financially well-positioned to compete for Ryan's seat in November.

He faces Ryan's former staffer, University of Wisconsin regent Bryan Steil, who won the GOP primary. He is an attorney for a manufacturing company.

But Bryce's history of arrests, including operating a vehicle under the influence of alcohol in 1998, could be problematic. Myers also filed a Federal Election Commission complaint against him, claiming he converted campaign funds to personal use.

Republicans were eager to pounce on Bryce's record.

NRCC Statement on #WI01: "You’d need a Boeing 747 to fit all of the baggage Randy Bryce is carrying into November."https://t.co/Z06vunXeGm pic.twitter.com/C5xc7lRdWf

Evers told the Associated Press that he will "take the fight to Walker," attacking him on his record while talking about issues Wisconsin voters care about, including education and jobs.

In another Wisconsin race that drew attention, state Sen. Leah Vukmir defeated Marine Corps veteran and first-time candidate Kevin Nicholson in an intense GOP Senate primary battle. Vukmir will take on Democratic Sen. Tammy Baldwin, who is favored to win in the fall. In nominating Vukmir, GOP voters looked past a video from 2016 that recently emerged showing her bashing the president as “offensive to everyone.”

Republican U.S. Senate candidates Kevin Nicholson and Leah Vukmir stand at their podiums at the start of a debate at the University of Wisconsin-Milwaukee Thursday.
Tyger Williams / Milwaukee Journal Sentinel

Vukmir was the establishment favorite endorsed by the state party, while Nicholson portrayed himself as a conservative outsider. He was endorsed by conservative organizations, including Club for Growth, though he was once a rising star in the Democratic Party.

The race to replace retiring Democratic Gov. Mark Dayton in November is a toss-up, analysts say, in a state former Democratic presidential candidate Hillary Clinton won by only 1.5 percentage points.

In the GOP primary, County Commissioner Jeff Johnson defeated former Gov. Tim Pawlenty, denying him a shot at the job he left in 2011. Pawlenty was favored to win, but Johnson positioned himself as the more conservative choice.  He attacked Pawlenty for calling then-candidate Donald Trump "unhinged and unfit" in 2016, even though Johnson back then called Trump a "jackass."

Walz and Rep. Rick Nolan left open two of Democrats’ most vulnerable seats in the country – each voted for Trump – to run for statewide office.

State Rep. Ilhan Omar won the Democratic nomination to compete for a safe blue district in Minneapolis being vacated by Rep. Keith Ellison, who is running for state attorney general and won his primary.  If she wins in November, Omar, who once lived in a Kenyan refugee camp, would become the first Somali-American in the House.

Sen. Tina Smith, who was appointed to fill a vacancy left by Sen. Al Franken, defeated a high-profile special election challenger in Richard Painter, a former ethics lawyer in the George W. Bush White House who left the GOP and has become a hero to the resistance as a frequent Trump critic. She will face state Sen. Karin Housley, who is married to NHL's Buffalo Sabres Head Coach Phil Housley, in November.

Retiring Democratic Gov. Dan Malloy’s deep unpopularity gives Republicans a shot at the governor’s mansion in this blue state for the first time in eight years.

The GOP nod went to political newcomer Bob Stefanowski, a former GE executive who dubbed himself Bob the Rebuilder, in an upset. Stefanowski, who wants to eliminate the personal income tax, defeated the state party's endorsed candidate, Danbury Mayor Mark Boughton, and three others.

Stefanowski will face Democrat Ned Lamont, a businessman and 2010 gubernatorial candidate. Lamont won his primary against Bridgeport Mayor Joe Ganim, who made a political comeback after serving time in prison for corruption charges during an earlier stint in elected office.

A scandal opened up the state’s most competitive House district in April, when Rep. Elizabeth Esty announced she would not seek re-election amid mounting criticism for her delay in firing a chief of staff accused of sexually harassing a woman in her office.

Still, the congressional delegation's all-Democratic makeup isn’t expected to change this cycle. Political newcomer Jahana Hayes, who was the 2016 National Teacher of the Year, defeated former Simsbury First Selectman Mary Glassman in a two-way Democratic primary for this seat.

National Teacher of the Year Jahana Hayes of John F. Kennedy High School in Waterbury, Conn., takes the stage with President Barack Obama and her fellow state teachers of the year during a ceremony in the East Room of the White House May 3, 2016, in Washington, D.C.
Getty Images

While Glassman touted her experience and had the party’s convention endorsement, Hayes was encouraged to run by Sen. Chris Murphy, D-Conn., and has the endorsement of Sen. Kamala Harris, D-Calif. If she wins in November, Hayes will be the state’s first black Democrat and first black woman elected to Congress.

Her GOP opponent is Manny Santos, the former mayor of Meriden.

Murphy will face small-business owner Matthew Corey, a three-time congressional candidate, in the fall, but he is expected to retain his seat.

Sen. Bernie Sanders, I-Vt., responds to a question during a town hall meeting in Jackson, Miss., on April 4, 2018.
AP

Hallquist, a former utility CEO, defeated three other Democrats in her primary. She now faces Gov. Phil Scott, a Republican, who is seeking his second term.

Sen. Bernie Sanders, the longest-serving independent in Congress, won the state's Democratic primary but he is expected to turn down the nomination and run as an independent, as he has done in the past.

His potential GOP opponents are unlikely to make headway against Sanders, who won his last election with 71 percent of the vote. Sanders, who ran in the Democratic primary for president in 2016, is now running for his third Senate term.