In red and blue states, the discussion over how to teach sex education includes whether schools should help kids understand consent. 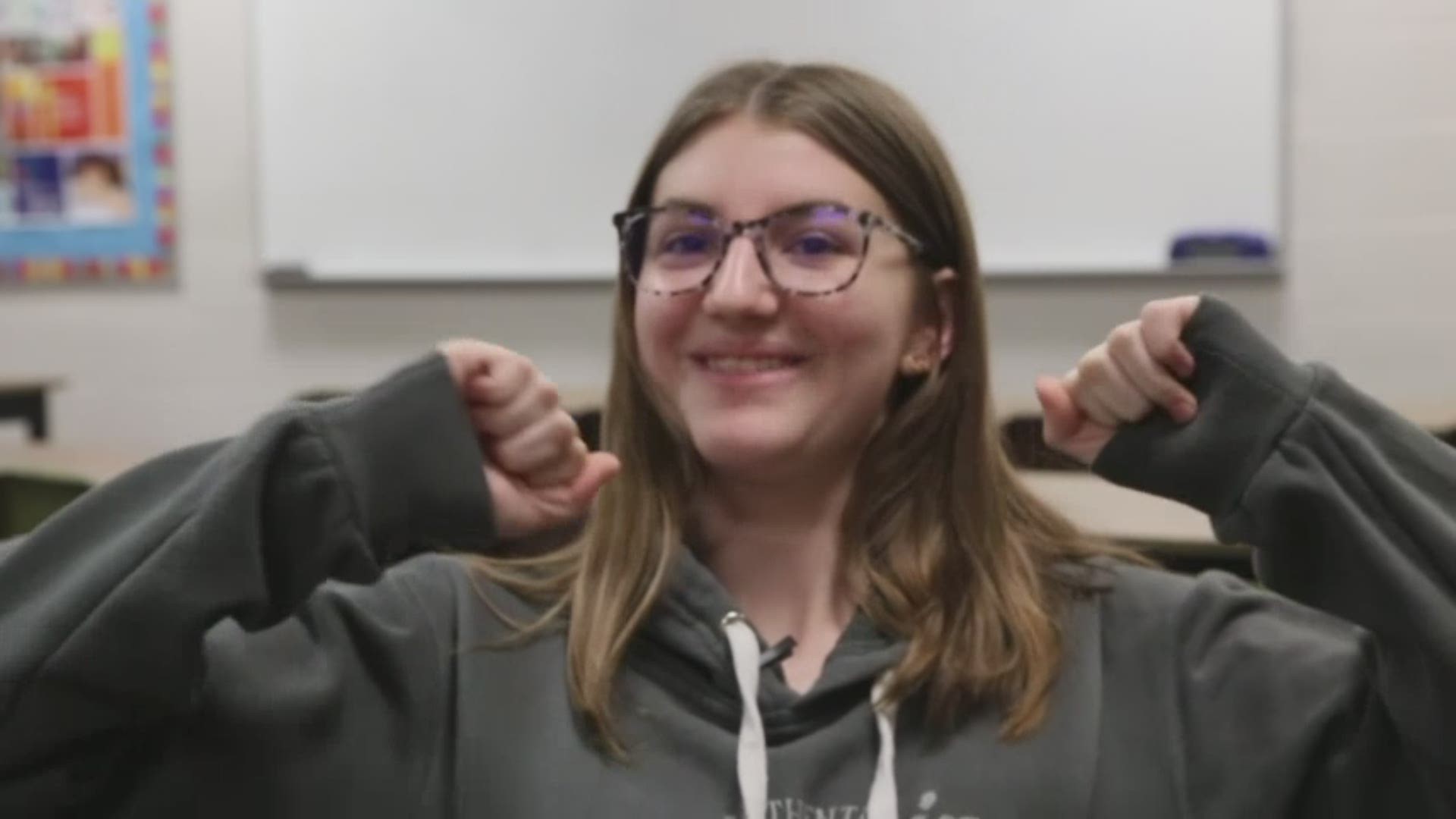 Inside a Catholic school in Portland, Oregon, high school sophomores break into groups to discuss some once-taboo topics: abusive relationships and consent.

At one desk, a girl with banana-colored fingernails begins jotting down some of the hallmarks of abuse: Physically hurting you, verbally abusive, can be one-sided. She pauses to seek input from her classmates, boys and girls alike, before continuing: "It messes up your mentality and your, like, confidence."

For the first time this year, Central Catholic High School, like public schools in the city, is using educators from a domestic violence shelter to teach kids about what it means to consent. The goal is to reduce sexual violence and harassment among teens and help them understand what behavior is acceptable — and what's not — before they reach adulthood.

"We're talking about dating violence, sexual assault, relationships, #MeToo — all of those things. I think you have to be intentional about bringing this program into our classrooms," says David Blue, the school's director of diversity and inclusion. "How do you look at all of these constant conversations in our society right now?"

What's happening at this Catholic school in liberal Portland represents a larger debate unfolding in blue states and red, as lawmakers, educators and teens themselves re-examine whether sex education should evolve to better address some of the issues raised by #MeToo. Central to the conversation is whether schools should expand curriculums to help kids understand consent — a concept often defined differently from state to state.

"#MeToo has brought the issue of consent into the national spotlight, but it's abundantly clear that people still struggle with the culture shift that's happening," said Jennifer Driver, state policy director of the Sexuality Information and Education Council of the United States, which favors liberal sex ed policies. "When done right, sex education can serve as violence prevention. But first, we have to get these policies (enacted)."

Since January, dozens of new sex ed bills have been floated in statehouses, but only five have passed and just two of those require specific instruction about consent, according to the Guttmacher Institute, which tracks sexuality and reproductive health issues. In all, 10 states and the District of Columbia require that consent be part of sex ed curriculum. The states are: California, Connecticut, Maryland, New Jersey, Illinois, Oregon, Rhode Island, South Carolina, Vermont and Virginia.

Meantime, according to Driver's group, 32 states require that abstinence be stressed in schools that teach sex education. And most federal funding for sex ed in recent years has gone to abstinence programs, to the tune of $2 billion since 1981.

The divide over how to teach sex ed has long split on the question of whether kids are "sexual beings," said Jonathan Zimmerman, an education professor at the University of Pennsylvania.

The pendulum has swung from the explicit information on sex, contraception and sexually transmitted diseases taught amid the AIDS epidemic in the 1980s and 1990s to the abstinence-focused agenda that followed the rise of conservative politics, especially in the Bible Belt.

With the #MeToo movement, the pendulum may be inching back, at least when it comes to efforts to curb sexual violence.

A few abstinence-focused states, such as Virginia and South Carolina, have added consent to the curriculum.

And Oklahoma lawmakers this year considered a bill that would have forced high schools to teach consent. Called "Lauren's Law," the measure was named for a teen who said she was raped at a high school party. The Legislature eventually passed a narrower measure requiring that schools with a sex ed curriculum incorporate teaching about consent. It leaves other districts of the hook, but state Sen. Carol Bush, the Republican sponsor, called it "baby steps."

Bush said she raised two daughters in a Christian home but that a background in public health taught her of the need for comprehensive sex ed programs.

"I hate that we call it sex ed. It's more that you're a valued person — boy or girl — and we need to help our children understand that," said Bush, adding the bill was palatable to conservative colleagues because it lets teens know they have the right to say "no" to sex. She believes an increase in the number of women and younger lawmakers this year helped build consensus.

As with most issues in education, local school districts play a big role in shaping sex education curriculum, and many state laws on sex ed are intentionally vague.

In Cadillac, Michigan, a reliably Republican town of about 10,500 people, school leaders proactively teach consent after the school board voted more than a decade ago to change its sex ed curriculum from "abstinence only" to "abstinence based." These days county prosecutor Jason Elmore regularly visits the town's high school to deliver a sometimes startling message about consent.

Speaking to a freshmen health class last month, he patted his chest, lower abdomen and inner thighs while explaining that anyone under 16 cannot engage in sexual contact there without committing a crime — "even if it's a boyfriend or a girlfriend."

Elmore let the concept of who can do what with whom sink in as the students sat silently. Then he explained what it means for sexual contact to be "freely and honestly given" and how alcohol and marijuana are often involved in cases he sees. In the past year alone, he told the class, he's prosecuted a half-dozen sex-related cases involving Cadillac students.

"In this school?!" one bewildered boy exclaimed.

Health teacher Cathy Booher believes more students today understand what it means to give consent and respect boundaries. But inevitably, not long after Elmore's class, she said: "A week or two later, we've had an incident."

In Tennessee, where the state mandates an abstinence-based curriculum, some teenagers are leading their own discussions about consent. The state's sex ed law, known as the 2012 "Gateway Law," not only prohibits the discussion of sexual activities that stop short of intercourse — so-called "gateway sexual behaviors" — it imposes $500 fines on instructors who wade into the topic.

In Memphis, students who are part of the advocacy group Memphis Against Sexual Harassment and Assault have lobbied the school district to fill its Title IX director's job, conducted peer training on consent, organized "Survivor Power Coffee Hours," and taken part in a "Memphis Says No More" poster campaign designed to promote awareness about sexual harassment and violence. The school board has agreed to distribute the posters in all middle and high schools this fall, the teens said.

These issues are personal to youth leaders Devin Dearmore and Savanah Thompson. Dearmore, 18, said she was sexually harassed by a staff member before transferring high schools. Thompson, 15, said she was catcalled, groped, pinned against a locker by another student — and later blamed for it — in eighth grade.

"I think there's this thing in the South that you just don't talk about things — provocative things," Thompson said. "We're being taught all of these things preparing us for college . but they're not teaching you how to cope with things that can derail your life. ... That's where our school system — and school systems nationwide — have failed us. In middle and elementary school, I didn't know I could say no."

Some who oppose teaching consent believe it signals an approval of teen sexual activity.

Mary Anne Mosack, who runs an abstinence education group called Ascend, said her group has been talking about consent for years but in the context that "avoiding sex is your best option." Ascend has trained some 1,500 instructors to teach what it calls "sexual risk aversion" in public and private schools, clubs, foster homes and more.

Measures like Tennessee's "Gateway Law" are not meant to chill discussion on important issues, Mosack said, but to limit those that stray too far into supposed safe-sex topics such as "naked cuddling" and "showering together."

"In Tennessee and in other states, too, people were looking at those kinds of topics that were being presented, and felt they were inappropriate," she said.

Critics of abstinence-based programs say they shut down urgently needed conversations. And if they are meant to curtail sexual activity in places like Tennessee, the results appear questionable. A study last month in the Journal of the American Medical Association found that Memphis was first among 17 metro areas surveyed in the rate of boys engaged in preteen sex. The survey found 1 in 4 boys have sex before their 13th birthday.

As for teaching students to delay sex until marriage, Columbia University researcher John Santilli considers that unreasonable in a country where just 3 percent of people do so.

"Abstinence until marriage in America in 2019? It's an impossible goal," said Santilli, who studies pediatrics and population health and said that more than half of Americans have sex before leaving high school. "On the other hand, I think we ought to tell young people if they're not ready to have sex with people, if they've had too much to drink, if they somehow feel uncomfortable with somebody, they can say no. To me, that's feminism in action."

He led a recent study that found teaching "refusal skills" in high school can cut the chances someone is raped in college in half.

"We're trying to do our best to follow the teachings and at the same time be realistic, because as a school you lose your relevance real quickly if you're not real," Garrow said.

In the sophomore wellness class in April, two Raphael House instructors asked students to consider signs of healthy and unhealthy relationships. Does your partner make you feel valued? Stupid? Scared?

"It, like, opened my eyes," said Ramaya Wright, 15. "I didn't know those are a lot of the signs of an abusive relationship."

Julia Tycer, a Raphael House educator, said consent comes into play not just in dating relationships but in all of our interactions, every day.

"It's never really too early to be talking about consent," she said. "Practicing consent is really just asking, 'Are you OK?'"

Contributing were AP reporter Gillian Flaccus from Portland, Oregon, and AP National Writer Martha Irvine from Cadillac, Michigan. Dale, who reported from Philadelphia, writes about gender issues and #MeToo for The Associated Press. Follow her at https://twitter.com/Maryclairedale