Supreme Court nominee Amy Coney Barrett told senators she would bring no “agenda” to the court, batting back questions on abortion, gun rights and other issues. 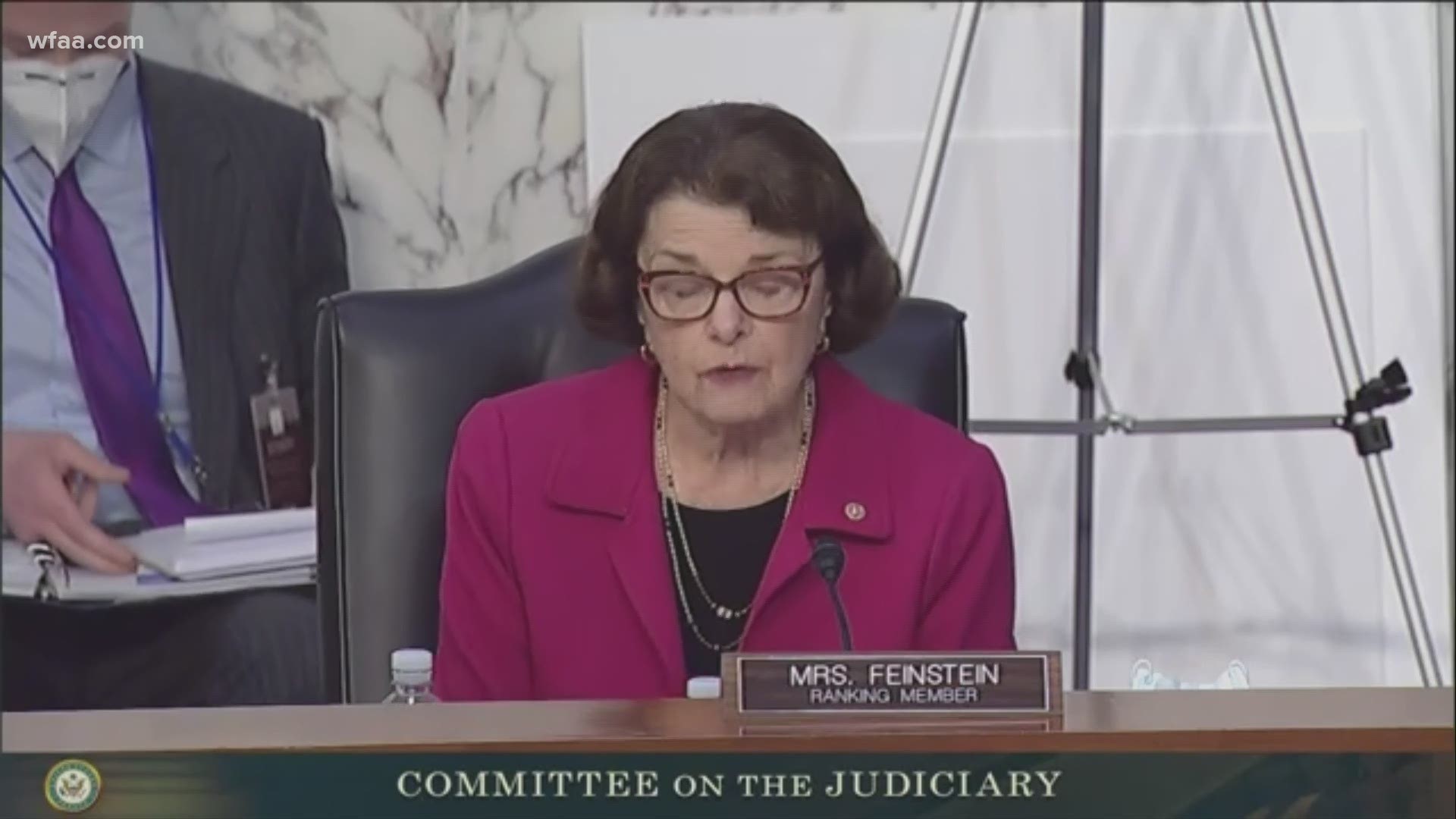 WASHINGTON — Supreme Court nominee Amy Coney Barrett batted away Democrats’ skeptical questions Tuesday on abortion, health care and a possible disputed-election fight over transferring presidential power, insisting in a long and lively confirmation hearing she would bring no personal agenda to the court but decide cases “as they come.”

The 48-year-old appellate court judge declared her conservative views with often colloquial language, but refused many specifics. She declined to say whether she would recuse herself from any election-related cases involving President Donald Trump, who nominated her to fill the seat of the late Justice Ruth Bader Ginsburg and is pressing to have her confirmed before the the Nov. 3 election.

“Judges can’t just wake up one day and say I have an agenda — I like guns, I hate guns, I like abortion, I hate abortion — and walk in like a royal queen and impose their will on the world,” Barrett told the Senate Judiciary Committee during its second day of hearings.

Barrett returned to a Capitol Hill mostly locked down with COVID-19 protocols, the mood quickly shifting to a more confrontational tone from opening day. She was grilled by Democrats strongly opposed to Trump’s nominee yet unable to stop her. Excited by the prospect of a judge aligned with the late Antonin Scalia, Trump's Republican allies are rushing ahead to install a 6-3 conservative court majority for years to come.

The president seemed pleased with her performance. “I think Amy’s doing incredibly well,” he said at the White House departing for a campaign rally.

Trump has said he wants a justice seated for any disputes arising from his heated election with Democrat Joe Biden, but Barret testified she has not spoken to Trump or his team about election cases. Pressed by panel Democrats, she skipped past questions about ensuring the date of the election or preventing voter intimidation, both set in federal law, and the peaceful transfer of presidential power. She declined to commit to recusing herself from any post-election cases without first consulting the other justices.

“I can’t offer an opinion on recusal without short-circuiting that entire process,” she said.

A frustrated Sen. Dianne Feinstein, the top Democrat on the panel, all but implored the nominee to be more specific about how she would handle landmark abortion cases, including Roe v. Wade and the follow-up Pennsylvania case Planned Parenthood v. Casey, which confirmed it in large part.

“It’s distressing not to get a good answer,” Feinstein told the judge.

She later declined to characterize the Roe v. Wade decision that legalized abortion as a “super-precedent” that must not be overturned.

Democrats had no such reticence.

Let’s not make any mistake about it,” said California Sen. Kamala Harris, the Democratic vice presidential nominee, appearing remotely due to COVID concerns as the hearing pushed into the evening.

Allowing Trump to fill the seat with Barrett “poses a threat to safe and legal abortion in our country," Harris said.

The committee chairman, Republican Lindsey Graham of South Carolina, opened the day-long session under coronavirus protocols that kept it off limits to in-person attendance by members of the public.

Republicans have been focused on defending Barrett and her Catholic faith against possible criticism concerning issues such as abortion and same-sex marriage, and Graham asked if she would be able to shelve her personal beliefs to adhere to law.

He said, “I will do everything I can to make sure that you have a seat at the table. And that table is the Supreme Court."

The Senate, led by Trump’s Republican allies, is pushing Barrett’s nomination to a quick vote before Nov. 3, and ahead of the latest challenge to the “Obamacare” Affordable Care Act, which the Supreme Court is to hear a week after the election. Democrats warn that she would be a vote to undo the law and strip health coverage from millions of Americans.

"I'm not hostile to the ACA,” Barrett told the senators. She distanced herself from her past writings perceived as critical of the Obama-era health care law, saying those pieces were not addressing specific aspects of the law as she would if confirmed to the court. "I'm not here on a mission to destroy the Affordable Care Act.”

She appeared stumped when Sen. Patrick Leahy, D-Vt., tried to put her on the spot about several details of the health care law's effects. She could not recite specifics, including that 23 million people are covered by the law or that more than 2 million young people are on their parents' health insurance.

The Indiana judge, accompanied by her family, described herself as taking a conservative, originalist approach to the Constitution. A former law professor, she told the senators that while she admires Scalia, her conservative mentor for whom she once clerked, she would bring her own approach.

Senators probed her views on gun ownership, gay marriage and racial equity, at one point drawing an emotional response from the mother of seven, whose children include two adopted from Haiti, as she described watching the video of the death of George Floyd at the hands of police.

“Racism persists," she said, adding that Floyd's death had a “very personal” effect on her family and that she and her children wept over it. But she told Sen. Dick Durbin, D-Ill., that "making broader diagnoses about the problem of racism is kind of beyond what I’m capable of doing as a judge.”

Republicans were thrilled when she held up a blank notebook, apparently showing she had been fielding questions without aid.

Overall, Barrett's conservative views are at odds with the late Ginsburg, the liberal icon.

While Ginsburg testified at her 1993 confirmation hearing that the decision to have a child is one a woman “must make for herself,” Barrett says as a judge she must reserve opinions, despite having made her anti-abortion views known before joining the bench.

“You would be the polar opposite of Justice Ginsburg,” said Sen. Amy Klobuchar, D-Minn.

Barring a dramatic development, Republicans appear to have the votes to confirm Barrett to a lifetime seat on the Supreme Court, and they spent their time portraying her as a thoughtful judge with impeccable credentials. She would be Trump's third justice.

Underscoring the Republicans’ confidence, Graham set an initial committee vote on the nomination for Thursday, the last day of hearings, which would allow final approval by the full Senate by the end of the month.

Protesters rallied outside the Senate building, unable to come inside the hearing room.

Other issues aside, Democrats are outraged that Republicans are moving so quickly, having refused to consider President Barack Obama's nominee after Scalia's death in February 2016, well before that year's election.