Macron said the U.S. supported the initiative, although he acknowledged that U.S. President Donald Trump had skipped Monday's working session on the environment. 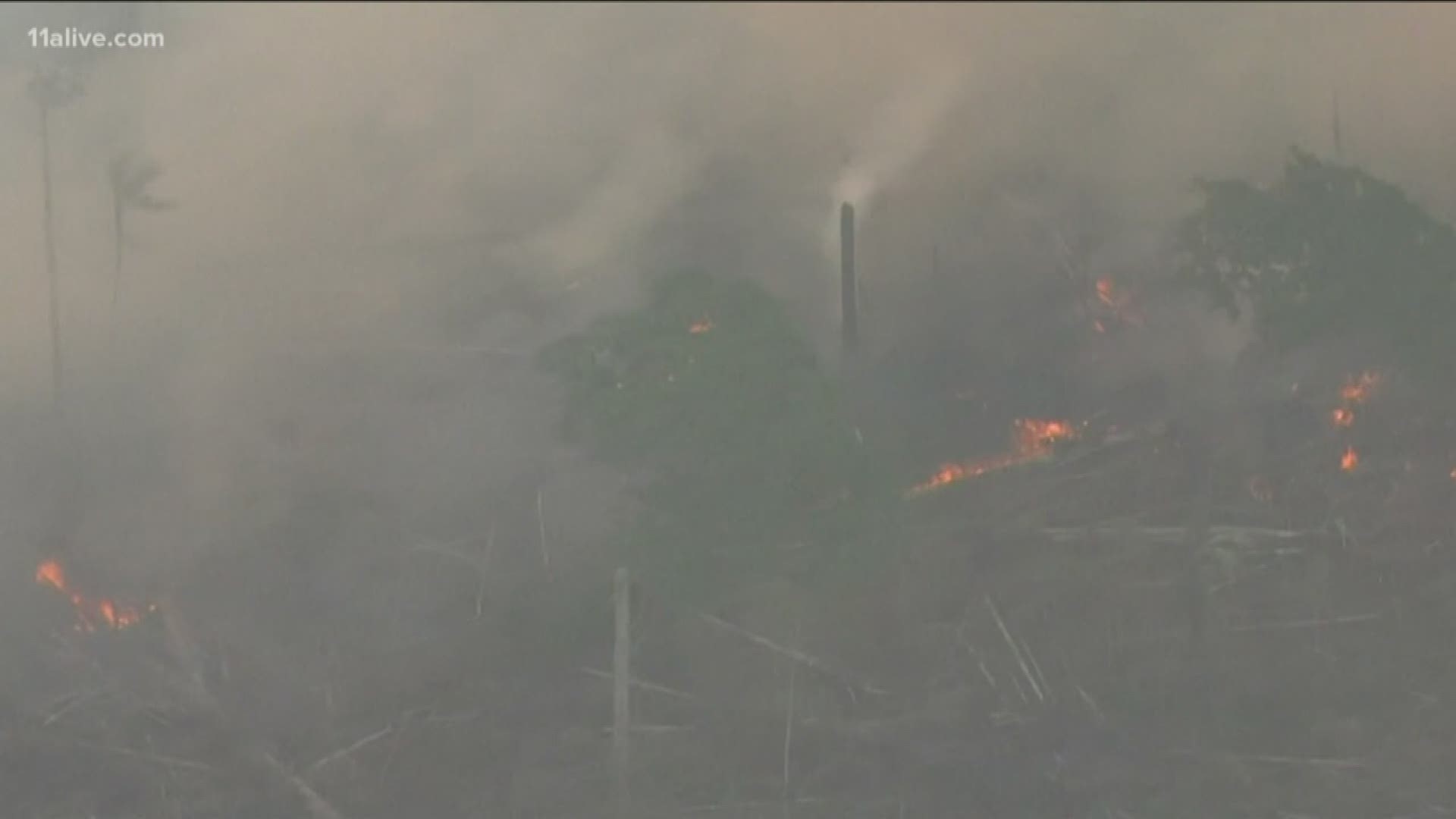 The announcement came from French President Emmanuel Macron, the host of this year's meeting of G-7 leaders, and the Chilean President Sebastián Piñera. Macron said that the Amazon represents the "lungs" of the planet and that leaders were studying the possibility of similar support in Africa, also suffering from fires in its rainforests.

Macron said the U.S. supported the initiative, although he acknowledged that U.S. President Donald Trump had skipped Monday's working session on the environment.

Satellites have recorded more than 41,000 fires in the Amazon region so far this year — with more than half of those coming this month alone. Experts say most of the fires are set by farmers or ranchers clearing existing farmland.  But the same monitoring agency has reported a sharp increase in deforestation this year as well.

Leaders of the Group of Seven nations said Sunday they are preparing to help Brazil battle fires burning across the Amazon region and repair the damage as tens of thousands of soldiers got ready to join the fight against blazes that have caused global alarm.

German Chancellor Angela Merkel said her country and others will talk with Brazil about reforestation in the Amazon once fires there have been extinguished.

"Of course (this is) Brazilian territory, but we have a question here of the rainforests that is really a global question," she said. "The lung of our whole Earth is affected, and so we must find common solutions."

Pope Francis also added his voice to the chorus of concern over the fires in Brazil, which borders his homeland of Argentina, and urged people to pray so that "they are controlled as quickly as possible." He told a crowd in St. Peter's Square that "we're all worried" about the Amazon fires. He warned that that green "lung of forest is vital for our planet."

Brazilian President Jair Bolsonaro tweeted that he had talked by phone with Israeli Prime Minister Benjamin Netanyahu, who said Israel would send a specialized plane to help in the firefighting operation.

On Friday, the president announced 44,000 soldiers would be sent to help battle the fires that are scattered across Brazil's's share of the vast Amazon, an overall region 10 times the size of Texas that is seen as a global bulwark against climate change. Only a few hundred troops had been sent so far.

Brazil's federal police agency announced Sunday it would investigate reports that farmers in the state of Para, one of those most affected by the blazes, had called for "a day of fire" to ignite fires Aug. 10.

RELATED: Outraged by pictures of the Amazon burning on social media? There are ways to help in real life

Credit: AP
Neri dos Santos Silva, center, is silhouetted against an encroaching fire threat after he spent hours digging trenches to keep the flames from spreading to the farm he works on, in the Nova Santa Helena municipality, in the state of Mato Grosso, Brazil, Friday, Aug. 23, 2019. Under increasing international pressure to contain fires sweeping parts of the Amazon, Brazilian President Jair Bolsonaro on Friday authorized use of the military to battle the massive blazes. (AP Photo/Leo Correa)

Justice Minister Sergio Moro, who oversees the police, said on Twitter that Bolsonaro "asked for a rigorous investigation" and said "the criminal fires will be severely punished."

People demonstrated in Rio de Janeiro and other Brazilian cities Sunday demanding Bolsonaro's administration do more to protect the Amazon. One boy in Rio held up a poster saying "Bol$onaro is burning our future," while people chanted: "Bolsonaro out! Amazon stays!"

Critics have accused Bolsonaro's pro-development policies of encouraging farmers and ranchers to increase efforts to strip away the forest, though the president has issued repeated pledges recently to protect the area, and backed that up by sending in soldiers and other federal forces.

Merkel noted that Bolsonaro is putting "significant forces" into the effort to save the rainforest.

Credit: AP
People protest in front of the Consulate General of Brazil in Geneva, Switzerland, Friday, Aug. 23, 2019 to denounce the words of President Bresil Jair Bolsonaro and the many fires in the forest Amazon. (Martial Trezzini/Keystone via AP)

Macron's office on Friday complained that the Brazilian leader "had lied to him" about environmental commitments.

Asked if he would speak with Macron, Bolsonaro said Saturday, "If he calls me, I will answer. I am being extremely well-mannered with him even though he called me 'a liar.'"

Meanwhile, Bolivian President Evo Morales said Sunday he would welcome aid in fighting his own country's wildfires, which have scorched about 3,475 square miles (900,000 hectares). Most of the damage has been in the forests of the Chiquitanía region over the past two weeks, but fires also have burned in Bolivia's Amazon region. Morales said at a news conference that he had accepted offers of assistance from the leaders of Spain, Chile and Paraguay.