A source says the executive board of the Major League Baseball Players Association rejected a proposed schedule by a 33-5 vote. 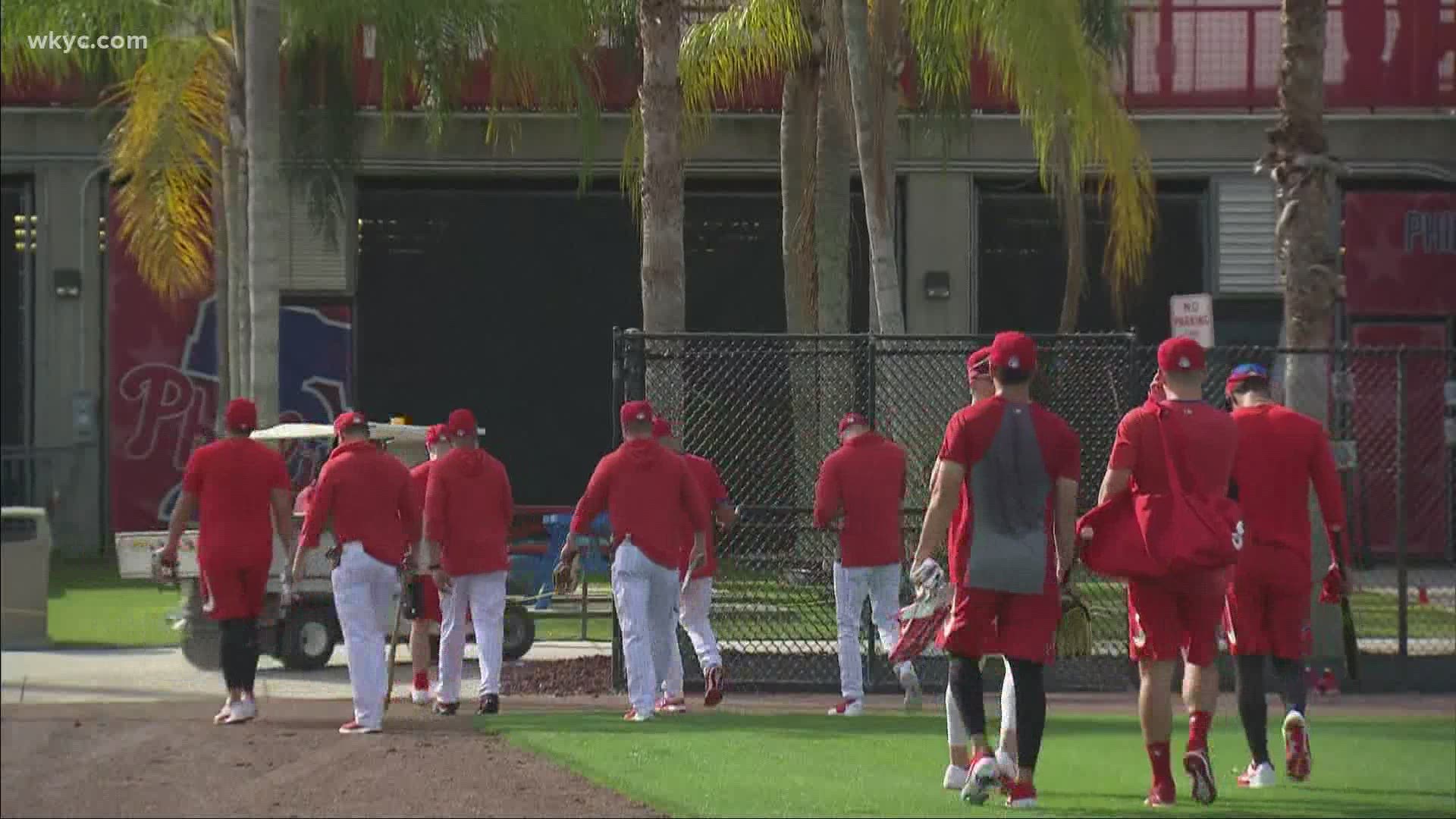 NEW YORK — Major League Baseball plans to unilaterally issue a 60-game schedule for its shortest season since 1878 after the players' association rejected a negotiated deal of the same length, putting the sport on track for a combative return to the field amid the coronavirus pandemic.

Commissioner Rob Manfred and union head Tony Clark met last week and outlined plans that included expanding the playoffs from 10 teams to 16, widening use of the designated hitter to National League games and an experiment to start extra innings with a runner on second base. But the latest version of the deal proposed by MLB was rejected by the Major League Baseball Players Association’s executive board in a 33-5 vote on Monday.

“Needless to say, we are disappointed by this development,” MLB said in a statement. “The framework provided an opportunity for MLB and its players to work together to confront the difficulties and challenges presented by the pandemic. It gave our fans the chance to see an exciting new postseason format. And, it offered players significant benefits.”

MLB's control owners approved going unilaterally with the 60-game schedule in ballparks without fans if the final arrangements can be put in place, a person familiar with the decision told The Associated Press. The person spoke on condition of anonymity because no announcement had been made.

MLB asked the union to respond by 5 p.m. EDT Tuesday as to whether players can report to training by July 1 and whether the players' association will agree on the operating manual of health and safety protocols. The schedule would be the shortest since the National League's third season.

Given the need for three days of virus testing and 21 days of workouts, opening day likely would be during the final week of July. MLB already has started to investigate charter flights that could bring players back from Latin America, another person told the AP, also on condition of anonymity because no announcements were made.

The union announced its rejection, and the vote total was confirmed by a person familiar with that meeting who spoke to the AP on condition of anonymity because the balloting was not made public. The decision likely will provoke what figures to be lengthy and costly litigation over the impact of the coronavirus on the sport, similar to the collusion cases that sent baseball spiraling to a spring training lockout in 1990 and a 7 1/2-month strike in 1994-95 that wiped out the World Series for the first time in nine decades.

It also eliminates a $25 million postseason players' pool, meaning players will not get paid anything above meal money during the playoffs and World Series, and the clubs' offer to forgive $33 million in salary advanced to 769 players at the bottom of the salary scale with lower rates of pay while in the minors: $16,500, $30,000 or $60,000 for each of them.

“It’s absolute death for this industry to keep acting as it has been. Both sides,” Cincinnati pitcher Trevor Bauer tweeted in a rare instance of a player criticizing the union. “We’re driving the bus straight off a cliff. How is this good for anyone involved? Covid 19 already presented a lose lose lose situation and we’ve somehow found a way to make it worse. Incredible.”

Teams lose what would have been a new right to sell advertising patches on uniforms, broadcast enhancements such as having players wear microphones during games and a 2020 suspension of the luxury tax that for a 60-game season projected to save the New York Yankees $8.5 million, Houston $3 million, the Los Angeles Dodgers $434,000 and the Chicago Cubs $116,000.

Manfred loses what would have been an additional $60 million to the commissioner's discretionary fund.

The union said in a statement that the “board reaffirmed the players’ eagerness to return to work as soon and as safely as possible."

“To that end we anticipate finalizing a comprehensive set of health and safety protocols with Major League Baseball in the coming days, and we await word from the league on the resumption of spring training camps and a proposed 2020 schedule,” the union said.

While the framework had included the expanded playoffs for both 2020 and 2021, and Manfred offered to drop it from the second season if players feared it would decrease their future bargaining leverage.

Spring training was suspended on March 12, two weeks ahead of scheduled openers, and the sides have reverted to the familiar financial infighting that fractured the sport in the past. An initial deal March 26 called for players to receive prorated salaries and gave Manfred power to set the schedule, but that agreement did not require MLB to play in ballparks without fans.

Teams sought additional salary concessions, claiming they would lose $640,000 for each additional regular-season game. The union was skeptical, requested additional documents and said it did not receive enough to evaluate the true financial picture.

Players refused to budge from their insistence on prorated salaries, and MLB finally agreed to that last week during the one-on-one meeting between Manfred and Clark. While Manfred called it a framework for an agreement, Clark said it was merely a proposal and further angered MLB.

At that point, the sides remained about $275 million apart after weeks of talks. MLB offered 60 games and $1.48 billion from salaries that originally totaled $4 billion, plus a $25 million postseason players’ pool. The union wanted 70 games and $1.73 billion plus a $50 million pool.

Players are expected to file a grievance, claiming MLB violated a provision in the March agreement requiring both sides to “work in good faith to as soon as is practicable commence play, and complete the fullest 2020 championship season and postseason that is economically feasible” consistent with several provisions. MLB is expected to file a grievance accusing the union of negotiating in bad faith.

Arbitrator Mark Irvings would hear the case. If the union proves a longer schedule had been feasible, each game on the schedule would be worth $25 million in salary across the 30 teams.

Reduced revenue for clubs this year is expected to cause a drop in the free-agent market, which next offseason is slated to include Mookie Betts, George Springer, J.T. Realmuto, James Paxton, Marcus Stroman and Bauer.

All the while, the coronavirus upended plans of many clubs to resume training at their Florida facilities due to a rise in virus cases in the state. Twenty-nine teams intend to work out in their regular-season ballparks, with Toronto awaiting additional talks with the Canadian federal and Ontario provincial governments.

The sides have discussed expanding rosters to 30 active players during the season's first two weeks, and 28 during the third and fourth weeks before settling in at the new 26-player limit. Because there are no minor league affiliates playing, each team would keep 60 players around.

More bickering and turmoil lies ahead. Baseball’s collective bargaining agreement expires on Dec. 1, 2021, and the virus damaged the already deteriorated relationship and became just another of the financial issues that point toward a spring training lockout ahead of the 2022 season.

“If there’s going to be a fight the time for that fight is after the ’21 season when a new CBA is negotiated. 5 years of potential change,” Bauer tweeted. “We’re doing irreparable damage to our industry right now over rules that last AT MOST 16 months.”

This dispute has played out following five straight years of relatively flat salaries, a failed grievance alleging the Chicago Cubs manipulated the service time of Kris Bryant to delay the free agency of the star third baseman and a still-pending grievance that some teams did not use revenue sharing money as the labor contract specified, part of the union’s claim teams are “tanking.”

MLB says clubs have the right to determine when prospects are ready for the majors and also are free to lower major league payrolls for rebuilding.

Further, the failed negotiations sparked criticism of Clark and union chief negotiator Bruce Meyer by agents, though there is no evidence yet that the displeasure has extended to players.

Until now, the latest openers were on May 1 during five seasons in the 1800s, according to the Elias Sports Bureau, but since 1900 it had been April 25 following the end of the 1994-95 strike. Players interrupted the 1981 season with a strike that started June 12, and the second half of a split season started on Aug. 10.