The ceremony was a celebration of Queen Elizabeth II's birthday. 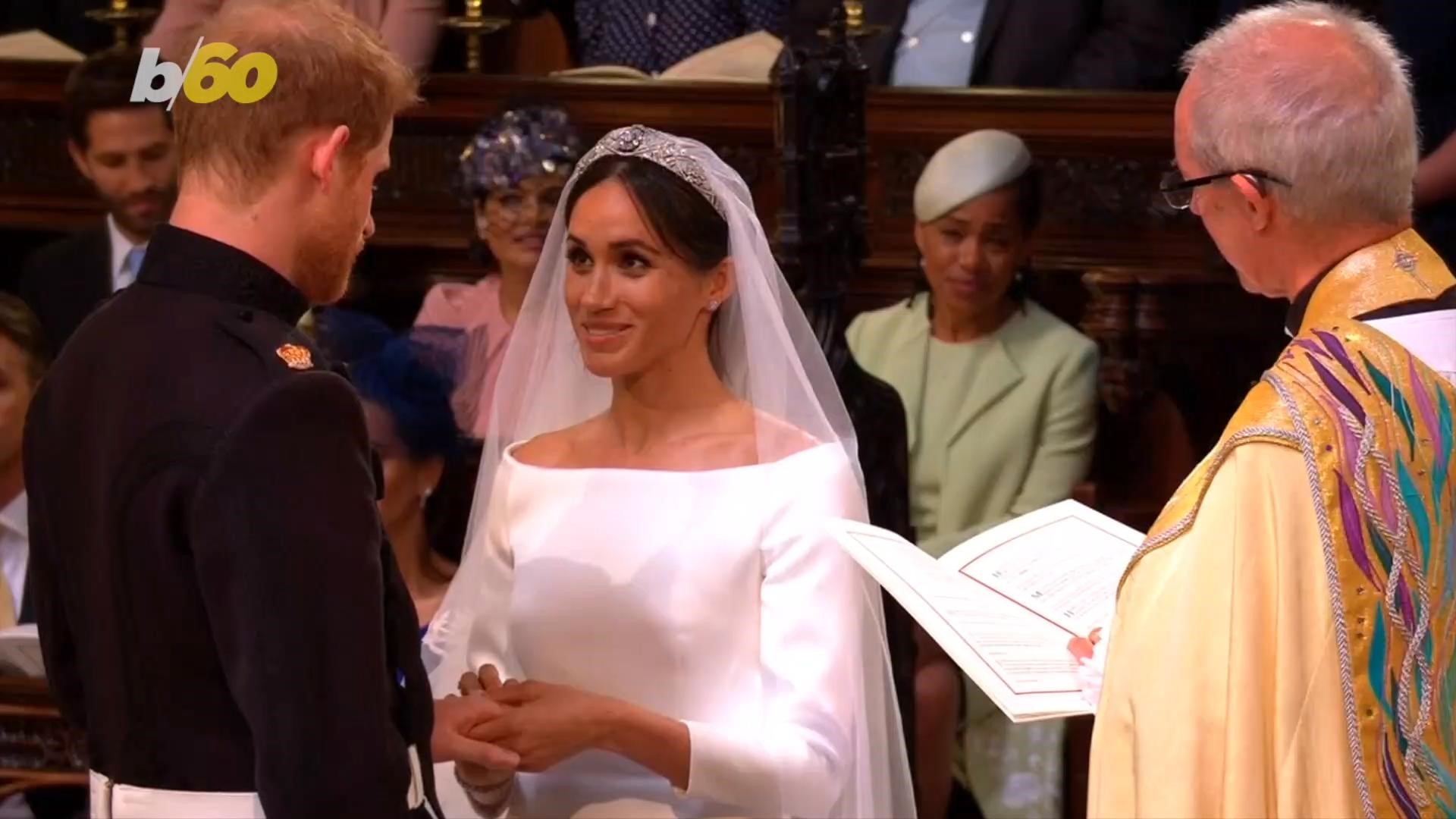 The duke and duchess, who married three weeks ago, made the short trip from Buckingham Palace to Horse Guards Parade in a horse-drawn carriage as royal fans lining the Mall cheered and waved. The couple later joined other members of the royal family on the palace's front balcony to watch the Royal Air Force fly by.

As the aerobatic display team, the Red Arrows, released plumes of red, white and blue smoke over the balcony of Buckingham Palace, the queen's great-grandchildren waved wildly. She smiled — both at the jets and the children.

The 92-year-old queen, whose real birthday is April 21, seemed vigorous as she keenly observed the event. The monarch, who recently had a successful cataract operation, watched the ceremony from a dais and inspected the guardsmen in bearskin hats and scarlet tunics.

Credit: Chris Jackson/Getty Images
Prince Harry, Duke of Sussex and Meghan, Duchess of Sussex head back down the Mall to Buckingham Palace during Trooping The Colour on June 9, 2018 in London, England.&nbsp;

One guardsman stood out: Charanpreet Singh Lall, a 22-year-old Sikh from Leicester, who wore a black turban. It marked the first time a member of the Coldstream Guards took part wearing turban — and Lall hoped it wouldn't be the last.

Trooping the Color is a ceremony deeply rooted in the history of the United Kingdom. It originated from traditional preparations for battle when flags, or colors, were "trooped" so soldiers in the ranks would be able to recognize them.

Thousands of spectators flocked to London for the annual spectacle, hoping to catch a glimpse of the glittering house of Windsor, jamming the royal parks near the parade grounds.

Credit: Chris Jackson/Getty Images
Members of the royal family&nbsp;watch the flypast on the balcony of Buckingham Palace during Trooping The Colour on June 9, 2018 in London, England.&nbsp;

The Duchess of Sussex, as Markle is now known, wore a Carolina Herrera dress and a hat by Philip Treacy. The Duchess of Cambridge, the former Kate Middleton who is married to Harry's older brother Prince William, wore a dress by Alexander McQueen and a hat by Juliette Botterill.

Duchess Kate's two eldest children, Prince George and Princess Charlotte, were also in attendance. Despite speculation, new baby Prince Louis did not make an appearance on the balcony.

Credit: Chris Jackson/Getty Images
Princess Charlotte of Cambridge, Savannah Phillips, Prince George of Cambridge watch the flypast on the balcony of Buckingham Palace during Trooping The Colour on June 9, 2018 in London, England.

The queen, who wore a sky blue coat and dress by Stuart Parvin and a hat by Angela Kelly, traveled alone in an Ascot Landau. The queen's husband, 96-year-old Prince Philip, has retired from royal duties.

Credit: NIKLAS HALLEN/AFP/Getty Images
Britain&#39;s Prince Harry, Duke of Sussex and Britain&#39;s Meghan, Duchess of Sussex travel in a horse-drawn carriage down The Mall to Horseguards parade ahead of the Queen&#39;s Birthday Parade, &#39;Trooping the Colour&#39;, in London on June 9, 2018.

The military precision of the parade unraveled slightly at the end of the day when the former chief of the defense staff, Charles Guthrie, 79, was thrown from his horse. He received medical attention.