A Navy Explosives tech fighting for his life after blast

A Navy Explosive Ordnance Detachment tech is fighting for his life at the top military trauma center, Brooke Army Medical Center, after sustaining extensive injuries from a blast while working at a medical facility in the Middle East. 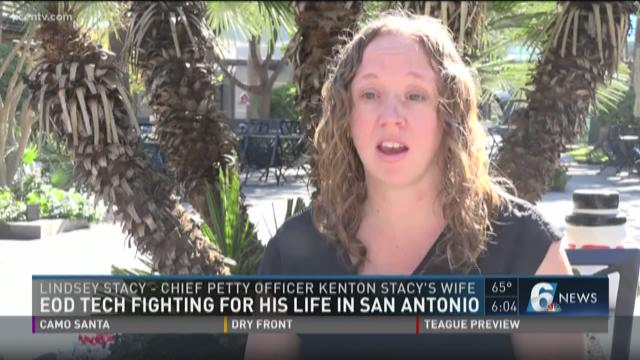 UPDATE: Navy EOD Tech Kenton Stacy is breathing on his own, as of Tuesday afternoon, according to his teammate Petty Officer 2nd Class Scott. In a post on the #StacyStrong Facebook page, he wrote "Kenton is resting today, but they took him off the ventilator to test his breathing and he was breathing on his own! Keep the prayers coming!"

A Navy Explosive Ordnance Detachment tech is fighting for his life at the top military trauma center, Brooke Army Medical Center, after sustaining extensive injuries from a blast while working at a medical facility in the Middle East.

Lindsey Stacy missed her husband--her high school sweetheart--on deployment for the past few months, but she didn't expect him to be home in America this soon.

She is trying to stay strong for her husband, but also their four children--Logan, Mason, Anabelle and Sadie. Logan, who is 10-years-old and who was diagnosed with Cerebral Palsy, visits his Daddy every day. Mason, who is six-years-old, is having a rough time with the current situation.

"He started to cry the other night, saying he doesn't want his Daddy to die in the hospital," Lindsey said. "They've seen him, but still, Daddy was in an accident, there's evil people in this world."

Kenton may be making improvements day by day, but he's not out of the woods yet, according to his wife and EOD teammate Scott.

"I can't do it alone," Lindsey said through tears.

She called Kenton her rock in life. She said he loves his job and described him as optimistic and patient in life. She hopes it will help him recover faster.

"He can parachute, dive, dealing with explosives, it's every guy's dream," she said.

Kenton's EOD teammate Scott was there when the incident happened in the Middle East. He said he wanted to be with him every step of the way until Kenton got back here to Brooke Army Medical Center where his family was waiting for him. But Scott tells Channel 6, the journey here was an emotional roller coaster.

"It's known in our profession you trust in your teammates and your teammates trust in you," he said. "Seeing a good friend hurt definitely is hard. But then also having to be the focal point of communication between his family and our command."

To learn more about the #StacyStrong online community and to get updates on Kenton's progress, click here. To find out more about how you can help the Stacy family with future expenses and unexpected requirements, click here.