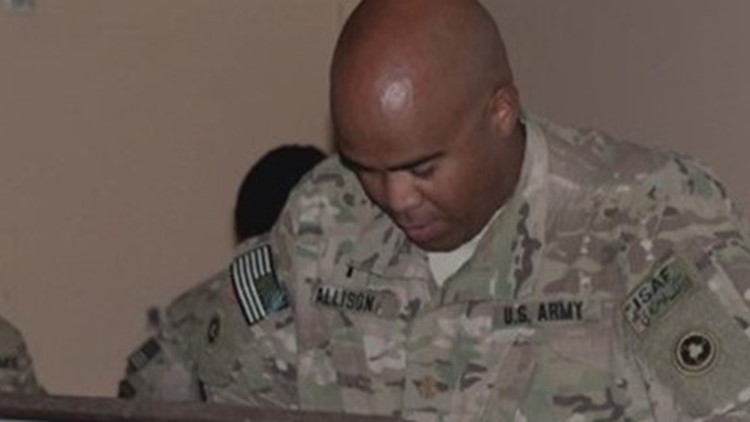 Former Ft. Hood Chaplain to be evaluated at the Mayo Clinic

TEMPLE, Texas — There is a renewed hope in Corrie Allison's fight for her husband, former Fort Hood Chaplain Larry Allison.

Larry has been homeless and living in a transitional shelter since he was discharged from the West Los Angeles Domiciliary in February, and Corrie said his mental health is in shambles, far beyond a typical case of PTSD.

After his discharge, Larry was left without a diagnosis or plan to receive treatment, but now the former Chaplain has been accepted into the Mayo Clinic in Minnesota for evaluation.

"It's a very long process to see if you can even get in," Corrie said. "They told me it could be a few weeks before they had an answer, but I got a call back in two days. They told me that the board met and they unanimously decided that they wanted to see Larry."

Corrie said VA officials have verbally agreed to allow Larry to leave for the Mayo Clinic without fear of being discharged from a volunteer-run treatment focused transitional housing program.

"They said they would give us an extension of 72 hours," Corrie said. "I presented it back to them and said, 'This is the Mayo Clinic and they've asked us for 10 days. It's a lifetime opportunity to go there and get this figured out what nobody else has been able to figure out.' So, they said they would grant those 10 days extension."

Corrie said she is waiting to have that all put into writing. She expects to have that request met no later than Monday.

When reached for comment on whether they have agreed to allow Larry the opportunity to travel that long without being discharged from transitional housing statement, the response Channel 6 received didn't quite answer the question.

The VA released a repeated statement 10 days ago:

When asked for clarification regarding whether Larry would be allowed to travel for 10 days, the VA sent the same statement.

Larry is scheduled to have his first appointment at the Mayo Clinic in Rochester, Minnesota, on April 11, according to the hospital.

For once, Corrie said she feels there is light at the end of the tunnel.

"There is nothing that would be greater than [Larry coming home]," she said. "By being able to go to the best experts in the world, I feel like that's a huge stride that I never even thought was in the realm of possibilities right now."

While she waits an answer for Larry's application to the CalVets home in West Los Angeles, which would allow him to continue his treatment and provide the constant care he needs right now, Corrie said her hopes for the Mayo Clinic are high.

"I'm so extremely hopeful we'll get some answers from the Mayo Clinic," she said. "I feel like in the 10 days we can spend there, I will get more answers than I was able to get in the last four years that I've been looking for them."

And if that light at the end of the tunnel turns out to be a train instead, Corrie said she isn't going to let it stop her.

"I'm never going to stop fighting this, there's no chance," Corrie said. "Larry is the greatest person that I've ever known and I'm lucky because I get to be his wife. If it ends up being a train, then I'm still standing stalwart. I'm not moving."