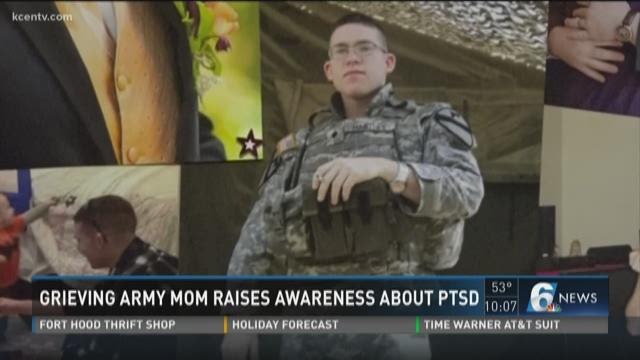 A Central Texas woman grieves the loss of her soldier son who died earlier this year after a struggle with PTSD.

Sergeant Preston Hartley joined the Army after 9/11 in a show of patriotism, but after returning from his second tour in Iraq in 2010, his mom, Lynn, said he came back changed. He was with the 1st Cavalry Division out of Fort Hood.

"He did not feel like hje knew where home was anymore, he was lost as to what he was supposed to do now," Lynn said.

He felt lost, experienced increasing anxiety, and he did perimeter checks at night around the house. Preston told his family he left a piece of himself back in the Middle East.

"We had no idea what to do," his mom said. "Your worst fear is that you would lost him over there."

But Lynn's worst nightmare happened back on American soil. He took medicine to help him with his PTSD but began self-medicating and was found dead back in April.

Lynn now has a memorial fund set up in his memory that helps veterans with PTSD work with therapy dogs. Lynn said it can cost anywhere from $10,000 to $15,000 to train and house service dogs.

"If I can share his story, get the awareness out there about PTSD, and how you can walk by a veteran and you'd never know, but they're struggling, they can't go to the mall, they can't go and eat dinner out in public," she said.

It will be the first Thanksgiving for the Hartley family without their son. They will lay a wreath on his grave at the Central Texas State Veterans Cemetery.

The organization is already making a difference, according to Lynn.

"A service dog has been matched with a veteran and they'll be training together after Thanksgiving," she said.

Lynn is hoping to create a scholarship fund to help veterans with PTSD train their own dogs to become service dogs.